“Plastic Hearts:” Why Miley Cyrus is the musical chameleon of Gen Z 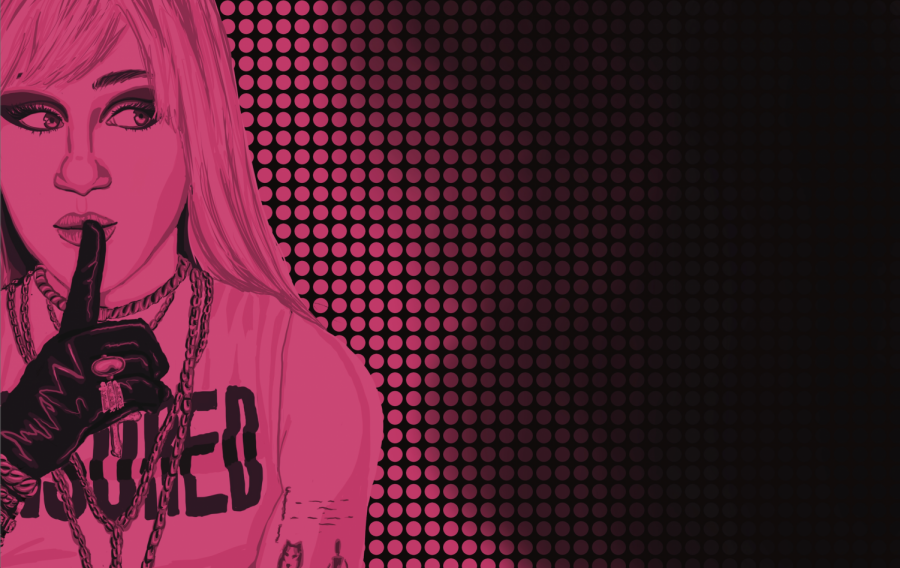 Gen-Z follows Miley Cyrus through it all. From living a double life on screen as Hannah Montana to a Tiktok trend where fans do whatever Cyrus comments. Throughout her career, fans appreciate her authenticity and knack for doing whatever she wants.

With heavy classic rock and synthpop influences, “Plastic Hearts” revives ‘80s culture. Cyrus, along with other artists like Dua Lipa and The Weeknd, took inspiration from ‘80s music and turned them into modern hits. For instance, “Midnight Sky” parallels the likes of ‘80s singer Blondie, utilizing the synthesizer that makes synthpop what it is: a large element of pop and rock music. Now, Cyrus even flaunts a blonde mullet, embodying the ‘80s rock n’ roll style.

This is not the first time Cyrus has defined an era for herself. With each album she crafts, a distinct persona accompanies her. Hannah Montana started her pop career in 2006, transitioning to the “Can’t Be Tamed” rebellion after her palatable Disney career. This was followed by her hip-hop influenced “Bangerz,” and then her experimental album “Miley Cyrus & Her Dead Petz.” She crossed into country music with “Younger Now,” and now rock with “Plastic Hearts,” possibly making her one of the most versatile musicians of our generation.

Gen Z has seen Miley’s transformation firsthand, growing up alongside her. She is authentic and not afraid to be herself, something a lot of people can respect and look up to. Cyrus keeps that “Hannah Montana” influence—a popstar with hints of country brought on from her Nashville upbringing—even today with the first track on “Plastic Hearts,” “WTF Do I Know.”

The new album features 12 original songs, one remix and two covers. The lead single “Midnight Sky,” which got rave reviews from critics, was compared to Stevie Nicks’ “Edge of Seventeen,” with the two collaborating on the remix “Edge of Midnight.” The second single, “Prisoner” featuring Dua Lipa, did not disappoint either, released a week before the album debut.

From soft country and ballads to hard-hitting pop synth, Cyrus’ unique, distinctive raspy voice is captured well. According to ‘Metacritic,’ Cyrus “is passionate and self-aware” and “proves that [she] can be derivative and still be an original.”

The songs are cohesive throughout the album. While each song sounds individual, they all flow narratively and sonically. A skip button isn’t needed while listening to this album, and it’s difficult to come up with a ranking. Sometimes I’ll be alone appreciating the slower songs like “High” and “Angels Like You.” Other times, I’ll want to dance and sing to “Night Crawling,” featuring Billy Idol, and “Bad Karma,” featuring Joan Jett.

The title track doesn’t disappoint either, with a chorus that is extremely catchy. The deep bass of “Gimme What I Want” is a hit. The last original song, “Golden G String,” is a perfectly deep song about men in power and reflects on Trump’s presidency. Cyrus is also reflective on her own career and the media’s judgemental opinions. Featured lyrics include “The old boys hold all the cards, and they ain’t playin’ gin” and “They told me I should cover it, so I went the other way.”

Themes of the album reflect Cyrus moving on from a breakup, as told in the candid lyrics such as “It’s not your fault I can’t be what you need,” (“Angels Like You”) and “And I don’t miss you but I think of you and don’t know why,” (“High”). Cyrus is self assured with this album and was even featured on the cover of “Rolling Stone” for the January 2021 issue.

“Plastic Hearts” is a nice call back to the classic rock era. There is not as big of a mainstream rock fanbase that there is for genres such as pop or hip hop on social media, but even still, Cyrus does not shy away from the genre. “Rolling Stone” touched on the idea of commercialized rock in 2018. Cyrus is bringing attention to the genre in modern times. The singer’s songs were also used in plenty of Tik Toks, which helped promote her music and bring new fans to the rock genre.

The album has been out for two months, yet every time I listen to it, I can find something new to appreciate. This feels like a natural progression for Miley Cyrus, as she seems to have found a near-perfect sound.