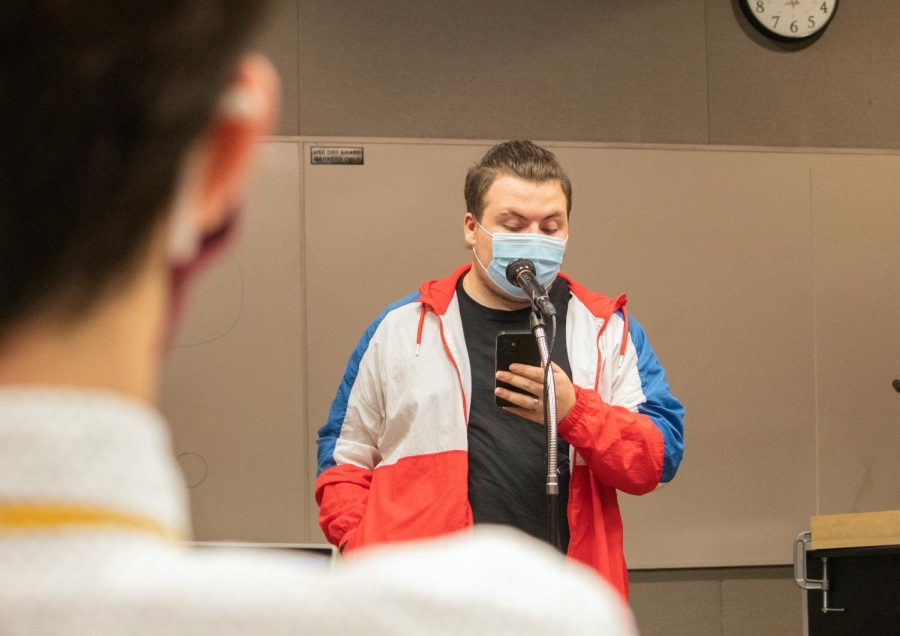 A student reads poetry at an open-mic night

By Caroline Helms and Michael McHugh

Following a year of zoom mic-nights, and declining audience engagement, the Emerson Poetry Project has returned to campus with weekly open-mic nights and a rejuvenated sense of community.

With the fall semester ushering in a new wave of first-year students eager to engage in on-campus organizations, EPP has seen a boom in membership. The change has been so dramatic that the organization has regularly been seeing full rosters for its weekly open-mic nights, where students stand up in front of their peers to present their work.

“What I will say about open mic environments in general is that I do appreciate them and they do encourage me to write more because growing up in slam really affects the way that you do your cadence, in your poetry,” said Julissa Emile. “Having an opportunity to have a place to speak the words out loud and do the poem in the way the poem is intended to be listened to is really essential to my writing.”

The new faces, paired with the organization’s older members, have brought an “engaged and vocal audience” to the readings, according to creative writing major and EPP social media manager Abbie Langmead—an atmosphere that the pandemic had taken away.

“A friend of mine asked me how you know if your poem is good; I told her you just know,” Langmead told The Beacon in an interview. “Getting snaps, knocks, or any sort of affirming sound is a massive part of performance poetry that was lost in a pandemic environment. There’s so much more engagement, and it’s so much more affirming to hear the audience understand your work.”

The open mic-nights attracted not just newcomers but also returning attendees like Emile.

“This is my first time coming to [EPP] since the pandemic,” said Emile. “I judged the last poetry slam that they had to decide their [College Unions Poetry Slam Invitational] team.”

The nights serve an emotional purpose for participants as well, as students gather to listen to each other’s work—giving knocks and snaps—and explore their inner musings in verse.

“Catharsis is a really important aspect,” Emile said. “Sometimes it’s just really nice to say the things that you need to say out loud. Poetry is really great for that because it allows people the opportunity to grieve without necessarily worrying about how [others] are going to respond.”

Senior creative writing major Leah Kindler, who serves as the organization’s president, joined EPP her first year and said that she had always seen it as a safe space.

“It’s always been my experience that anyone [can] feel welcome at EPP on the mic or in the audience, regardless of how much experience they have with poetry,” she said. “Slam poetry [or] spoken word … is also historically popular with people from marginalized communities. It’s important to have a space like that at Emerson, which can be a competitive and elitist environment for artists.”

EPP, like most student organizations, resorted to online-only meetings after the onset of the pandemic in March 2020, causing engagement to falter. Virtual poetry sessions ended up reducing the bulk of audience participation. But the group still managed to keep interest alive through various creative means—even allowing non-Emersonians to join the sessions.

Now, the organization is prioritizing outreach, as the return to in-person events finally makes possible a connection with the broader student body.

“[This year] we’re focusing on rebuilding a community and hopefully gaining some new regulars who can eventually take over the organization when [EPP treasurer] Annie Rinaldi and I graduate this year,” said Kindler.

Though the organization has largely returned to its normal operations, there is another aspect that remains up in the air—the College Unions Poetry Slam Invitational. An annual poetry slam hosted by the Association of College Unions International, the CPSUI has not been held since 2019, as COVID-19 prevented both the 2020 and 2021 springtime invitationals from happening, with no word yet on the 2022 event. However, EPP took the possible cancellation into account when looking ahead at the semester.

“I’m not really worried about not having CUPSI happen this year,” Kindler said. “It’s fun to do the competitive slams so people can qualify for the CUPSI team, but I know from competing in them that it makes EPP nights much more stressful.”

“I just want to have fun this year and hold shorter events that more people stick around for,” Kindler added.