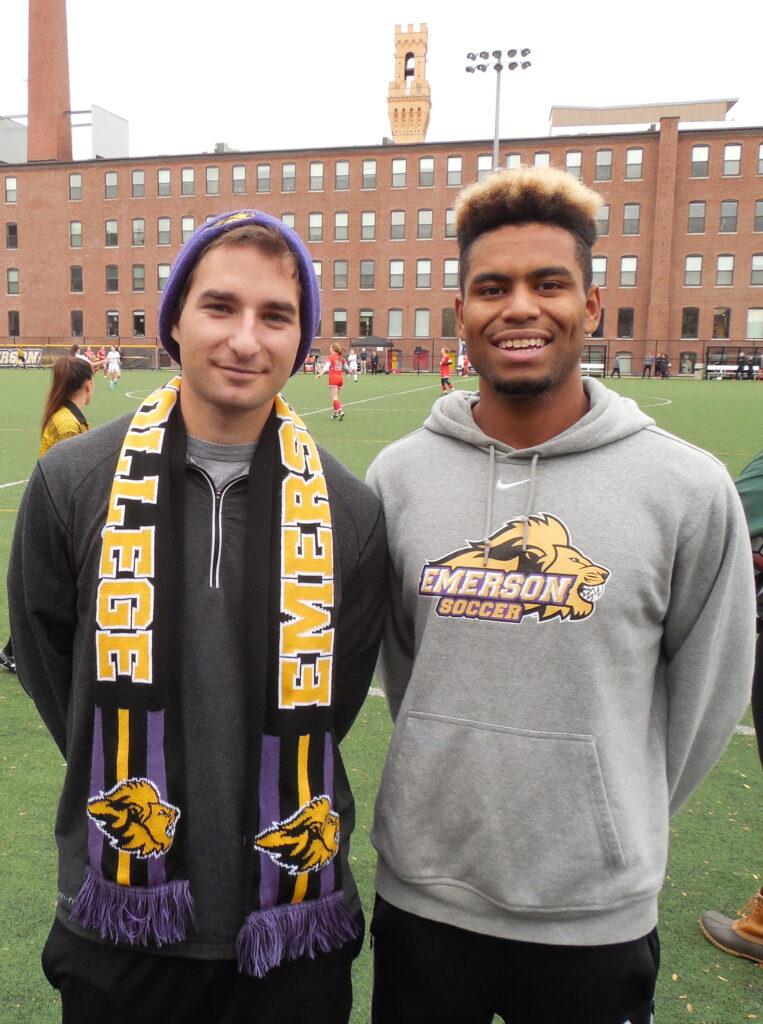 It’s a common mantra among perturbed internet commenters and Twitter users: stick to sports. When sports journalists or professional athletes share their social views, they’re typically met with at least some pushback.

Emerson women’s volleyball right side hitter Elizabeth Reid, while discussing her work with athletics’ Student-Athlete Advisory Council (SAAC), told the Beacon in February that she perceives a general feeling among non-athletes on campus that goes something like this: Lions players hold few causes near and dear aside from the sport they play, and unlike Ortiz and Kaepernick, don’t stand up for their beliefs.

In the run-up to Election Day, Reid’s peers studying political communication are shattering that stereotype. Three soccer players have traveled to New Hampshire, Wisconsin, Iowa, and Nevada to engage in the political process. Two lacrosse teammates are at work in the community—one in the governor’s office, another hoping to help immigrants make their voice heard come Nov. 8. From polling to volunteering, they are each learning the intricacies of the electoral process.

Following in Her Father’s Footsteps

Looking to follow in their footsteps, Emily is interning in Governor Charlie Baker’s press office this fall, cataloging comments made by Baker publicly for record keeping’s sake. Quinn said the scrutiny presidential candidates Hillary Clinton and Donald Trump have received for their past statements demonstrates the necessity of her task.

Quinn said her father’s connections on Beacon Hill have helped her to fully immerse herself in the business of building contacts.

“I’m able to network with some awesome, great people who have done amazing things for the area,” Quinn said. “Getting your nose out there, especially only being a sophomore, I really enjoy it. I have a strong work ethic, so I’m always wanting to meet people. That’s a major thing for me—starting a foundation.”

Quinn’s political exploration doesn’t only come under the golden dome. She joined a group of Emerson political enthusiasts on a trip to the Iowa caucus in early February, is studying polling under the direction of professor Spencer Kimball, and is planning to be in the crowd for the inauguration of the 45th president in January (hopefully Clinton, she said).

Penfield-Cyr Looking Beyond the 50 States

Quinn’s teammate, meanwhile, is at work in the community. Junior lacrosse defender Ellie Penfield-Cyr is working with the Massachusetts Immigrant and Refugee Advocacy Coalition, phone banking and pushing to get out the vote among immigrants.

Penfield-Cyr, who is primarily interested in advocacy and human rights, said she’s learned in her time away from home that election results in the States reverberate across the globe.

“The United States has more of an impact globally than people want to recognize, and this election will impact the world itself, not just our country,” Penfield-Cyr said. “I think about that a lot because, traveling, I know how much of an impact the U.S. does have.”

At Emerson, Penfield-Cyr said she’s analyzed the opinions of students within the campus community and at other colleges based on debate surveys, conducted in collaboration with professor Vincent Raynauld. Those who have attended debate watch parties at the Bill Bordy Theater will recall the questionnaires, which solicit their opinions before and after the broadcast.

In crunching that data, Penfield-Cyr gets an inside look at the climate on and off-campus. While she agreed with Reid that assumptions are made about athletes and their commitment to being informed, Penfield-Cyr said there’s a more striking divide at play within the entire student body.

“When it comes to the political scene at Emerson, a lot of people are very one-sided,” Penfield-Cyr said. “Most people are pretty liberal and left-thinking. I actually have friends here at Emerson who are more right-thinking, and they feel really uncomfortable talking about politics here, which I think is really interesting, and something to be aware of when people do categorize or judge people is that everyone has different thoughts, and to just have it be an open conversation.”

In their time away from the turf at Rotch Playground and Field, Niko Emack-Bazelais, Connor Dane, and Elias Romanos have visited enough political hot spots to accrue some serious hotel rewards points.

The trio gained experience in Wisconsin, Iowa, and New Hampshire during primary season, and presented their Iowa caucus takeaways to the International Academy of Business Disciplines in Las Vegas, Nevada.

Emack-Bazelais said the entire men’s soccer team is engaged in the Clinton/Trump matchup.

“On all the bus rides to away games there’s always political conversations going on,” Emack-Bazelais said. “It’s not only us that are facilitating them; the whole team’s fired up. Last year, it was all about Bernie Sanders, and as we’ve gotten closer to the election, obviously now Trump’s become the big conversation.”

Emack-Bazelais is currently polling Illinois voters, and will break down poll results for Kimball’s class prior to the election. Dane is scheduled to appear on WEBN’s live election results show to analyze polls like the one Emack-Bazelais is conducting. Romanos was a political fellow at the Democratic Legislative Campaign Committee over the summer, where he said he concentrated on state legislative races.

Dane said that while the soccer season stunted the group’s frequent flier status, they’ll be back on the road this week, attending a Trump rally in The Granite State now that the final whistle has sounded.

The kind of political demonstrations that Kaepernick’s protest encouraged across America didn’t make it to the Lions sidelines, but Romanos, who is also a member of the Student-Athlete Advisory Council, said those who wear the uniform of any given sports team can make an instant impact.

“I think there’s a huge opportunity as athletes to engage in community and social activism,” Romanos said, “because it does give you an instant platform.”