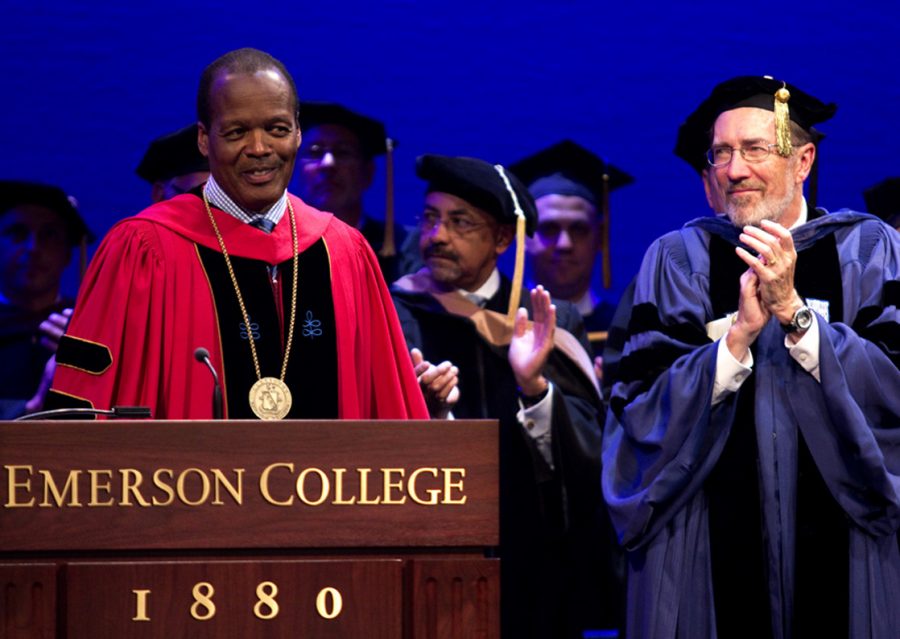 President M. Lee Pelton after his inaugural speech to approximately 250 people in the Cutler Majestic Theater on Friday, September 14, 2012.

President M. Lee Pelton said he will push to make Emerson the leading college in communications and the arts by enacting a five step process, focusing on academics, innovation, global relevance, civic engagement, and finances during his inaugural address today.

Pelton’s speech to approximately 250 audience members and 76 delegates from colleges and universities around the world in the Cutler Majestic Theatre focused on his plan and changes for his presidency. Pelton is the 12th president of Emerson College, and the first African American to fill the role.

Part of his strategic plan is to strengthen the college’s academics. He said he plans to hire 40 more full-time faculty members within the next five years. This will increase the faculty by 25 percent.

He said he also wants to replace and redesign the Institute for Liberal Arts & Interdisciplinary Studies.

“The goal of this process…will be to make clear that interdisciplinary studies are not the province of a dedicated few, but rather a common good to be encouraged, represented, and supported with institutional resources in all departments and across the entire curriculum,” he said.

Pelton emphasized the importance of communication and innovation at the college throughout his address.

“There has never been a more important time to study human communication in all of its forms,” he said.

Pelton said he plans to develop an Office of Enterprise Development and Innovation that will create different sources of revenue and a creative laboratory so students and faculty can develop new ideas and products.

Emerson is also discussing a partnership with The Berklee College of Music to create online learning courses, according to Pelton. Emerson currently has eight online classes, three of which students can receive credit for.

“An Emerson-Berklee technology partnership would extend the reach of Emerson’s educational excellence to a global audience,” he said.

Pelton said he is trying to increase Emerson’s global presence by creating an Office of Internationalization of Global Engagement. The office would work with universities around the world for program partnerships and research.

“Our graduates– wherever they live–will encounter the increasing diversity of these United States,” he said.

Along with a stronger global role, Pelton said he wants to increase civility in Boston with the new Elma Louis Center for Civic Engagement and Learning, named after an Emerson alumna who worked in the arts and helped younger people find their path.

The center will bring current civic engagement programs at the college together and create partnerships with the community, according to Pelton’s speech.

Pelton also said he hopes to increase Emerson’s finances by designing a fundraising campaign and increasing the school’s endowment by 50 percent.

In an interview with the Beacon, Pelton said he has been thinking about the plan he outlined today for a year, but the five steps came into place this summer. He doesn’t have a timeline for when the plan will be finalized, but he said he hopes to be sending information to the Emerson community in the next few weeks.

Massachusetts Gov. Deval Patrick briefly spoke to the audience before Pelton’s address, stating that he and the president have known each other for many years.

“You don’t know just how good you got it,” Patrick said. “I look forward to working with him to lift Emerson College to even greater heights.”

Throughout the address students and faculty shared reactions and photos of the event on Twitter, making #Pelton2012 a trending topic on the website in Boston.

Among the many speakers during the ceremony was Student Government Association President Tau Zaman.

“Students here are industrious, enterprising, and talented, as are you,” Zaman said.

Pelton said he is excited to officially be the president of the college.

“Being inaugurated was the greatest feeling on earth,” he said in an interview with the Beacon.

Pelton said this plan and his presidency is for the students.

“To the students—my students, our students—I wish, more than anything else, for you to make your own carols when you graduate,” Pelton said in his speech. “If you do, I promise you that the world will hear you, and having heard you, will be a better place for it.