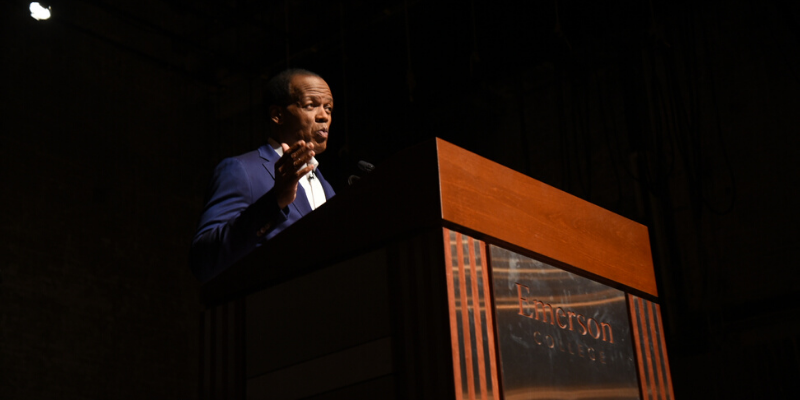 Emerson President M. Lee Pelton will leave his position in June to take over as chief executive officer and president of local philanthropic leader The Boston Foundation.

The announcement of Pelton’s exit comes at a time of great uncertainty for the college, as officials work to stave off the lingering financial and academic ramifications of the COVID-19 pandemic.

This summer will mark the end of Pelton’s ten years as the college’s 12th president. He took the helm of Emerson in 2011, after working at Oregon’s Willamette University for 13 years and holding leadership roles at two other colleges. During his tenure, Pelton led Emerson’s downtown expansion, the revitalization of the Theatre District, and the Marlboro College merger.

“It goes without saying that my decision to leave my position as your president does not come easily,” Pelton wrote in an email to the community Tuesday night. “I have had every intention of spending the next several years at Emerson, and over the past 8 months, I have been looking forward to a time that we could all be together again on campus, in person.”

Pelton will officially join the Foundation after commencement, on June 1, 2021, according to a statement from TBF. The organization began its search for a new president after outgoing CEO Paul Grogan announced his resignation in January. Grogan has led the foundation for nearly 20 years.

Pelton said he accepted the position because he felt a calling to improve the circumstances of those impacted most by the pandemic and the country’s ongoing reckoning with systemic racism.

“We know that this particular moment requires us to work as part of a broader partnership with others to dismantle structural racism, while also continuing critical work to improve LGBTQ+ and gender equity,” Pelton’s statement reads. “We must not let this moment pass without also working to strengthen cradle-to-college education, improve access to health care, close income gaps, create access to quality jobs, combat ableism, protect the rights of immigrants, and so much more.”

Pelton, who is the college’s first Black president, will be the second Black director of TBF.

“If we are truly going to address the great challenges in front of us here in Boston and in our region, we need to not only deeply engage our non-profit and public sector partners but also engage our business leaders, private sector, and donor partners more fully,” the Foundation wrote in a statement. “Lee has a long track record of strategic innovation, deep partnerships, an understanding of Boston’s greatest challenges and  a vision for what we as a city and region, and we as a Foundation, can be.”

In November 2019, Pelton was one of the guest speakers at TBF’s Annual Campaign for Civic Leadership. The next month, TBF gave a $20,000 grant to Emerson to support the Emerson Prison Initiative.

“Lee is deeply thoughtful, empathetic, and has a unique ability to lead in an inclusive way that brings everyone – faculty, staff, students, alumni and parents – together as part of the mission of Emerson,” Board of Trustees Chair Jeffrey Greenhawt wrote in the email announcing Pelton’s resignation. “He has been a trusted mentor and friend to more people than we can count. Lee has also been unafraid to speak up and speak out about fundamental issues of fairness, justice, and equality in all areas of our society.”

“Lee has been a great partner as president of @EmersonCollege, and I look forward to continuing our work together,” Walsh wrote.

The Board will form a search committee to find the college’s next president, Greenhawt said.

“Fortunately, we have time to conduct a thoughtful and thorough search,” Greenhawt’s statement reads. “We will find a new president to continue the progress we have made and lead Emerson through the next phase of our growth. We will provide you with regular updates on that process moving forward.”