President Pelton gets on the ‘gram 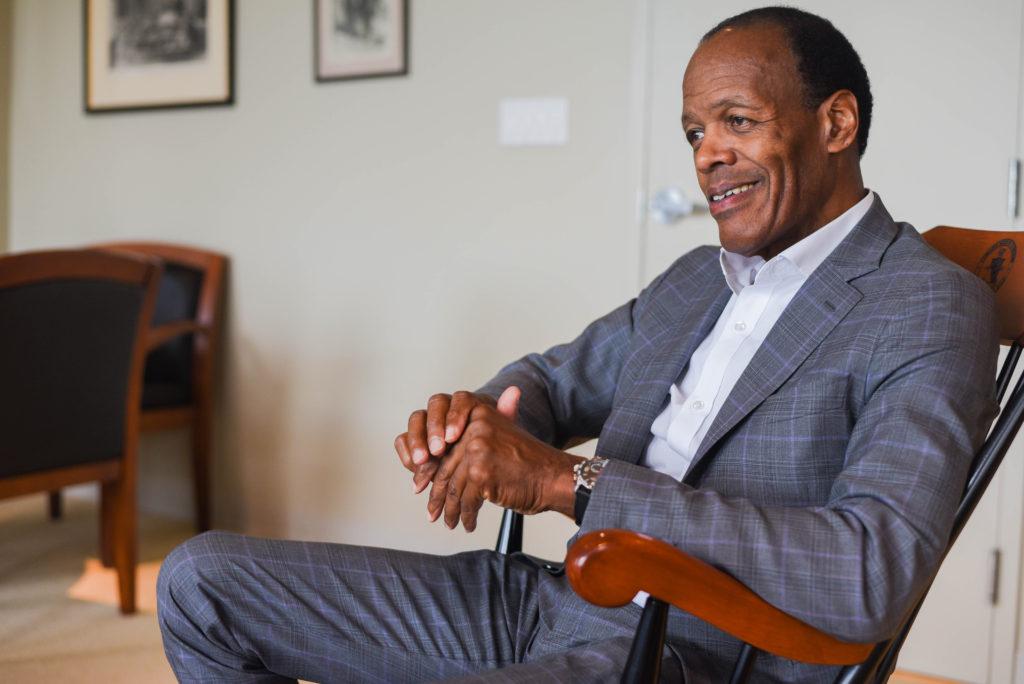 President M. Lee Pelton revamped his social media presence over the summer to improve communication between him and the Emerson community.

His new approach notifies students and staff about changes within the college through Twitter and Instagram and reveals insights about his personal life.

“I want to break down these barriers and engage in a two-way dialogue with students, rather than a unilateral email that goes out from me,” Pelton said. “This is a more intimate and 21st century way of communicating.”

Freshman Justin Schmalholz said he prefers receiving announcements via email compared to having to log on to social media.

“No matter what, I’m going to be checking my email because there’s a lot of important information coming through there,” Schmalholz said. “To click on one more email and quickly skim through it is not that bad.”

Pelton’s social media also offers general college news. He said tweets with a link to the college news website Emerson College Today could replace some of the mass emails he sends to students. However, people without social media can still access the site.

Pelton said he typically writes the majority of tweets and Instagram posts on his accounts, though he said marketing and communication administrators may write tweets under his name for news, such as construction updates. Pelton said other administrative responsibilities limit how much he logs on, but he said he hopes to post consistently this year.

The college will still disseminate important information through email, but this attempts to reduce how many students receive. Students can also follow campus news through the college’s official Instagram page, which has over 10,000 followers.

“I think that’s nice because it’s all in one place, and sometimes the emails are too excessive,” Carey said.

Schmalholz said he likes the idea of Pelton using social media more because it personalizes his role as president.

“I like how he uses social media—I think he’s a cooler president than other college presidents that I’ve seen in the news,” he said.

Already, Pelton featured a picture of Schmalholz at the President’s Reception. Schmalholz told Pelton how his mother and grandmother graduated from the college in 1990 and 1963, respectively. Afterwards, Pelton asked the third-generation Emerson student to take a photo for his Instagram.

I’m with Justin Schmalholz’ 2022, a third generation Emersonian, whose mother, Emily Schindel Schmalholz is class of 1990 and whose grandmother, Dorothy Napp Schindel is class of 1963. Thanks and much gratitude to the Schindler and Schmalholz family from Westchester, NY. Sacrebleu!!!

“I’ve only been here for two or three weeks, and I’ve already been on his Instagram page, which I wasn’t expecting,” Schmalholz said. “To just have that relationship with him and just know that he knows my face is kind of cool and good for the future.”

During the 2018 orientation, Pelton approached Carey and two other orientation leaders about jumping in a photo for his Instagram. Carey said posting about events organizations arrange makes the content more personal to students.

“Especially on Instagram, you get to see the faces and see what organizations are doing,” Carey said. “It keeps it more personal than the large mass posters, especially with highlighting smaller activities.”

Pelton said he welcomes how his professional and personal relationships might integrate. For example, faculty, students, and strangers may view posts regarding his passion for biking. He said he plans on posting race times for an upcoming Boston cycling race, Hub On Wheels.

“It’ll all be intermingled with posts to the Emerson community,” Pelton said. “That’s who I am. I don’t mind pulling the curtain back so that you see the human Lee Pelton as opposed to President Lee Pelton.”

Pelton said he also expects to come across content by Emerson students or faculty who might tease him, impersonate him, or turn him into a meme. However, he doesn’t intend to monitor or condemn comments.

“I wouldn’t call a student or a member of this community out publicly if they made an offensive comment about me,” Pelton said. “I need not respond.”

In addition to college announcements and personal feats, Pelton’s Instagram showcases topical news, such as a post commemorating a Boston Red Sox win.

“If used in the right way, it’s a platform for dialogue. It’s my hope that both Instagram and Twitter will be focused on Emerson College,” Pelton said.