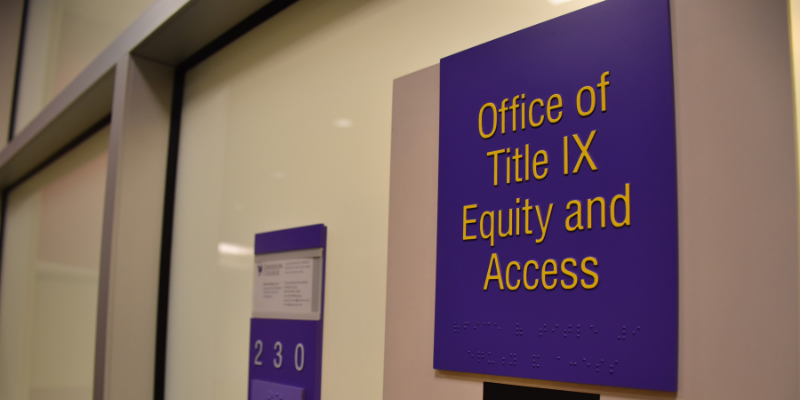 By Andrew Brinker and Tomas Gonzalez

The Presidential Working Group on Title IX policy released a draft of its findings and recommendations Wednesday, calling for several changes, including the removal of the Title IX office from the Social Justice Center, a simplification of the college’s policies, and a standing committee to review policy.

The report, which the group developed for the last seven months, placed emphasis on the Title IX office’s presence in the Social Justice Center, saying that, in order to align with guidance from the U.S. Department of Education, the office should be distanced from the SJC to present a more neutral appearance. The group said the office’s presence in the SJC may lead some students to believe that the office aligns with the center’s advocacy focus, and may be inherently impartial.

One of the group’s main findings was the inaccessibility of the college’s policies, identifying them as “dense, complex, [and] confusing,” and recommending them to be revised in a way that is more understandable to students.

The draft will only be available until June 5th, and students can give feedback on it through an anonymous form. The college did not provide an explanation for the draft’s limited availability. The working group plans to hold an in-person town hall in fall 2020.

Addressing the group’s finding that the Title IX process needs improved cross-departmental communication, the report recommended the college create a Standing Committee consisting of multiple college officials across different departments, tasked with improving communication and reviewing Title IX policy every three years. According to the recommendations, the committee should begin work by December 2020 and meet monthly, publishing the content of their meetings in an annual report.

Additionally, the report advocates for informal resolution options for students who choose not to pursue a formal investigation in order to encourage more students to file Title IX reports. These options would be available on the Title IX website.

Other departments could be charged with assisting with these informal resolutions after receiving training, such as OHRE or The Office of Community Standards. These offices would communicate with the Title IX office and document their activities. For instance, a sexual misconduct incident occurring in a residence hall would be reported to the Title IX office, but the Residence Director could also assist in finding an informal resolution.

The Title IX Coordinator role, currently held by Pamela White, is charged by the report to ensure greater clarity on the Title IX website concerning the array of options available to students who have experienced sexual misconduct. The group also suggests the Standing Committee finish a revision of informal resolution options by January 2021.

Student organizations should have individualized Title IX training, with a focus on faculty advisors and student leaders, the report suggests.

The group found a lack of transparency and communication throughout the Title IX investigation process, and advocated for weekly updates from the office to those involved in formal investigations. The Title IX coordinator would be in charge of maintaining the updates, which would be submitted to the Standing Committee on a semesterly basis for review of the timeline and content.

President M. Lee Pelton organized the group to review the college’s Title IX policy in September 2019 after a list of more than a dozen of students accused of sexual misconduct appeared on the side of the Boylston St. scaffolding, igniting discourse surrounding the college’s alleged mishandling of Title IX investigations.

The working group consists of students, faculty, and college staff, but does not contain any experts on Title IX policy. Instead, the group consulted experts on Title IX when crafting their findings and recommendations. The group is co-chaired by Dean of Liberal Arts Amy Ansell and Dean of Graduate students Jan Roberts-Breslin.