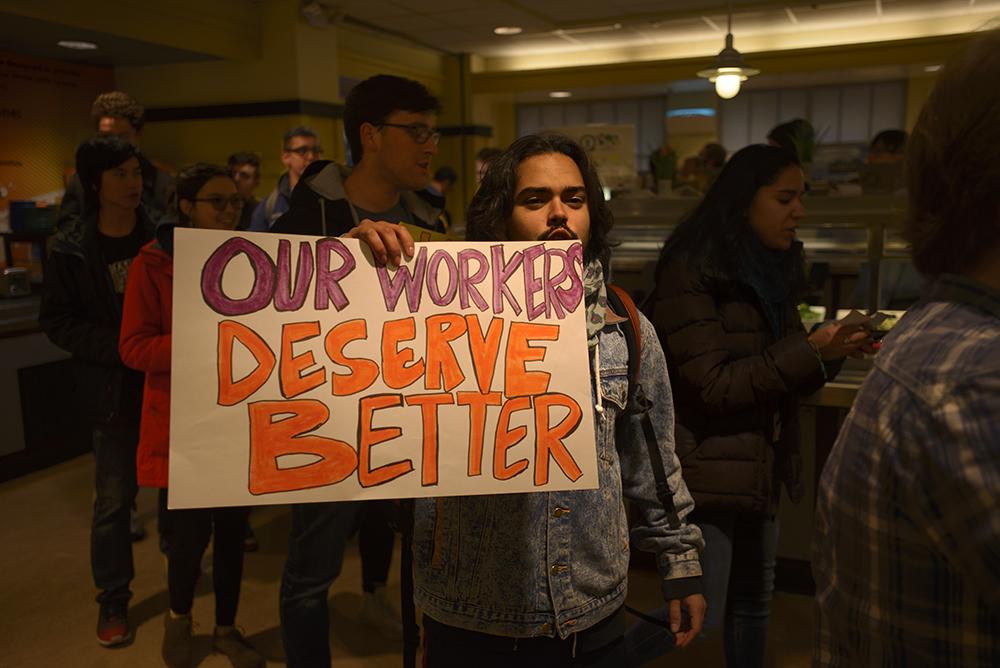 About 50 students and members of Emerson Progressives and Radicals in Defense of Employees flooded the dining hall during the 6 p.m. dinner rush on April 6 to show support for Sodexo employees undergoing union contract negotiations for higher pay.

The ralliers chanted, “A quarter raise is not a fair wage!” and “Sodexo, escucha! Estamos en la lucha!”—using a popular Spanish rallying call that means “listen, we’re in the fight.” They circled around the salad bar in the dining hall for about five minutes, then gathered in the main dining area. Bianca J. Padró Ocasio, a junior journalism major and Beacon correspondent, and Donna Papastavrou, a member of the workers’ negotiation committee, spoke to the room.

Papastavrou said she has spent 15 months fighting for a workers’ union, and now for this contract.

The workers won their first contract negotiation on April 7, according to freshman Madeline Wiryo, a member of PRIDE, and will be able to raise their pay and gain more respect.

“We just want to be here to show that we support the workers as they go through contract negotiations over their wages,” said Wiryo, a visual and media arts major.

The event finished after a half-hour with the the ralliers and many diners chanting, “I believe that we will win!” in support of the union.