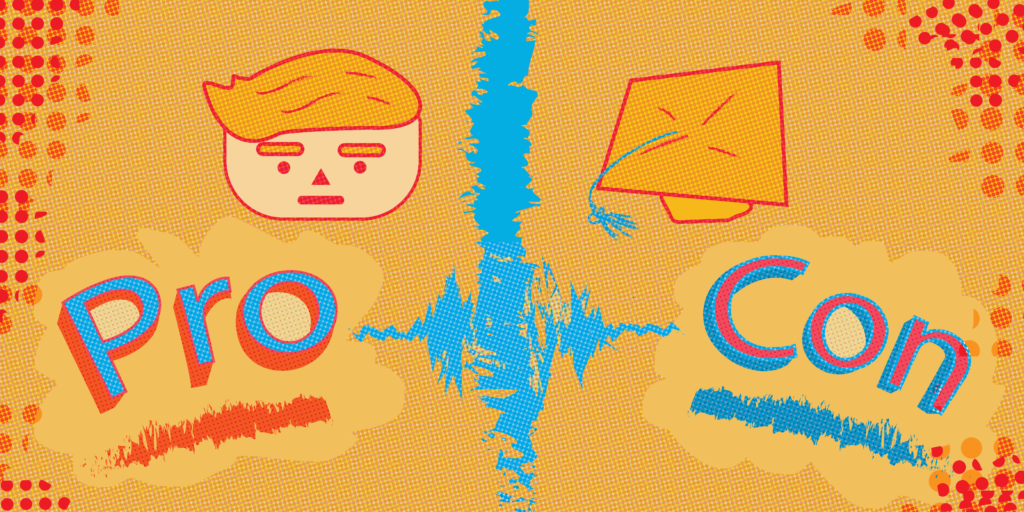 President Donald Trump signed an executive order on March 21 that connects federal funding for colleges to the enforcement of free speech on campus. The president claims conservative students have been silenced on college campuses, and the order aims to provide them with a platform to speak publicly and safely about their views. Emerson will not be affected because the college is choosing to adhere to its own free speech policies. The Beacon asked two students about their thoughts on the executive order and free speech at universities.

President Trump’s executive order protecting free speech on college campuses will act as a positive implementation for students. However, it is not entirely the president’s role to protect students on college campuses. I believe that academic administrations should uphold the responsibility to ensure that free speech is protected for all students.

Trump’s need to sign an executive order shows how college administrations fail to foster an environment of respect and inclusivity. There should be inclusiveness on campuses for every student regardless of political affiliation, religious views, race, ethnicity, or gender. It is not Trump’s role to protect free speech on college campuses, but it is a step in the right direction. The right to free speech on campus should be a given since it’s a constitutional right. But sadly, it is not.

The issue of free speech on college campuses reflects the extremely polarized political climate we live in. A few conservative students have recently been in the news for being either verbally or physically—or both—attacked on campus by those who disagree with their views. As a conservative attending a liberal school, I find this frustrating. This issue stems far beyond conservatives facing backlash at their schools—this is a nationwide problem occurring in public and private universities alike.

Trump’s executive order threatens to take away government funding from institutions that fail to protect students’ free speech, which I hope is enough for college administrations to start taking the protection of free speech on campus more seriously.

Diversity in population and in thought on college campuses creates an environment everyone can benefit from. Fostering intellectual conversations and debates about ideas with those on an opposing side prepares students for disputes they may face after college. I believe that this is something that Emerson, specifically, can work on.

The fact that the president felt the need to sign an executive order to protect free speech on campus should act as a warning to colleges and universities everywhere. It should be the sole responsibility of a college’s administration and staff to foster an inclusive environment on their campus—not the president.

On March 21, Trump signed an executive order that aimed to protect free speech on college campuses. The idea of free speech alone does not sound like a bad thing, as it holds a vital part in American democracy and should be protected on college campuses. However, certain underlying details of this order cannot be overlooked as it aims to solely protect conservative views.

Outcries from conservative students feeling as though they were silenced on their mostly liberal campuses brought this order into motion. While I recognize that conservative views have received more harsh criticisms since Trump’s election, the president’s motivation behind the order was not for minority groups to be heard, but instead to amplify the voices of those who are already on his side.

The audience at the announcement of the order only made it clearer who the Trump administration wrote it for—white conservatives. Patricia McGuire, a reporter for Inside Higher Ed wrote, “As the camera panned the room, the overwhelming whiteness of the audience was clear.”

When conservative speakers are protested at college campuses, it is often because they express very ignorant and hateful views towards minority groups. Students have protested political commentator Ben Shapiro on college campuses within the past two years based on his hateful views of the LGBTQ+ community. He said that gender and sex are not separated and that transgender people are mentally ill in a Q&A session at Ferris State University. Student protests and colleges denying speakers such as Ben Shapiro do not serve to silence conservatives, but to resist the hatred some speakers promote.

Since Trump’s election, conservatives have started expressing more far right views similar to the president’s in rallies and public addresses. This generates a lot of political turmoil on college campuses as conservative students actively try to voice their opinions.

Conservatives who do not associate with Trump’s ignorant views have a right to free speech in any setting, particularly in an academic one. However, those who use hate speech and mask it as free speech can now do this more freely under the executive order. If Trump signs an executive order for free speech, it needs to promote free speech for all and not just for those who agree with him.