Productions amid a Pandemic: how student films are being affected by COVID-19 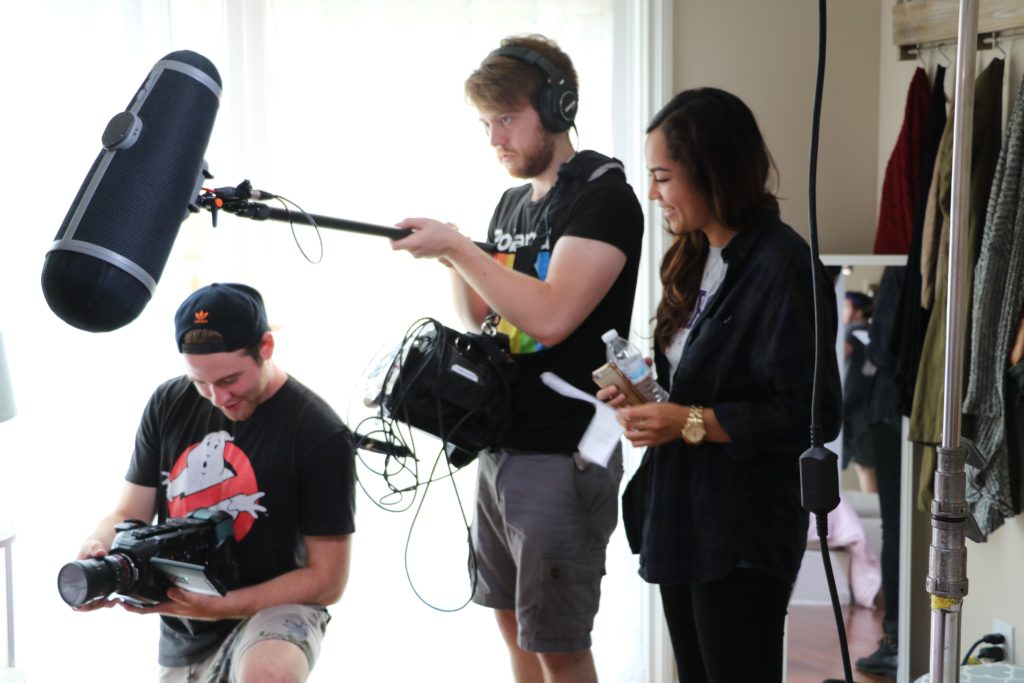 Students working on a film set.

Visual media arts majors involved in creative projects outside of school have had numerous opportunities taken away from them during the pandemic. Despite this setback, many students still managed to continue to shine in an effort to creatively express themselves through BFA productions and short films.

Matched, directed by junior VMA Marc Morales, is a 15-minute production about a college student who goes through a bad breakup, and decides to join a dating app. He starts swiping, only to later find himself trapped within the app. The short film follows Jonathan meeting with different matches. Morales is bringing this Bachelor of Fine Arts project to life with the help of cast, crew, and staff members, including Josey Finn, also a junior visual media arts major, who was brought to the team last spring as an executive producer.

Morales’ initial idea for the project sparked while swiping on Tinder for one of his friends on their account.

“I thought it was so odd how we make snap judgments of people we’ve never met based on things like how close they are to their friends, or how they’re holding their dog,” Morales said. “It’s an objectification that we encourage.”

The Matched team is set to begin filming in the first week of April. As they prepare for production, they have to ensure COVID-19 protocols are being followed. Morales said that the COVID guidelines have put many restrictions on the production, but it forces everyone to have to think outside of the box.

“We try to have discussions about what we’d love to do, while also trying to keep it realistic given the circumstances,”  Morales said. “It’s more of a matter of trying to make the best film we can now rather than trying to idealize.”

Filming is not only an opportunity for the actors and crew, but it’s also a learning experience for first-years and beginners in the film world.

“We’ve been good about the confines of COVID,” Finn said. “Of course, I would like to bring on five assistant producers and have a full team and have people we can teach. It’s a great opportunity to learn, but when there is a limited crew and you can’t do in-person calls, in-person casting, or rehearsals, you can’t bring on as many people, so everyone on set has to already know what they’re doing.”

Morales said that limited roles and equipment mean that the crew has to collaborate through trust.

“We aren’t able to touch the same equipment and help each other, so it gets very tricky,” Morales said. “This teaches you to really have trust in the people you’re working with.”

Finn said that it’s nice to have a smaller team because they are able to work more directly with one another and develop those close on-set relationships. The team has the bare minimum number of members on set at a time, with people cycling in and out to limit the number of people in one space.

Finn is also a gaffer, which is the team’s lighting manager and designer, and has to fill several roles at once because the number of team members is limited to eight.

“Having less people on set is a blessing and a curse,” Finn said. “At times last year, some sets had way too many hands and it was chaotic because there were people sitting around and people trying to find things to do. Now we all have to wear multiple hats, and fill multiple roles because we can only have so many people on set.”

This also includes having the proper COVID-19 protections for everyone, like masks and face shields.

“We have face shields and masks for the crew, and the actors have masks when we aren’t shooting,” Morales said. “As soon as we get the shot, everyone puts their masks right back on.”

For Matched, there are four different spaces where shooting is set to take place—an apartment, restaurants, and a park in Harvard Square. With limited locations, more set designing is required, which in turn means a bigger budget.

So far, the team has successfully fundraised over $2,000 through the link in their Instagram, @matched.bfa. The donations are helping the team obtain protective equipment like face shields, as well as fund the set designs.

Adapting to change is something that actors and actresses have also had to adjust to during the age of COVID. First-year communications major Sabrina Carr is starring in the one-woman short film, But I Made Cake.

The on-campus student production is directed by first-year student Julia Cross. The film is about a girl who gets very emotionally invested in relationships with men and uses them for validation. When she doesn’t get what she wants, the pink scenes are soon filled with gore.

For Carr, learning how to apply special effects makeup was one of the many other roles she had to take on as an actress.

“During the filming process, I had to do all of my own makeup and effects because of the COVID restrictions,” Carr said. “I was learning how to do it on Zoom with other makeup artists.”

Carr described the filming process as long and tiring. Some scenes had to be filmed six to seven times to get multiple angles for each shot, because the number of cameras was limited. The filming spanned three days in a friend’s apartment towards the end of March, with each day lasting almost 12 hours for Carr.

“After each day I would just come back to the dorm exhausted and fall asleep after standing under the hot lights for hours,” Carr said. “That’s part of being an actress and I love it.”

Filming was not the only aspect Carr loved about the process. The team also did a promotional photoshoot for their Instagram, @butimadecake_film. In the posts, Carr is covered in blood while also costumed in her pink, girly clothes. She is also pictured wearing her mask for safety during the shoot. The only time she was able to take off the mask was while filming.

“I think I’m pretty lucky to be able to film without a mask,” Carr said. “A big part of acting is showing facial expressions, and especially in this film because there isn’t a lot of dialogue since it’s a one person cast.”

Deniz Akurek, a freshman visual media arts major, also said that wearing masks makes the film less personal. Akurek has created four projects throughout his first year, which can be found on his YouTube channel @Denizakyurek. The filmmaker says that he looks forward to increasing crew numbers and a decrease in masks once the pandemic is over.

“What I’m most excited for is city films without people wearing masks on the streets,” Akurek said. “Boston is a beautiful city and we can’t show that because even now if the actor isn’t wearing a mask, everyone else in the back of the film is and it looks like a COVID film.”