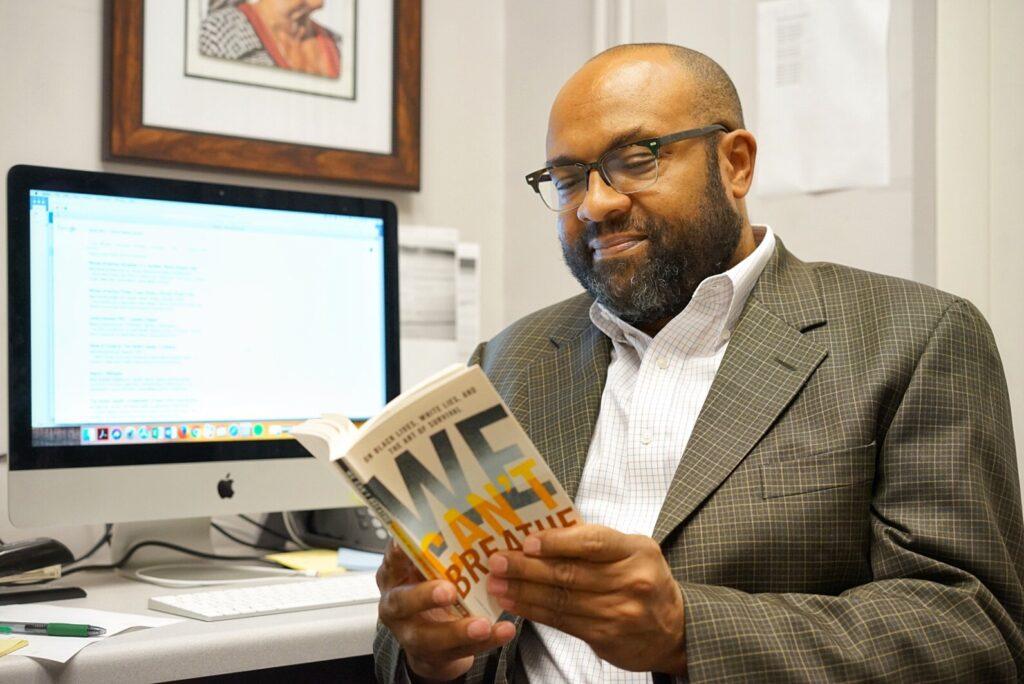 Jabari Asim reads "We Can't Breathe," the book where his essay "Getting it Twisted" originally appeared. Tivara Tanudjaja / Beacon Correspondent

When Associate Professor Jabari Asim received a call from the editor of “Best American Essays” congratulating him on earning a spot in their 2019 edition, he was surprised. He had never submitted his essay for consideration in the first place.

The essay, “Getting it Twisted,” originally appeared in Asim’s collection “We Can’t Breathe,” released in October 2018. The Yale Review published the essay in 2019, then, unbeknownst to Asim, submitted the piece to Robert Atwan, an editor of the “Best American Essays” collection who surprised Asim with the news over the phone.

The collection, published by Houghton Mifflin Harcourt in print and online, features essays from writers across the country. Atwan, series editor since 1986, selected the essays along with 2019 guest editor Rebecca Solnit.

“I’m pleased to be published whenever I’m published,” Asim said in a phone interview. “Recognition is always good—it’s always welcome, always reassuring. Writers are somewhat neurotic, as you know, and affirmation is good, so I’m very pleased.”

Inspired by Toni Morrison’s “Playing in the Dark,” Asim said he tackles the master narrative that exists in America—that the government alters the public’s view of race-related issues to maintain a desired narrative. Asim also explores the hypocrisy inherent in revolutionary America through the contrasting views of Thomas Jefferson, Benjamin Banneker, and other revolutionary figures.

“If you look at a majority of instances in which unarmed black people are killed by police, the spokesperson who handles the question, the media figure, is almost always a black person,” Asim said. “I think this is intended to nullify the argument that police officers are racist and also to discourage black people from being fully expressive in their response and their criticism. I think that is a manipulation of state, that is a ploy.”

Asim added that the master narrative questions the truth about what it means to be American and attain the American dream.

“The American way of life is, to a certain extent, dependent on myth, dependent on false story,” Asim said. “The primary false story is that if you work hard and do well and behave according to some imagined moral metric, you will succeed. In other words, good citizenship will be rewarded. There is considerable evidence day by day to suggest that is far from the truth.”

“It’s a powerful kind of unveiling of the way in which our current norms are supported by a particular narrative,” Spears said in an interview. “[Asim’s] essay provides a whole different slant into a space where, if you’re not studying the field, or if you’re not paying attention to the common discourse, you could miss that there are multiple stories to be shared.”

Asim said he wrote the essay in hopes to hold the government responsible for legislation based on disinformation and deceit.

“I never want to separate the government from the people,” Asim said. “The government does what it does with the tacit approval of its citizenry, so one of the things I always get back at is how government is enacting policy based on lies about people. And how are American citizens responding to that? In most cases, passively accepting it, if it doesn’t affect them.”

Asim said his essay calls upon those passively accepting American reality to push against it. He also wrote “Getting it Twisted” as an expression of his inner beliefs.

“There are ideas, thoughts, and emotions I have inside me that I need to get out,” Asim said. “My hope is that someone else will find it persuasive enough to pay attention and respond in some way.”

In “Getting it Twisted,” Asim urges other African-American writers to advance the conversation surrounding racial inequality, writing, “We continue to write and resist. In the tradition of black bards known and unknown, we compose with purposeful fury.”

“There is a lot of quality work that is created and produced that lives and breathes in communities that tend to be more on the margins, so those voices are not included,” Spears said. “All colleges have an ethical responsibility to engage with students about the breadth of work that’s out there and that actually provides a different slice of what the American experience is.”

Roy Kamada, chair of the Writing, Literature and Publishing department, said Asim’s essay embraces a level of critical thinking that the department hopes to teach their students.

“At the heart of what we try to do at WLP and at Emerson, and what we try to do as teachers across the nation, is we try to encourage critical thinking, and that whatever your role is, you’re always engaging in your full critical faculties,” Kamada said in an interview.

Many professors across the department incorporate discussion on the master narrative, according to Asim.

“I know a number of my colleagues, their curriculum and their syllabus are designed to counter the master narrative,” Asim said. “There are some progressive instructors who bring things to class, bring information to class, that students may not have encountered before coming to Emerson.”

As for future publications, Asim said he plans to publish two poetry books, four children’s books, and two nonfiction texts, all under contract with publishers. Asim recently began writing his next collection of essays for Simon & Schuster under the working title “American Struggle.”

“I’m not initiating this conversation—this is a conversation that has been going on as long as people have been writing and thinking and debating in the United States and elsewhere,” Asim said. “I just want to add my voice to that discussion.”