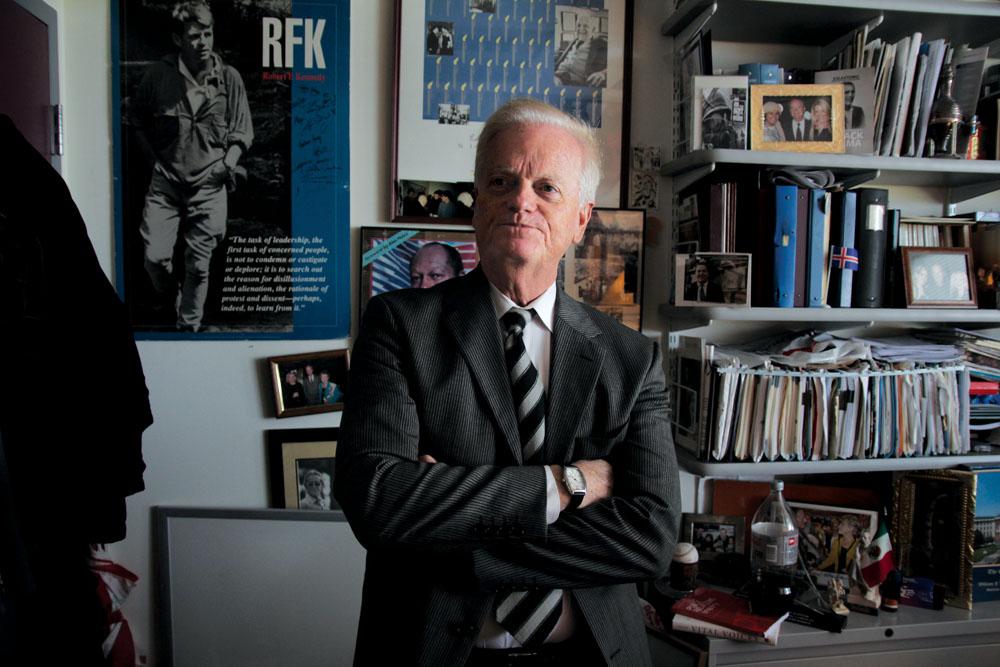 Stepping into Gregory Payne’s office on the eighth floor of the Walker Building is like entering a political time warp. Photos of the professor with presidents past, memorabilia from countless election campaigns, and stacks of books on politics fill the walls and shelves.

But the many pieces of Payne’s experiences provide just a sliver of insight into his professional background. The communication studies professor and advisor to Emerson’s Communication, Politics, and Law Association has been involved in public affairs since he was a child witnessing the 1960 election between John F. Kennedy and Richard Nixon.

“My grandmother said to me one day, ‘You need to put a sticker on your bicycle’ … and I said, ‘Why?’ and she said, ‘Because John Kennedy is running for president, and he is a Catholic. If he is elected, you will have something in the cafeteria that you hate very much: fish,’” Payne said. “So I suddenly became very excited about voting for Nixon. And I followed that campaign, and wrote letters to Nixon, and he wrote back.”

Although Payne — in his 60s — began his career in politics as a Republican, the professor now leans to the left. But it wasn’t until he saw Robert Kennedy speak in public that he said his opinions changed.

“What struck me with Kennedy in this real life changing moment was… You could see how he had mellowed, and he had also changed his ideas on the war in Vietnam,” Payne said. “I switched completely and was a big idealistic person for Kennedy and was a real true believer.”

The power of that speech — and of public speaking in general — has stayed with Payne throughout his career. He has written speeches for former Los Angeles Mayor Tom Bradley, former Senators Hillary Clinton and Robert Dole, and former Boston Mayor Ray Flynn, to name a few. But speech writing, Payne said, is a craft that has significantly changed over the years and no longer requires the same level of expertise it once did.

“Speeches truly are the currency that keep cultures together. They are narratives that great leaders are able to articulate and use to persuade people,” Payne said.

But the hot button issues of campaigns today, he said, mixed with the media’s effect on public opinion, have reshaped how speeches are presented. Now, campaign speeches are more about including the perfect sound clip for a news package versus containing what Payne called a moral compass.

“I think what we’ve seen in today’s political campus is shortening of speeches to where we’re looking for soundbites,” the professor said. “You don’t really hear great speeches like the Gettysburg Address, the greatest speech in American history.”

The many speeches Payne has had a hand in writing, mixed with his experience on the campaign trail and working with diplomats, transfers into the classroom. In his Presidential Politics class, Payne said he invites visitors on a weekly basis to lecture on topics surrounding politics and public affairs. Speakers have included Alex Goldstein, the press secretary for Massachusetts Governor Deval Patrick, journalists visiting Emerson from Indonesia, and a Skype session with a journalist from Jakarta.

“I like to make it a microcosm of what it would be like to work in the war room of a presidential campaign,” he said.

Sophomore Kassandra King said she has worked with Payne since she started at Emerson. She has been involved in CPLA and is currently in Payne’s Presidential Politics course. She said she enjoys the different speakers, and that Payne’s background in politics and the stories he shares are interesting to hear about.

“What I think is cool about him is that he brings the fun, easy going personality that he has to extracurriculars and to the classroom,” the political communication major said.

Since his start at Emerson in 1985, Payne says he has seen the college solidify its role in political communication. Along with Assistant Journalism Professor Michael Brown, and previous Emerson faculty Walter Littlefield and Anthony DeLuca, Payne developed classes and extracurricular programs for students and created undergraduate and graduate political communication degrees.

And although the political communication curriculum has prepared many for careers in advocacy, public affairs, and diplomacy, Payne said there is still more that can be done to engage Emerson students in everyday politics. He said he would like to see more collaboration between the political communication department and the journalism and marketing departments, and to see students go beyond the classroom to get involved with the community.

“All great movements started with one person,” Payne said. “This is an exciting time to be in. You have incredible challenges.”

One of the challenges and mistakes Payne said he faced during his career was not voting in the 1968 presidential election. It was during this campaign cycle that he became a member of the Democratic party to support Robert Kennedy— and the year that the leader he chose to follow was assassinated.

Payne said by not voting, he allowed others to vote for President Nixon. He said he urges students not to make the same mistake he did.

“Our president and our leaders are only as good as the people that we elect,” Payne said. “And unfortunately, the majority of Americans today don’t vote. It’s a treasured part of democracy, and the fact that they don’t vote allows others to vote for them.”