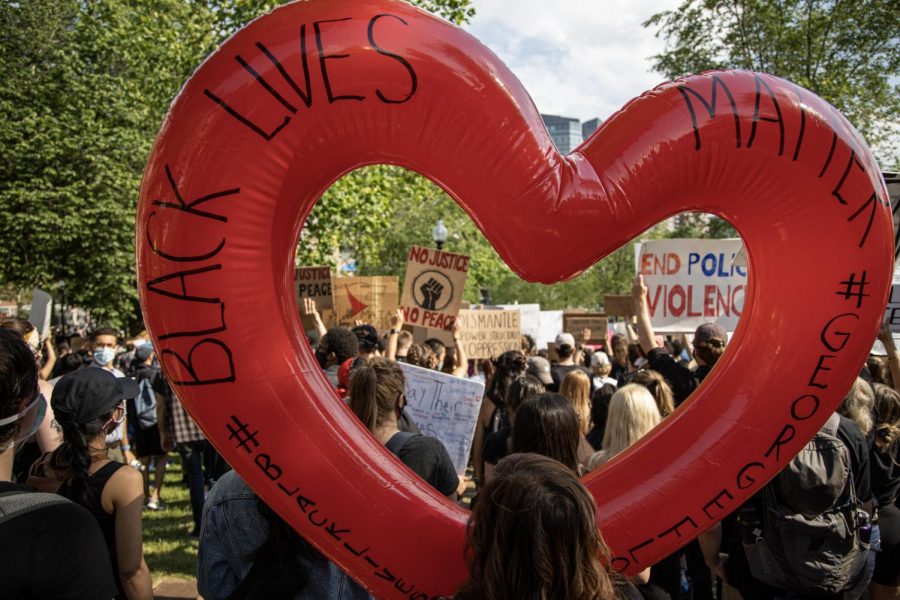 A woman holding an inflated red heart at Boston's third day of protests in response to the police killing of George Floyd.

Boston joined cities nationwide for a third day of protests Wednesday in response to the police killing of George Floyd, with organizers remaining peaceful for the entirety of the three-hour march from the top of Boston Common to the Parkman Bandstand.

Thousands of protesters gathered at 3:30 p.m. for speeches from members of Mass. Action Against Police Brutality, the Boston Socialist Alternative, and other members of the crowd. Speeches called for the defunding of the police, increased awareness for other unvoiced instances of racist police brutality, and denounced capitalism as well as other systemic forces that they say can lead to violence.

Matthew Burchfield, a member of Boston Socialist Alternative, spoke about the inadequacy of police training and how funding should be allocated to education and housing instead of the police department.

“Something like de-escalation training, and implicit bias training—I’m not against those, but it’s like putting a bandaid on a gunshot wound,” Burchfield said over a megaphone from the steps of Boston Common ascending towards Beacon Street.

Burchfield’s speech was followed by a speech from fellow Socialist Alternative member Robin Herd, who criticized police across the country for upholding money and material gain over the lives of citizens.

“Police are here to protect capitalism and property and money over all of us,” Herd said.

Somerville resident Nigel Baugh took the megaphone to discuss an instance of injustice towards black people, which he said has gone largely unheard. On this day eight years ago, Baugh said his friend Charlene Holmes was killed in a drive-by shooting. He said the police barely looked into the case, and eight years later, it remains closed.

“Instead of the fucking police being over here, they need to go find the person that killed my friend!” Baugh yelled into the crowd.

Burchfield and other members of the Socialist Alternative led the initial march in a lap around Boston Common with a banner that read “Defund the cops! Fund education and housing!” and chants of “Hey hey ho ho, racist cops have got to go.” As they marched, Dorchester resident Julia Shee sat atop a bench with both her arms raised, reminding other non-black participants of their role in the protests.

“White people are guests, they are here in service of their black neighbors,” Shee said in an interview. “It’s time that we build a community that’s not so segregated as we see within the city.”

Protesters took a second lap around Boston Common that ended with five people performing a “die-in”—a demonstration where individuals lie down on their stomachs for 8 minutes and 46 seconds in honor of George Floyd—surrounded by the kneeling procession. The march then trickled into Tremont Street, where it continued down towards City Hall Plaza and looped up back to Boston Common through Bowdoin Street. Leaders of the march brought the protest to the Parkman Bandstand, where a second “die-in” that included hundreds of supporters took place before a few concluding speeches.

Antuan Castro Del Rio, from Colombia, delivered one of the final speeches from the Bandstand while gripping the leash to his Corgi. His final remark included reciting the phone number of the Massachusetts Executive Director of Public Safety, which supporters jotted down into their phones. He reminded the crowd that the issue of racism is not unique to America.