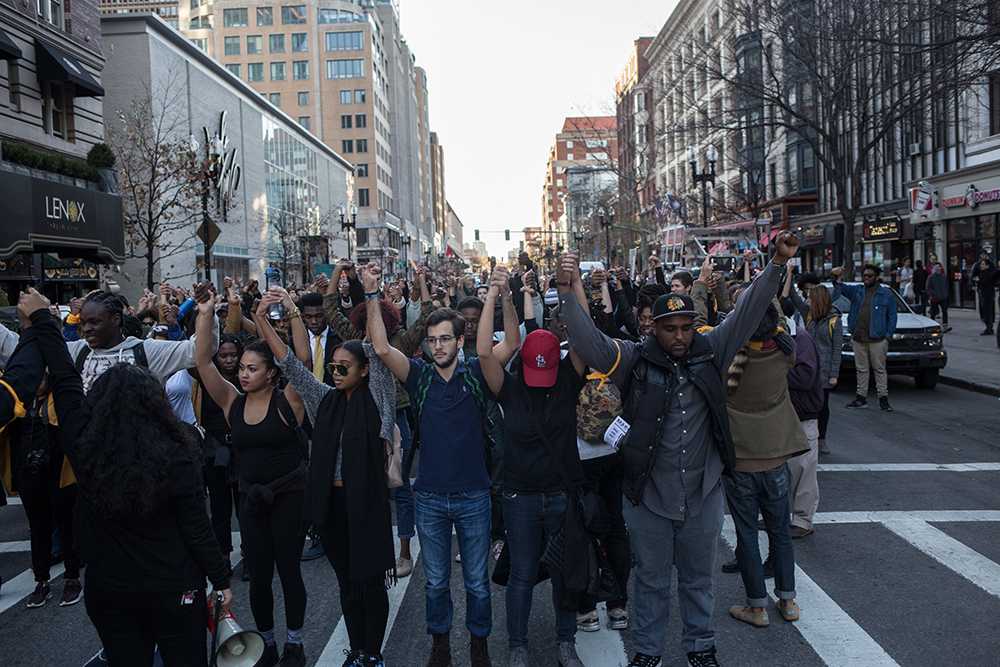 Black and brown college students have made headlines and front pages across the country, fists thrust in the air, protesting for a more equitable education in and out of the classroom. At Ivies and state schools, peaceful—but strident—protests stand in solidarity with those who say professors and administrators react obtusely to allegations of discrimination, appropriation, and hardship—if they react at all. What a time, as two of today’s greatest poets said, to be alive.

Once heard mostly in the context of academia, buzzwords and phrases—ones like “right to exist,” “safe spaces,” and “we pay for education, not discrimination”—are now the stuff of critical essays and opinion pieces.

In The Atlantic, Conor Friedersdorf presented some crazed caricature of “safe spaces” and “perceived indignities”: the students at Yale calling for university administrator Christakis’s job were profoundly intolerant, beholden to some idea of an academic nanny state. His essay, titled “The New Intolerance of Student Activism,” made the rounds on my Facebook feed, with former teachers and current friends sounding off on all the ways in which this protest (and a similar one at Mizzou earlier this month) was deeply misguided.

But all too often the professors and high-minded columnists that analyze the pitfalls of some blanket definition of “student activism” fundamentally misunderstand the boundaries of these protests. Authentic, lasting change is hard to affect on the clock, and the four years between orientation and graduation is a nearly impossible timeline with which to address deep-seated discrimination in an effective way. As early as 2006, the Harvard Crimson reported that money made from slavery still flows through nearly every Ivy League institution.

So of course these protests will be messy, and they ought to make us all uncomfortable. We The Protesters activist Deray Mckesson tweeted a great reminder in September that I still think of often: “It is odd to see folk push against a monolithic notion of blackness and simultaneously push for a monolithic notion of black organizing.” Last Monday, student and faculty protesters at Mizzou shoved and shouted at a student reporter who tried to photograph a demonstration, which isn’t an action I can cosign, but it is one that I’m willing to work to understand. So many of these protestors are students, trying to wean themselves off the teat of slacktivism, trying to suss out the media that hurts from the media that helps. In the face of this hesitation, critics have chosen to tone-police.

Another important aspect is youth. This isn’t generational or in some way unique to #millennials with their #emojis—Emerson’s own EBONI staged an impassioned protest in 1969 in the office of Richard Chapin, a former college president. Age might not be anything more than a number, but many of us are feeling these things for the first time. My parents have been black in America for half a century; police brutality and the deaths it has yielded in the last year never shocked them. I picked up a James Baldwin essay for the first time four years ago; give me a little time to navigate these fresh stings.

In the discourse surrounding these student demonstrations, there seems to be a hard line drawn for no apparent reason. Is it not possible to be critical of a protest without denying that students of color have, in fact, felt the things they describe? In that Atlantic essay, Friedersdorf dismisses the fact that that students at Yale and Mizzou and across the country have been silenced and not allowed to “exist.” He’s right in one sense—there are more painful experiences. What he doesn’t acknowledge is how many of these happen inside of a classroom.

I’m not an activist; I’m a journalist. I don’t need a “safe space” where my voice and ideas are trusted without the dignity of well-reasoned critiques. But please, allow brown students emotions. Last month, my voice shook when a professor implied that the opinions of his white wife on blackness were of equal weight to my own. I was the only black student in that classroom; I live in this black skin everyday, and I wasn’t even seen as an authority on it. This is what it feels like to be silenced, to be—as so many Mizzou protesters have said—not allowed to “exist,” under the guise of some bogus form of objectivity.

Instead of “challenging” activists to present needs in ways that we’re more comfortable hearing, it’s incumbent on us all to understand—there are forces at work in these protests that are more than the narrative of being angry that an administrator “won’t listen.” There are so few meaningful ways for students to even discuss internal change in higher educations—have you ever seen a Student Government Association that was constitutionally able to make real decisions that don’t have to be cosigned by a dean? We shouldn’t turn a blind eye when students react in the only way they can.