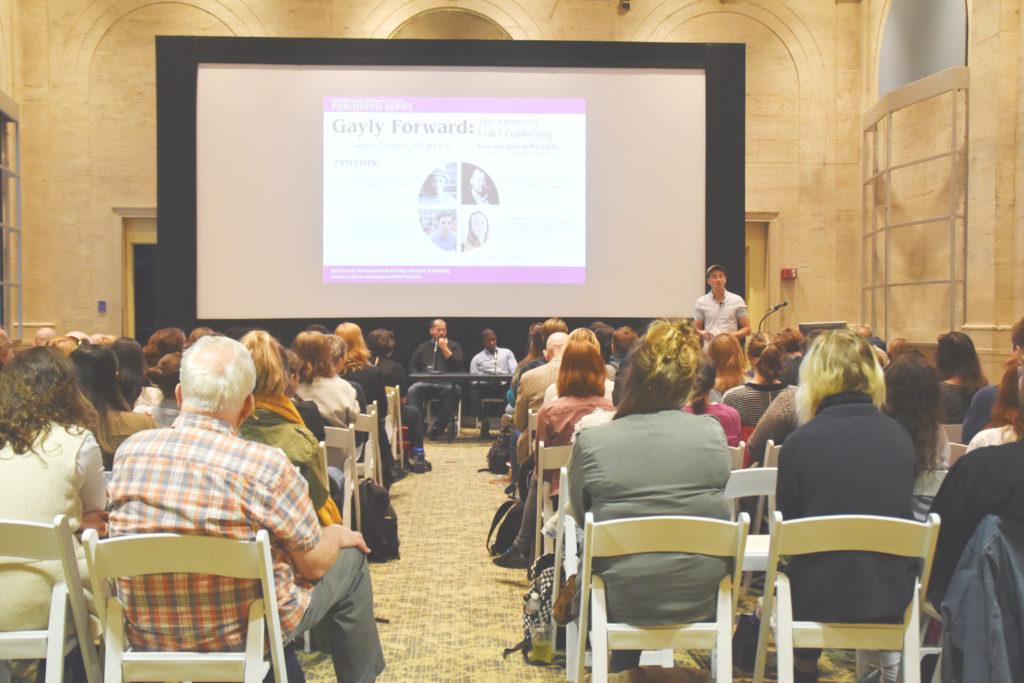 Benoit Denizet-Lewis was 21, living in San Francisco, and just figuring out his sexual orientation when he had his first tastes of queer literature at an LGBTQ bookstore. They were Jocks: True Stories of America’s Gay Male Athletes and Larry Kramer’s Faggots.

Since then, the writing, literature and publishing assistant professor has made LGBTQ diversity his calling. He’s a writer, a teacher, and, recently, a panel host. He led Gayly Forward: The Future of LGBT Publishing last Tuesday in the Bill Bordy Theater. The panel featured experts William Johnson, Alexander Chee, Stacey D’Erasmo, and Bryan Lowder.

“I wanted to gather a group of diverse writers and editors and journalists,” Denizet-Lewis said. “To talk about both what’s happening right now in terms of the stories that are being told, and what we hope will continue to happen.”

Bryan Lowder is the associate editor of Outward, the LGBTQ section of Slate Magazine. He said in an interview that he wanted to represent a journalistic perspective in a panel full of novelists.

“One of the things [the panelists talked about] is the importance of diversity in media,” Lowder said. “I think, as is the case with all kinds of media, we want to think about what voices are present in terms of race, class, education, and gender identity.”

The panel had approximately 60 in attendance. It began with Johnson, Chee, D’Erasmo, and Lowder listing off their favorite queer books, from Gordon Merrick’s novels to Simone Elkeles’s Rules of Attraction, and it slowly turned into a discussion on diversity among literary prizes.

Stacey D’Erasmo, associate professor at Fordham University and author of five books, said that when she judged the hundreds of National Book Award nominations, she noticed how few LGBTQ books were on the list.

“I was like, ‘Where are all the queer books?’” she said. “By the time you get up to jurying for major prizes, there is less and less queer content.”

She said that in the history of the National Book Award, less than five winners have ever featured queer content. But according to the American Library Association, five of the top 10 most challenged books of 2016 were disputed for LGBTQ themes.

“Where’s the press on that?” she said. “I felt that did not get as much attention as it should.”

Most of the panelists noted the difficulty of passing queer content through publishing agents, who Johnson referred to as the “gatekeepers” of the industry.

But Johnson, the program director of the LGBTQ organization Lambda Literary, is hopeful that the trend of queer themes is on the rise, especially in young adult fiction.

Social networking has also shifted the course of the industry, Johnson said. The panelists said writers can find readership online.

“I tend not to get too frustrated, because now there’s venues where if you’re good and if you’re smart—you can market yourself,” Johnson said. “You can bypass the gatekeepers and sell a book.”

Alexander Chee, a novelist and associate professor at Dartmouth College, argued that despite difficulty in marketing queer content, writers should not self-censor. Instead, he called for the inclusion of more realistic queer characters.

Lucy Randazzo, a writing, literature and publishing graduate student, said she hoped to come out of the panel with an action plan on representation in literature.

“It’s a difficult topic in trying to figure out what direction to head in order to increase diversity and a solid coverage of issues,” she said. “Everyone has a slightly different opinion on it.”

Kyle Eber, a freshman writing, literature and publishing major, said he appreciated that older members of the LGBTQ community were keeping the conversation going.

“These are role models we can look up to,” he said. “[We can say,] ‘I’m going to be like them. I’m going to continue the conversation and grow from their experiences.’”