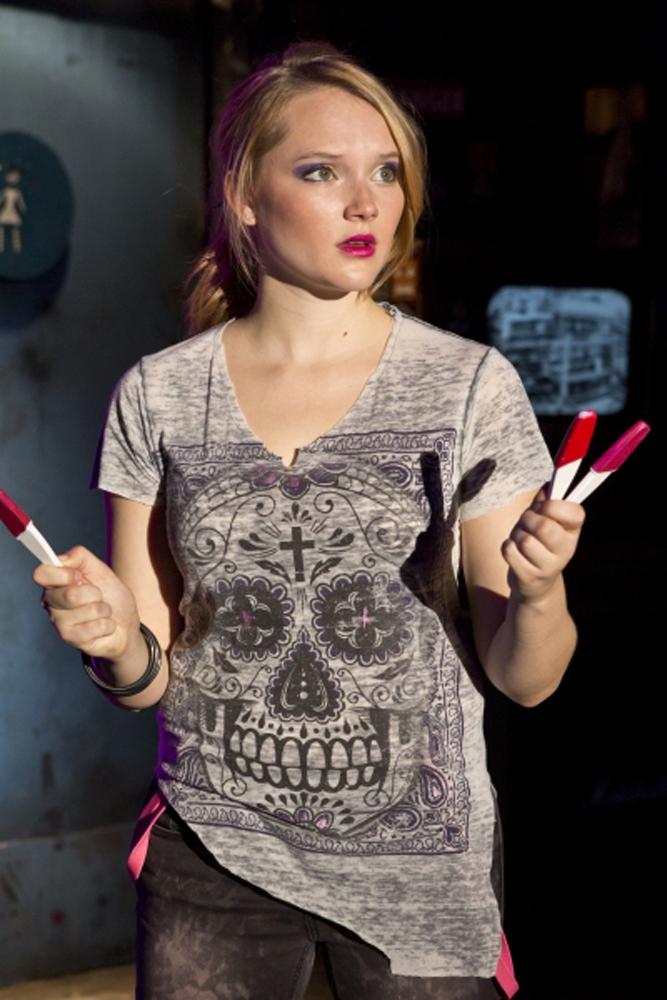 A 2013 performing arts graduate of Emerson College, Mariah MacFarlane is now on tour as part of the cast of THE Broadway hit American Idiot. The musical is based on the 2004 Green Day album of the same name. In it, MacFarlane plays Heather, one of the three leading women and romantic interest to one of the leading men.

MacFarlane had been auditioning for the gig since freshman year of college. Having the chance to join the tour last year, she declined, choosing to finish school. After graduating this past spring, MacFarlane was re-offered the job and joined the tour as it went to Asia this past fall. Currently, she and the rest of the company are touring the U.S.

The Berkeley Beacon recently got on the phone with MacFarlane to talk about American Idiot, finding success so early and advice for current performing arts students.

Berkeley Beacon: How would you characterize this experience?

Mariah MacFarlane: Very eye-opening. The life of a tour is something you don’t really know what to expect until you do one. And this tour is very aggressive with its schedule with how many cities and how many one-nighters we’re doing. You’re trying to turn out a product that’s still successful every night. It’s a tough life, but it’s fun.

BB: Were you relieved to get such a great job right out of college?

MacFarlane: Yeah. I couldn’t have planned it any better if I tried. The schedule worked out so that I joined quickly after graduating. I was ready to do the whole moving to New York thing and just start pounding the audition scene. So it worked out in a way I didn’t expect.

BB: What advice do you have for current students who are nervous about “making it”?

MacFarlane: For me alone, it took four years collectively from first audition to actually being in the show. I probably auditioned 20 times at the least. It’s the age-old saying of perseverance in this business. You have to keep going back, and back, and suck up your pride, and keep at it. You got to cut your own path.

BB: Where would you like to see your career after American Idiot?

MacFarlane: I don’t know. This show, for me, is an incredible show and very satisfying as an artist. I think it’s a really great work of art. I want to continue doing pieces like this. You can’t be too picky in this business, but I want to keep doing pieces where I feel this fulfilled and a part of something that’s really special.

BB: Now that you’re in the working world of theater, is there something you’ve picked up that you didn’t learn at Emerson?

MacFarlane: You always heard about how to do eight shows a week. But it doesn’t click in until not only are you doing eight shows a week but you have to be on the bus all day, and you’re not sleeping full nights, and you’re constantly moving. It’s a challenge I would have never understood until I got thrown into the process of it. It’s a job. You got to push and give 100 percent.

MacFarlane recently returned to Boston in early February on tour with American Idiot. The tour continues around the United States until the end of May.