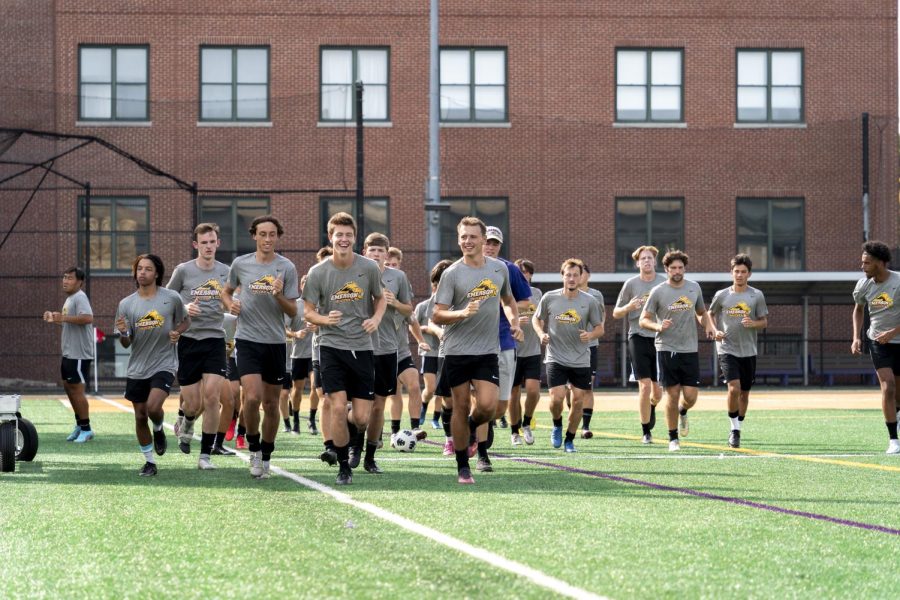 The Men's soccer team are undefeated through five games played in 2022.

Looking to rebound after a dismal 2021-22 season, the Emerson men’s soccer team seems to have found its competitive spark—going unbeaten, with two wins, in its last five games.

The team is 2-0-3 in the early stages of its fall campaign, a strong separation from its season last year, when the team only won three games while dropping 11 with two ties.

Once last season came to a close, nine players graduated from the Lions’ roster. From that point, Assistant Coach Liam McKersie said it was time to bring reinforcements.

“The focus was replenishing but also making things as competitive as possible,” said McKersie, who also serves as the team’s recruitment coordinator. “Bringing as good of a class as possible as far as talent goes and high character players to really help the team culture take the next step.”

Within the offseason, the men’s soccer team added 11 new players to its roster, bringing the total number of players to 29.

“Twenty-seven is a golden number to us,” said Head Coach Daniel Toulson. “But when we see players who are interested in joining and represent our key values, it’s also hard to say no to that. That’s why the class was a little bit bigger [than usual this year].”

Toulson, formerly an assistant coach, moved into the head coach’s position in 2020, while McKersie joined the coaching staff in 2021 after a spell coaching as a graduate student at Chatham University.

Limited in his recruitment process at Chatham by the COVID-19 pandemic, McKersie said he was excited to build upon the program once he got to Emerson.

“This is the first time I saw a full recruiting cycle,” he said. “I was really learning and making decisions on the fly with the coordinates of Coach Connelly and Coach Toulson.”

Many of the team’s new players come out of prominent national development programs, including MLS Next and the Elite Clubs National League.

It isn’t just about the skill level, but also the character of the player, said McKersie.

From coast to coast—and even from across the Atlantic, in the case of French native Hugo Berville—the Lions have brought in a class that spans far and wide.

“We really value geographical diversity within the team,” McKersie said. “It’s a way that we can separate ourselves from some other schools. We want to create a team and an identity of different backgrounds and different personalities.”

The team rotates the captain’s armband between five players, Toulson said, valuing a leadership group rather than the traditional hierarchy and allowing for more players to feel a personal connection to the team.

“They all bring different skill sets, different positions, different mentalities, and that way they reach everyone in the group in a one-on-one type of way,” Toulson said. “The feedback from a lot of the younger guys has been that they really respect our leaders and we can ultimately be successful.”

Although the team features many fresh faces to collegiate soccer, Ethan Fitzimmons joins the Lions after a year at Saint Michael’s College. The sophomore goalkeeper is from western Massachusetts and made an immediate impact on the team making 14 saves and conceding only two goals. He was also named NEWMAC Defensive Player of the Week on Sept. 6.

Directing his defenders, he uses tactics to limit the quality of shots from his opponents.

“Off the field, I’m reserved, but on the field, I’m one of the loudest,” Fitzimmons said. “I even lose my voice sometimes after the game because I was shouting so much.”

The team is still forming a solidified starting squad as players battle in practice for a spot on the pitch. Managing the rotation of the team’s large roster has been important to Toulson.

“The quality from top to bottom is really close,” Tucson said. “It’s a lot higher than in years past which means that training is really competitive.”

“Guys want to get into the starting 11, want to play minutes and they’re good players but some have just a few things that they need to button up on,” he continued. “They’re trying to solve it by working really hard in practice. A lot of guys are getting that, which has been good for team morale.”

Looking towards their season, the Lions will be looking to battle on pitch for a top position in the NEWMAC. However, it isn’t the coaches who have these goals, but the players who want to achieve a more competitive season.

“We as a staff want to be able to empower our players to make a lot of decisions,” McKersie said. “The nature of the game is so fluid on the field. We want to make it pretty player-led on and off the field when setting goals and expectations.”