Queen of the castle 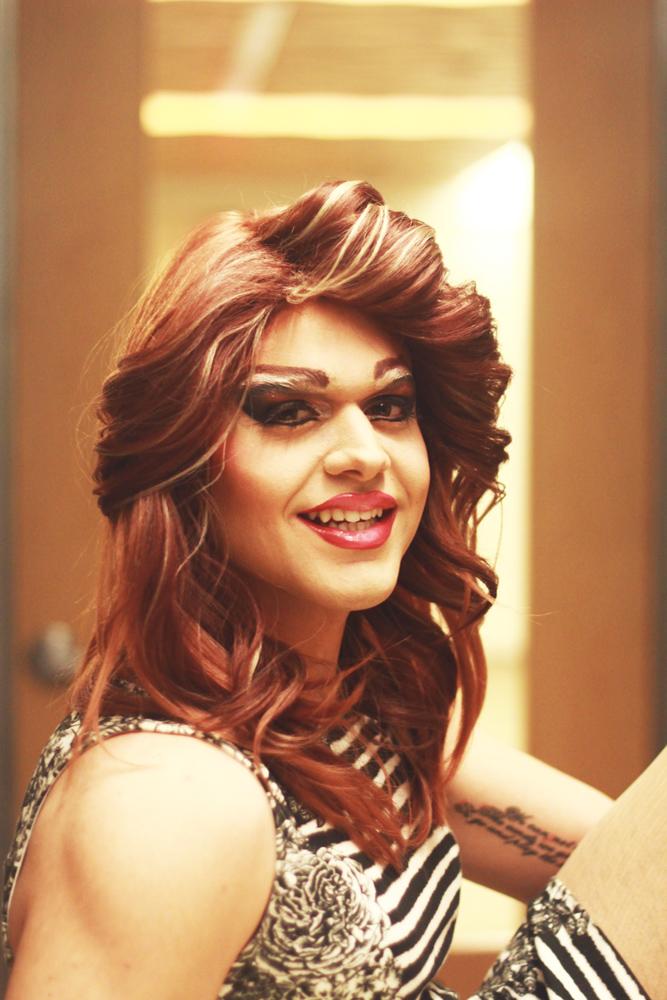 A lover of pop culture and all things Gaga, Ms. Anya B. Hynz prides herself in her variety of personas: Goddess of gaudy, Lady of luxury, Madame of madness, and Chica of charm. She dances, she dolls up, and she likes to get a little down and dirty when she performs for a crowd. She is edgy, she is sultry, and her breasts… are entirely fake. She is a drag queen, and she is the creation of Darian Carpenter.

Carpenter, a junior visual and media arts major, developed a passion for the art of drag performance at 16. He first expressed interest through creating YouTube parodies of his favorite female pop stars like Rihanna and Ke$ha, satisfying a preexisting interest in art and theater from a new, feminine angle.

“When I was little, I was usually surrounded both through family and the media by female roles and characters and liked to act like them for fun,” said Carpenter. “I would dress up like them to pass the time. I’ve always had a performer bug in me, and it was a chance to separate myself from what I was doing in life and be creative.”

After coming to college, Carpenter’s YouTube parodies evolved into drag numbers. He debuted his first drag persona, The Fame Monstre, at Emerson’s 2012 Dragtoberfest, inspired heavily by his favorite pop star, Lady Gaga. He won the competition and received a positive response from the crowd, propelling him to invest time and energy into drag as his prime hobby.

By December 2013, Carpenter sought an original name that would withstand the test of time. He emerged with his latest persona, Anya B. Hynz, in his first professional show on January 4, 2014. Bringing a support system of nearly 70 friends and family members to a club called Bobby’s Place in his hometown, Taunton, Mass., this was Carpenter’s first show where he left with money and was critiqued by experienced drag stars. Additionally, this marked the first performance of Anya B. Hynz’s “Blessed Mary Tour” which includes five other cities, including Lynn, Boston, Providence, Houston, and New York City.

Despite the launch of a tour, Carpenter admitted that he doesn’t consider performing a full-time aspiration; he sees it more as a therapy than a career.

“It’s the same thing as those people who normally use Friday nights to go out and party,” he said. “Drag is a chance for me to step away from my true reality and do things that I normally wouldn’t. It’s an excitement that I don’t get from any other piece of my life as of right now.”

In exploring the art of drag as his own Friday night entertainment, Carpenter has brought many of his friends to the shows as well, not only to watch, but also to experience being on stage with him. In his debut at Dragtoberfest, he rounded up his closest friends as his backup dancers, who he called “The Fames,” one of which was junior BFA performing arts major Tonasia Jones, a large supporter of Carpenter’s drag career.

“The best part about seeing Darian perform is that, when he does, he is in his own little world where, for a moment, nothing exists but him,” said Jones. “He has a work ethic of a queen, not stopping until everything is perfect. He is mesmerizing.”

Carpenter admitted to being a perfectionist when it comes to performing, preparing days before a show to ensure his vision becomes a reality.

“When I performed and won that first contest, I looked like a complete mess,” he said. “I had very little makeup on, no voluptuous body parts, and was doing it purely for the fun of choreography and singing. Now, I’m not comfortable wearing the same outfits more than a handful of times.”

Carpenter takes pride in selecting outfits to fit Anya’s ever-changing personality, describing her style as dependent on her mood each night.

“Sometimes she’s a real bitch and throws on her hoop earrings and thick lip liner and will make sure you show no disrespect,” he said. “Other times, though, it’s all about feeling cute and fab while rocking studs or something vintage.”

He often relies on Amazon and local thrift stores to find clothes for Anya, experimenting with conventional women’s fashion.

“I love making quirky outfits but honestly, the less clothes the better,” said Carpenter. “That’s another reason I love drag. It gives me a reason to be almost nude and it’s okay.”

As a college student, maintaining his image and his ever-present need for a wardrobe refreshment gets to be expensive, but Carpenter goes to great measures to craft Anya’s look exactly as he wants it to be.

“My mom’s always worried about how invested I’m going to be in drag, especially if I’m paying to go to Emerson for film,” he said. “When I was leaving home, she said, ‘You have to pack for two genders now, like two totally different people!’ which is true. It’s like another person to take care of.”

Performing not only puts a strain on Carpenter’s wallet, but also on his body. To fit into his costumes, he works out vigorously and focuses intensely on his diet in the week before a performance.

“I sometimes don’t eat because I’m nervous, but usually I just want to fit into a skirt that I’m wearing,” he said. “If I know I’m trying to wear something revealing then I don’t want to have a manly pot belly. That’s when I thin out and do the pop star. It’s a very pop star culture.”

To add to the prepwork, Carpenter thinks about music choices and choreography often, working hard to incorporate more than one song into numbers to tell a story. He mixes together what he refers to as his “Holy Trinity,” consisting of Lady Gaga, Marina and the Diamonds, and Nicki Minaj, with occasional bursts of Beyoncé, Lana Del Rey, and Paloma Faith. He said it’s important to mix classics with Top 40 hits to maintain relevancy and entertainment value.

“In drag, there’s something to be said about putting on a performance rather than just lip-syncing to a song,” he said. “That’s something I’m bringing to the drag world that I feel there isn’t enough of. It’s been my driving force. When I see drag, I want to see a show. I want to see more.”

Carpenter’s fellow drag queen, sophomore theater studies major Duncan Gelder, acknowledged this fire and plans to perform shows alongside Anya B. Hynz during the spring semester. The two have learned from each other since meeting at the 2012 Dragtoberfest and since, Carpenter sees him as an inspiration, collaborator, and mentor. Gelder taught Carpenter much of the drag vocabulary as well as different tricks of the trade and, in turn, has watched Carpenter grow in his drag performances since he first started in 2012.

“I think one of the most captivating things about Darian is his eagerness and passion for drag,” said Gelder. “It really shows that he’s not just going through the motions. He genuinely loves performing and you can really see it in what he does and the planning that goes into it. He always wants to try something new.”

Gelder praised Carpenter for his ability to captivate an audience through the performance aspect of Drag. He often asks himself how he can make his own shows as captivating.

“I always need to make my makeup and hair meticulously perfect to win an audience over, but he understands how to fill the stage with his presence and turn it into a full performance,” said Gelder.

Looking forward, Carpenter said his passion in life is to combine his degree in film with his strengths in performance, music, marketing, and fashion that are crucial to his drag career, thus creating a marriage of his strengths, his passion, and the fierce drive that reflects in Anya B. Hynz.

“Anya is very much just me exaggerated in a female form,” said Carpenter. “When you perform drag, it’s like this surreal moment where you’re still you, but what has come over you is a horse of a different color, really. Some mornings I wake up and I just want to be a dude, but once you’ve started, you crave it.”