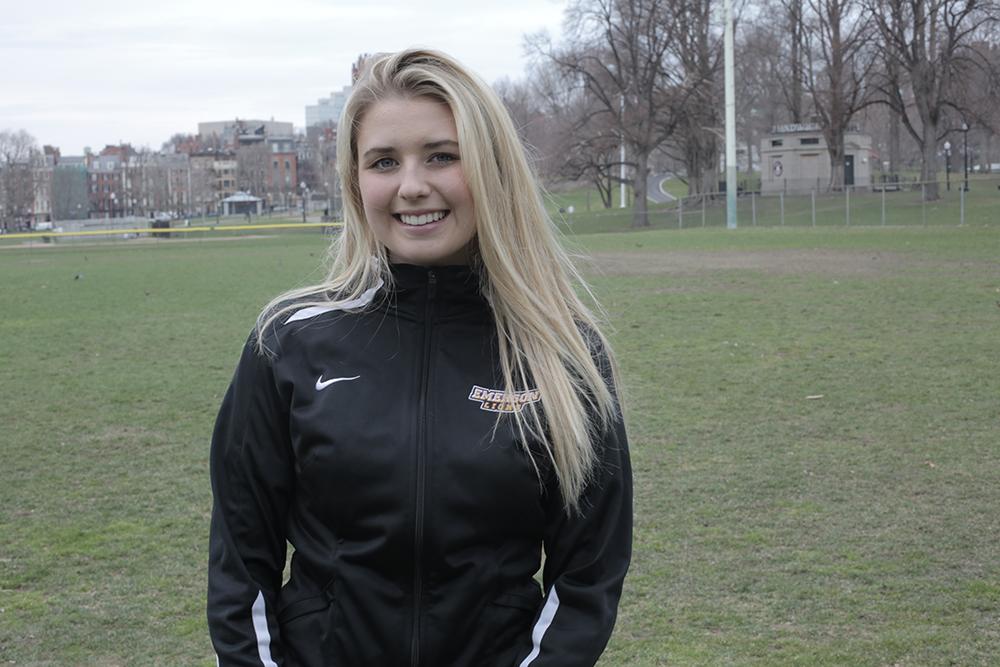 Emily Quinn knows a thing or two about a campaign.

She worked for her father in his bid for Bristol County Sheriff in Massachusetts in 2012, and she traveled to Iowa with Emerson classmates to get exposure to the nation’s 2016 presidential nominating process. Now, the freshman is waging a campaign of her own—for New England Women’s and Men’s Athletic Conference women’s lacrosse rookie of the year.

It’s early—the Lions (3-2, 0-0) have only knocked five matches off their 16-game schedule. But leading the conference in goals, not just among freshman, but among all, Quinn figures to be up there in the early exit polls. The attack was named the NEWMAC’s offensive player of the week on March 7.

Quinn didn’t post any red, white, and blue signs advocating for the title. In fact, she’s not openly campaigning for any awards at all. Her numbers are doing the talking, and she’s been humble about the early scoring, according to head coach Kat Egizi.

“She hasn’t really shown me any reason to believe she’s going to get a big head from this, or she’s going to try to take over the team or anything like that,” Egizi said. “She has remained very level-headed.”

Quinn has scored 15 goals in four games, outpacing her closest teammate, Guerin Morrisette, by seven tallies. Senior captain Victoria Kanaris, the Lions’ goalie, said Quinn’s ability to play at a high level out of the gate has been invaluable.

“It’s been great to have someone come in that’s so young, and just put her in there and she already knows what she’s doing,” Kanaris, a visual media and arts major, said. “There’s almost no learning curve for her. Of course, there’s obviously things that she needs to adjust to in the college game versus the high school game, but I think she’s very much stepped up.”

Egizi said that she rarely coached Quinn due to scheduling differences, but she was able to learn about her playing style from colleagues and through recruiting. Egizi said she was optimistic about the freshman’s ability to score goals at the outset.

“I had a pretty good picture of what she was going to be able to bring, and I knew she was someone who could put the ball in the net,” Egizi said. “I didn’t know everything about her as a player, but I did know that, and it’s serving me well now.”

While her goal-scoring prowess has been on full display, Quinn said she’s hesitant to bask in the accolades without first recognizing others.

“I go into every game with the win on my mind,” Quinn, a political communication major, said. “It’s a unit. I really won’t take credit for my goals because I’m always getting a pass from the midfield. I give them so much credit for getting the ball down the field.”

Kanaris and Egizi both cited an instance in which Quinn was face guarded in Florida as a representation of her willingness to not be the go-to scorer on a night when it isn’t in the cards.

“Even when she’s not scoring, she knows how to get other people open, or bring away defenders,” Kanaris said. “She knows when to step down when she has to but also can easily step up, which I think is something really good about a player, especially a young one, to be able to recognize their role and how they can help the team.”

While Quinn’s previous connection to Egizi would appear, on the surface, to have been her obvious motivation for choosing to attend Emerson, it wasn’t quite that simple. Her father John was a state representative in Massachusetts for over a decade before running for sheriff. Quinn’s work on his behalf in 2012 fostered a fondness for politics that drew her to the college’s political communication major.

“Phone banking for my dad and going door to door was awesome, and just getting experience, meeting people, and being a part of it was definitely what made me want to major in it,” Quinn said. “I kind of grew up with it.”

Quinn attended the Iowa caucuses in February as part of Emerson’s brigade of participating students and said she had the opportunity to meet a collection of presidential contenders.

“I got to get a feel of what it was like to be a part of the political process, and see people in rallies, see how the audience reacted, and also see how the candidates portrayed themselves, which was awesome,” Quinn said.

On the field, the Lions’ season continues tonight at 6 p.m. with a trip to Wentworth Institute of Technology. Quinn said she’s focused on treating the rest of the year as an opportunity to improve and build on her strong early impression.

“I always like to think that there’s someone stronger, faster, and better than you are,” Quinn said. “That’s what motivates me everyday to better my game.”

Egizi said with Quinn’s propensity to score already established, the season’s final month will serve as an opportunity for the freshman to broaden her skill set

“We’re just trying to help her become a more dynamic player and a more multi-dimensional player,” Egizi said. “We want to make her more dynamic when she has the ball to be able to feed from behind. If she can get to the point where she has a good eye for cutters in the middle and can feed and start to rack up more assists, I think it’s going to make her very dangerous.”