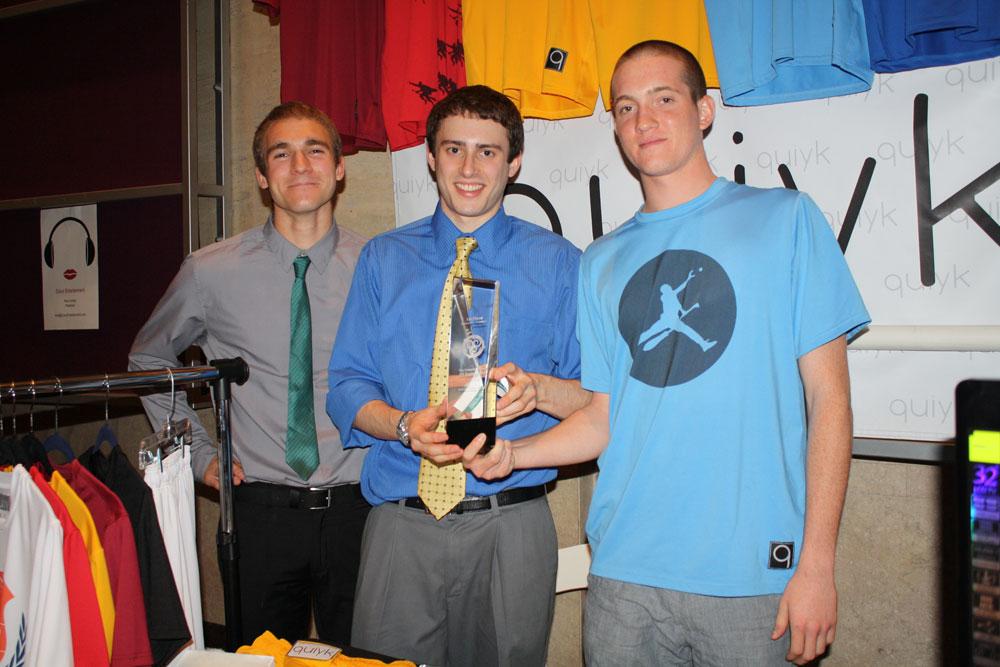 Following the sale of over two-thirds of their inventory November at the Quidditch World Cup, Quiyk Athletic Apparel founders Matt Lowe and Eric Wahl knew it was time to expand.

Over the past six months, the two juniors reinvested their profits in a second round of merchandise, launched online sales, expanded the size of their team, partnered with the International Quidditch Association, and most recently, won Emerson’s seventh annual E3 Expo — the college’s capstone event from the Emerson Experience in Entrepreneurship course.

The E3 Expo showcased 13 student companies this year, distributing a total of $20,000 in cash and prizes from the college and various sponsors such as New Leaf Legal, according to Emerson’s website. Lowe, who presented the company along with Director of New Business Nadav Swarttz, said the team was awarded a total of $9,000, with $5,000 in discretionary funding, $2,000 for legal services, and $2,000 for public relations.

The idea for the company, which was started two years ago, sprouted after Wahl and Lowe — who are both Quidditch players — noticed participants often wore jeans and t-shirts while playing. Wahl said the duo discussed doing something to standardize Quidditch apparel, which led to the creation of Quiyk.

“Sophomore year was a lot of trial-and-error and prototypes that didn’t really go anywhere,” said Lowe, a junior visual and media arts major.

Although Quiyk was slow to start, Wahl, who works as production director, said an investment from a family friend last summer helped the company get on its feet, but declined to disclose the sum of the start-up capital.

“It was the best situation possible; it was an interest-free loan with no timetable for payback or strings attached,” said Wahl.

With the new funding, Lowe said the duo went into manufacturing overdrive prior to their launch at the fifth annual Quidditch World Cup in New York in November.

“We sold about 900 pieces in two days, and saw [Quiyk] was a viable thing,” said Lowe. “We pretty much made back our entire initial investment.”

Lowe said following the success at the World Cup, the company formed a distribution partnership with the International Quidditch Association and is currently manufacturing new products for the organization, which they hope to debut in July.

“Whenever a representative is at a tournament, our stuff is being sold,” said Lowe. “We’re hoping to cement ourselves in the Quidditch community, it will be big to see ourselves on a global stage.”

“Everyone starts with something, whether it was Nike with track, or Under Armour with football,” said the marketing communication major. “We feel like we’ve entered a niche market in Quidditch, and itw’s an opportunity to build off of and expand on.”

Wahl said he, Lowe, and Swarttz plan to have a meeting following final exams, where they will roadmap summer and future plans. Lowe said in an effort to streamline the production process, the team is planning to move all manufacturing to Los Angeles, where he will be attending Emerson’s Los Angeles summer program.

“We’re really thankful for everyone in E3,” said Swarttz, a junior marketing communication major and entrepreneurial studies minor. “We’re pretty proud of the company, because all of the startups were awesome, so it was quite the accomplishment.”