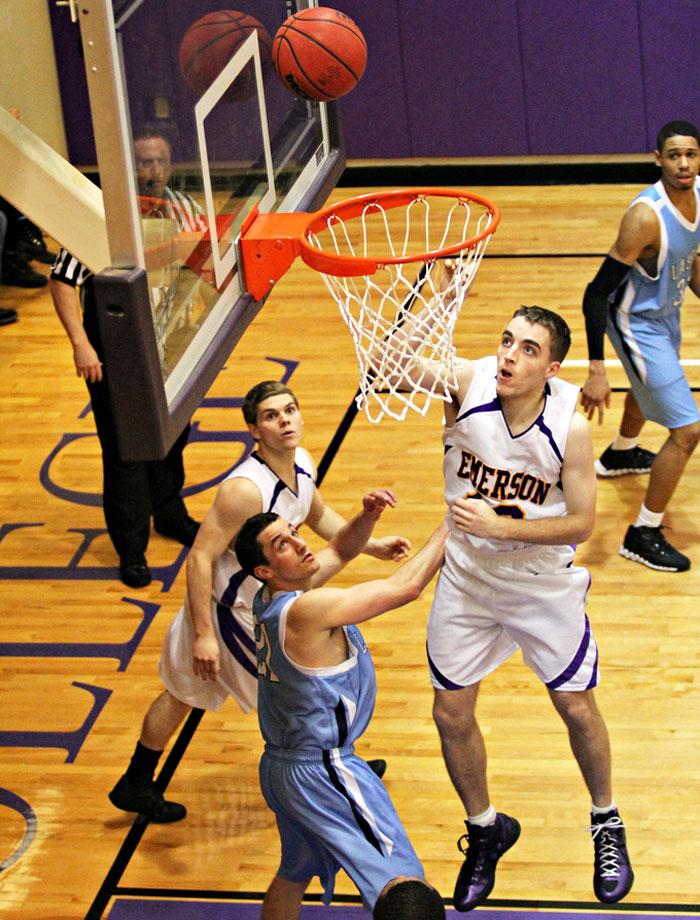 Going into halftime trailing the visiting Lasell Lasers 51-30, the Emerson men’s basketball players had their work cut out for them.

“We could not guard them even a little bit,” said head coach Jim O’Brien. “It’s the first time I’ve ever been in a game where a team shot 70 percent in a half. They basically did whatever they wanted in the first half. I challenged [the team] to play with a little bit of pride.”

The Lasers were dominating on all levels offensively. Sean Bertanza had already scored 20 points and was 3-4 from beyond the arc, and Javon Williams was a perfect 6-6 in the paint.

Emerson senior guard Drew Venter said that his team was motivated to give the fans a better showing.

“We [were] being embarrassed at home, in front of a great crowd, a great turnout,” Venter said.

Though Emerson ultimately lost, the Lions came out of the locker room a new team. Emerson made a game of it, as the final score stood at 75-66.

Right from the get-go, Emerson went on a 9-2 run. When junior guard Bilali Kalilou-Mack made a jump-shot to cut the lead to 14, Lasell called its first timeout and the long-silent home crowd erupted into cheers.

Emerson shored up its defense in the second half, forcing Williams to earn his points from the stripe and holding Bertanza to just one field goal on eight shots. Sophomore transfer Nick Welch also contributed, scoring seven off the bench and adding five rebounds. Freshman Patrick Lowndes and senior Nathan Firn got into a rhythm —Firn made efficient jump shots and Lowndes used the glass to put in acrobatic layups.

The Lasers remained composed, however, and continued to play relentless defense. They forced Emerson players in the corners with double teams and defended every inbound pass. Whenever the Lions attempted to score on a breakaway, Lasell responded with timely blocks, led by Earnest McNeil with three off the bench.

“We got trapped really easily,” said freshman point guard Eli Kell-Abrams. “If we’re not going to take care of the ball, we’re going to shoot ourselves in the foot.”

Excessive fouls were also a factor in Emerson’s struggles. Both teams went into the bonus barely half-way through the second half.

“Personally, I was in foul trouble, and I didn’t have a good game at all,” Venter said. The starter was limited to 15 minutes of playing time. “We’re a very physical team by nature, but we’re struggling to find the balance.”

In a recent narrow loss to Albertus Magnus, the Lions sent their opponent to the line 35 times. Emerson had 20 fouls against the Lasers.

During the winter break, the Lions dropped several close games to conference foes, including an overtime loss on the road against Johnson and Wales.

“We are what the [Los Angeles] Clippers used to be before Blake Griffin,” the senior said, referring to the long-suffering franchise. “They had a lot of close games when they were losing for years. But almost doesn’t cut it. We’re not out of the playoffs yet: We just need to find something that sparks us in the right way.”

Salt was added to the wound when Firn left the game in the middle of the second half with an apparent ankle injury. The forward did not return to the court and could be seen limping out of the locker room afterwards.

“It’s not pleasant for us when Nate’s not in the mix,” O’Brien said. “We really need him.” The coach also stated that he did not know the status of Firn’s ankle at the time. Firn leads the team in scoring this season with 16 points per game.

The Lions will try to end their eight-game losing streak tonight at home against the Mount Ida Mustangs.