Rams run away in second half, beat Lions 5-2 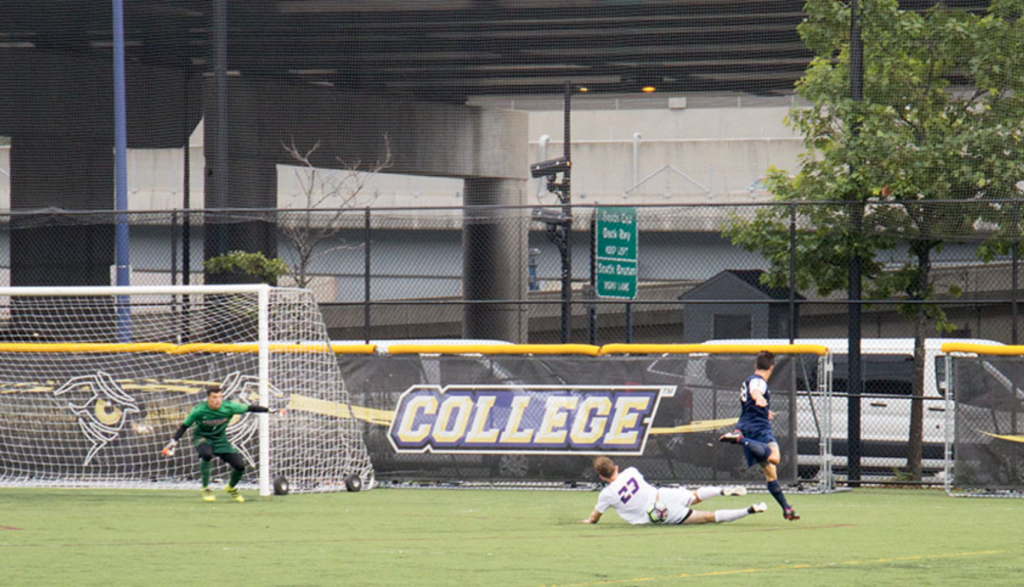 Twice the Suffolk goalkeeper went down and twice Emerson’s men’s soccer team capitalized, but the Lions were unable to overcome a Christian Restrepo hat trick in a 5-2 loss to the Rams Wednesday night.

Emerson tallied both of its goals in similar fashion—Suffolk goalie Kyle Van Cleef watched from the turf, seemingly hurt, as sophomores Gavin Faucette and JW Clark scored. He remained in the game after the scores, however.

The Faucette score created some controversy, with the Rams sideline arguing that it should have been disallowed with Van Cleef injured. But the officials didn’t budge, giving Faucette his team-leading second goal of the year.

The teams were knotted at one after the first half, which featured a goal from Suffolk’s Felipe Ucros at 28:35 and the Faucette score at 29:59. Emerson sophomore Parker Hughes made two diving plays in front of the Lions’ goal on defense to keep the score tied heading into the half.

Suffolk (2-1-0) then scored four times in the second half, largely thanks to a three-goal performance from sophomore Restrepo. Restrepo’s first goal came on a rebound with a number of Suffolk players converging on the net.

Clark scored the equalizer at 49:28, less than three minutes after Restrepo gave the Rams the lead. He said Paul Bou Aziz’s play on the attack helped set up the goal.

“We sent Paul up, and he’s our target on most of the free kicks,” Clark said. “He was able to get up, kind of flick the ball away from the keeper, and it just dropped to my foot, so I was able to put it in.”

Restrepo scored what turned out to be the decisive goal at 58:00 on a rebound in front of the net. First-year head coach Bryan Harkin said the Lions have talked about preventing second and third chances for opponents.

“First and foremost, we have to stop the delivery in the box—stop it at the source,” Harkin said. “But then, also being available for rebounds.”

Harkin said some of what he’s taught in early practices showed on the field on the attack. The Lions collected 15 shots and seven on goal, giving them an average of over seven shots on goal through three games. Last season, the team finished with just 4.38 shots on goal per game.

“Those are things we’ve talked about—[how] can we generate chances from good defensive positions, good press,” Harkin said. “That’s how the first goal comes, and the second goal is a broken play but it’s a good delivery, and it gives us a good opportunity to score.”

It was the first meeting between the Boston Common rivals since 2015, when Emerson won 3-2 on the strength of a Dan Knight game-winning goal in overtime.