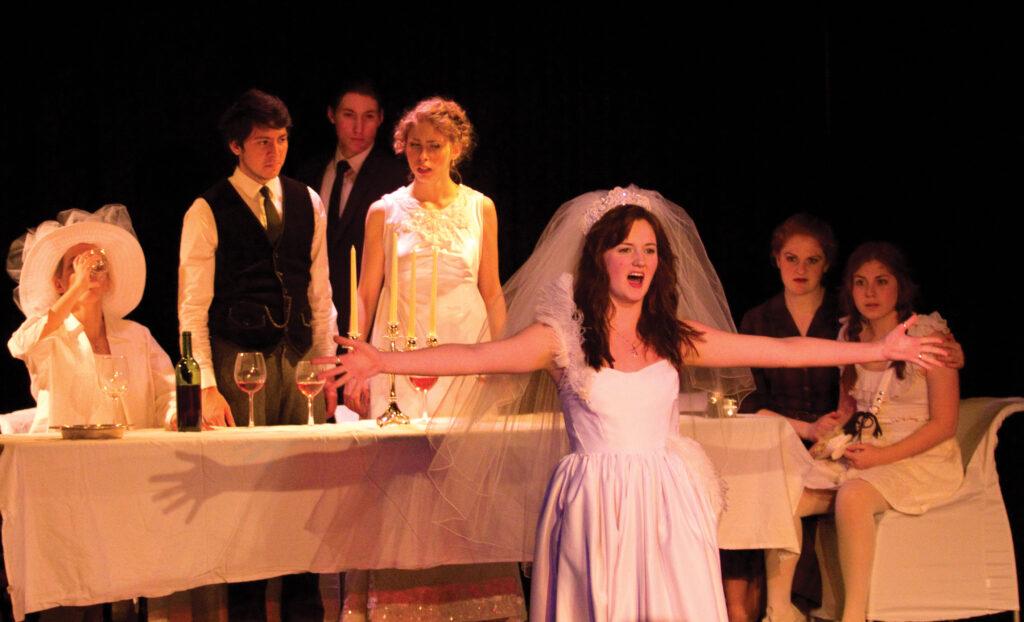 While the rest of Boston was getting in touch with their Irish side with gratuitous green and Guinness on St. Patrick’s Day, Rareworks Theatre Company chose to reveal a darker side of the Emerald Isle.

Lovers (Part One) and By the Bog of Cats, which ran March 17 and 18 in the Little Building Cabaret, provide devastating tragedies of young love and betrayal.

Despite the Irish setting in the plays, the choice to perform the shows on St. Patrick’s Day weekend was purely coincidental, said Holly Griffith, the senior writing, literature, and publishing major who directed Bog of Cats. The double bill came about after Griffith proposed Bog to Rareworks.

“I first read the play as a freshman in my World Drama class,” she said. “It’s a really rich play and I love it.”

Each play touches on themes of loss, love, and death. Annie Finnerty, who stars in Bog of Cats, said that the two plays worked perfectly together as a double bill.

“Both plays deal with ownership, how ownership affects people,” said the senior performing arts major. “Putting them together was brilliant.”

Narrators on stage left and right, played by freshmen performing arts majors Paul McGlew and Sarah Metcalf, add a darkness to the events unfolding on the hill. Their intermittent interjections gradually reveal that Mag and Joe go missing after they leave their study session.

With no scene changes, an uninspiring set, and little action outside the two characters’ hour-long dialogue, the play risked dragging on. However, Voke and Anderson kept the audience absorbed with their portrayal of the characters’ believably dynamic relationship.

As Mag prattles on with her tragically naïve optimism about her future with Joe, he stubbornly and silently continues to study. The relentless chatter eventually grates Joe’s nerves, resulting in a climactic confrontation in which he yells that she tricked him into marrying her. After Joe’s eruption silences Mag, he fills her role, picking up her idle chatter for the second half of the play.

At the end of the play, as Mag and Joe run away excitedly to “begin their futures,” the audience is left to make their own conclusions of what exactly happens to the young couple.

In Bog of Cats, fragmented family dynamics are spotlighted in an ominous and mythical production. The show follows the struggle of Hester Swane (Finnerty) to hold onto her home and her daughter, Josie (Lea Ostner). The father of her child, Carthage Kilbride (sophomore performing arts major Cesar Munoz), will soon marry a local landowner’s daughter (senior performing arts major Lena Raff) and plans to live in Hester’s home. She refuses to leave — Hester is convinced her mother, who abandoned her, will some day return to the nearby bog.

Dim lighting and mythical allusions created a more ominous tone than that of Lovers. But exaggerated characters like the Catwoman (Voke), a witch-like oracle that patrols the bog, balance the menacing air with comic relief.

As a writing, literature, and publishing major who had never directed before, Griffith reverted back to Bog of Cat’s literary elements to guide her approach.

“Holly knew so much about the play and the literature,” said Finnerty. “She made the entire production a creative process.”

Although the performances were powerful, some wavering attempts at accents occasionally detracted from the overall effect. Bog of Cats’ large cast made this more apparent than it was in Lovers, as the varying strength and consistency of Irish brogues became obvious as the actors interacted.

Though these inconsistencies could be distracting, the double bill’s mood won out. By the Bog of Cats and Lovers (Part One) offered a captivating experience that left the audience feeling shocked and slightly unsettled.