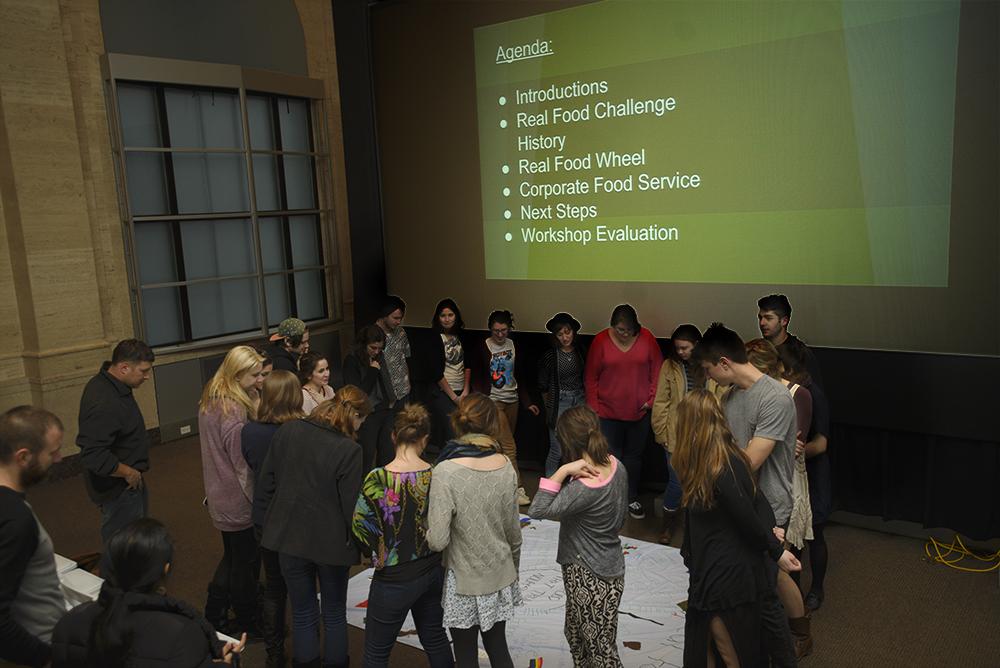 On March 25, a group of students and professors hosted a kickoff event for the Real Food Challenge in the Bill Bordy Theater, a national program that aims to integrate healthier food into college menus.

Emerson’s chapter hopes to get President M. Lee Pelton to sign a pledge to replace 20 percent of its food selections with what the chapter terms “real food,” which its website defines as food that is “local/community-based, fair, ecologically sound and humane.” Eric Van Vlandren, the college’s sustainability coordinator, said this campaign would specifically target fried and frozen items.

The pledge has not yet been presented to Pelton.

Senior writing, literature, and publishing major Tania Rios, who first submitted the proposal to bring the Real Food Challenge to Emerson, said the challenge calls for better transparency about nutritional information and more opportunities for students to lobby their school for healthier food options.

According to the Real Food Challenge website, the program “leverages the power of youth and universities to create a healthy, fair and green food system.” It encourages schools to enroll in this nationwide initiative through student-faculty collaborations.

Rios adopted the challenge as part of a semesterlong project in her Energy and Sustainability course taught by Jon Honea, an assistant liberal arts professor. After contacting the national branch of Real Food Challenge and gaining Honea’s approval, she enlisted the help of Earth Emerson, the student advocacy group, and Van Vlandren.

The launch event on March 25 was aimed primarily at student recruitment, and was the first attempt to expose the project to the entire student body, according to Rios.

“Our first and foremost goal is creating a team of active and impassioned students who are committed to seeing this thing through,” Rios said.

Other students in Honea’s class have joined the effort to implement the Real Food Challenge at Emerson, including freshman Nora Wilby.

“We learned that food is generally healthier when it’s delivered locally,” she said. “It is more fresh and also cuts down on carbon emissions generated from transporting food.”

Although most local produce is only in season for a few months at a time, Van Vlandren said local sourcing for food will provide more benefits than it does impediments.

“Just by the fact that you’re buying things locally, you’re going to be a long way down the road towards fair and ecologically principled,” said Van Vlandren.

Sodexo, the company that provides the food for Emerson’s dining facilities, does not publicly publish the cost and quality measurements of the food it serves, according to Rios. Sodexo only releases the information upon request.

Van Vlandren said that he recognized some students were concerned that purchasing higher-quality food would result in higher costs for the school and, ultimately, for students, but said this transition doesn’t have to be costly. Van Vlandren said replacing certain items would be analyzed on a case-by-case basis, and that the school could likely find similarly priced but superior items.

Though nothing has been discussed officially, Van Vlandren said potential changes could be implemented in the Little Building dining hall first, and then spread to the other on-campus eateries.