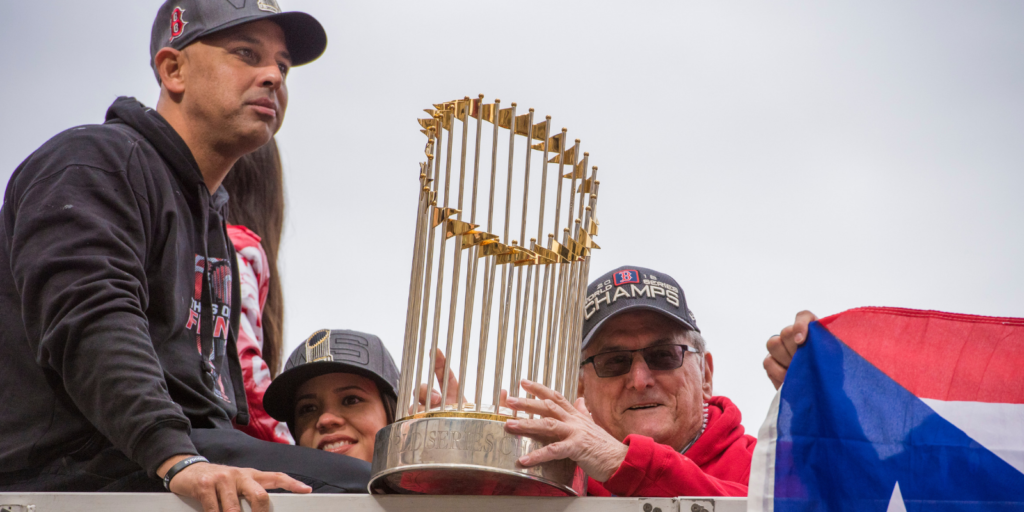 By Ziqi Wang and Yiwen Yu

Thousands of people sporting Red Sox caps and jerseys packed the sidewalk in front of campus buildings. Dining Center workers stood on chairs to wait for the champions’ arrival. Construction workers at the Little Building stood on the edge of each floor looking down at the crowded street. People chanted “U.S.A! U.S.A!” as duck boats passed the street and red, white, and blue confetti rained from the sky.

“This is the 11th parade we had since 2011,” Schiazza said in an interview. “Nothing that wouldn’t happen during other times ever happened during the parades.”

Some Emerson students and Red Sox fans began to gather outside the school buildings around 10 a.m.—hours before the parade reached campus.

Sophomore Declan Berkeley stood outside with his camera taking videos of the parade. As a Red Sox fan from Massachusetts, he said he had faith the team would pull through and win the World Series.

“We’ve got great men throughout this season, and I knew they were gonna take [the World Series] home,” Berkeley said. “I’m so proud of them.”

Sophomore and native Chicagoan Rhegan Graham said she wanted to join in on the celebration although she roots for the Chicago Cubs.

“I admit it—I’m not a huge Red Sox fan, but I’m really excited to be able to partake in the festivities,” Graham said. “All my classes are canceled, so I get to catch up on studying for midterms, which is nice.”

Chair of Communication Studies Gregory Payne still came to work despite his canceled classes. Payne said his department served hot dogs for the Red Sox Celebration Grill on the second floor of the Walker Building.

“You know, sports unites people when politics and culture and religions sometimes [are] not the best,” Payne said. “In today’s world, especially in such divisive times, baseball allows us, regardless of politics, to come together.”

Students, faculty members, and their families gathered on almost every floor of Emerson buildings facing the street to watch the parade.

Senior Lecturer Keri Thompson watched the parade from Walker Room 231. She considers herself a Boston sports fan and lifelong Red Sox fan. She said she felt ecstatic when the Red Sox won the World Series.

“This year is also special because the team relied on teamwork to win. Everyone did their job,” Thompson said.

Thompson said her love for the Red Sox runs in her blood and goes back many generations. She said this World Series victory came not long after the last—the Red Sox won the 2013 World Series against the St. Louis Cardinals.

“I felt spoiled to have a team winning so many championships,” she said.