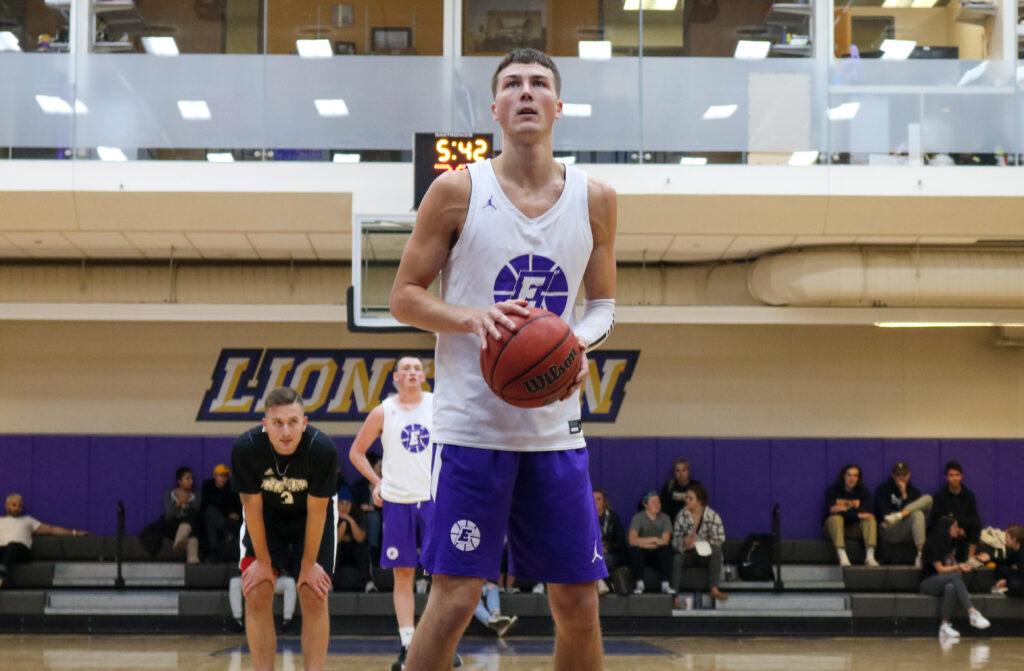 The men’s basketball team lost to Regis College 87-81 in its season-opening scrimmage, despite the 23 points from sophomore guard Nate Martin.

Both teams went back-and-forth in a high-scoring first half. The Lions trailed 37-38 going into the break behind Martin’s 19 points. The defensive effort in the half disappointed senior guard Jack O’Connor.

“We’re preaching a defensive mentality, but we have not adopted it yet,” O’Connor said in a post-game interview. “Our main focus this preseason has been defense, and we’re still working on executing.”

The Lions found themselves in foul trouble for most of the second half. Six Lions committed three or more fouls, and Martin fouled out late in the game.

“We gave up a ton of free throws,” head coach Bill Curley said in a post-game interview. “So we got to cut down silly fouls, and we got to rebound. Otherwise, we did some good things, but it’s just too many fouls.”

Curley said the team is focused on improving its defense by testing different styles of play. This included double-teaming while defending pick-and-rolls.

“We spent a lot of time just trapping because that takes a lot of effort,” Curley said. “Guys have to talk and communicate, and not just the two guys involved in it. The rest of the team has to understand where the rotations are coming from.”

In order to get better on the defensive end of the floor, O’Connor said the Lions need to improve their mentality.

“We take a lot of things for granted, and it shows when we play defense,” O’Connor said.“I think defensively, it’s not like Xs and Os. It’s really just a mentality going into games.”

O’Connor scored 17 points in the game and recorded three steals.

Coming off of an injury last season, sophomore point guard Chad DiCenzo scored 11 points to go along with six assists and two rebounds.

Curley said the team is treating tonight as a learning experience.

“I thought it was really good for us to go against somebody different and let our guys see that, if you’re not going to pay attention to the details, we’re going to get burned,” Curley said. “The devil is in the details, and that’s what we have to have to pay more attention to.”

The Lions play their first regular season game of the year against Worcester State University on Saturday, Nov. 9 at 6 p.m.

Aaron J. Miller and Andrew Lin contributed the statistics to this article.