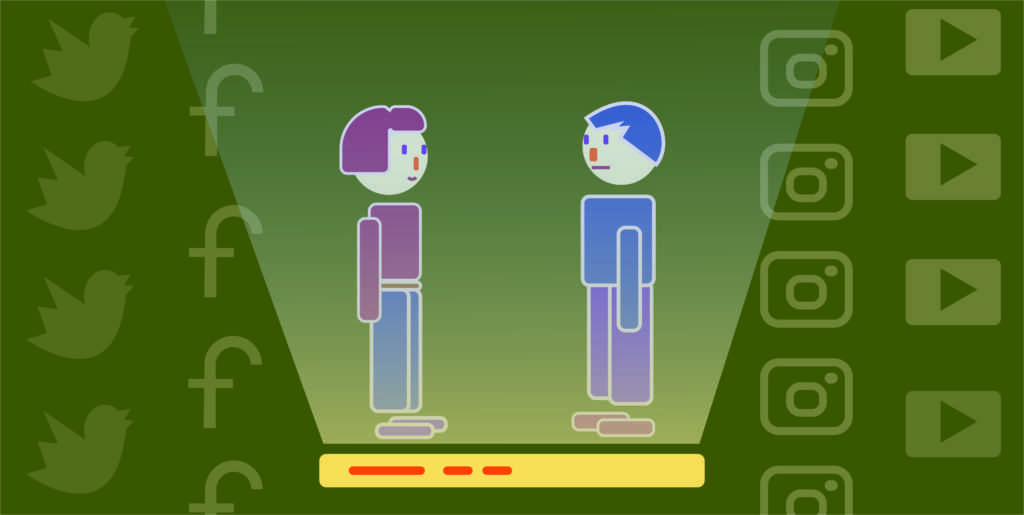 "Meeting people online brings with it a whole new world of anxiety-inducing expectations I do not enjoy." / Illustration by Ally Rzesa

In an age where technology cannot be avoided and social anxiety is at an all-time high, the once-taboo idea of forming relationships with people online whom you’ve never met suddenly became normal.

Not only are people meeting others via the internet by their own volition, but it is increasingly encouraged. Students today hear, “Get on your college’s Facebook page,” “Join the Emerson Mafia,” or “Connect with people over Instagram.” Teens are thrust online to find friendships, throwing the old, aversion-to-strangers warning out the window.

I have always been relatively opposed to the idea of meeting people online—not for safety reasons, but because meeting people online brings with it a whole new world of anxiety-inducing expectations I do not enjoy. Some people might get a kick out of the few moments that prelude the first meeting with someone they have been talking to online, but I am not one of them.

I rather relish the joys of getting to know someone over time and acquiring a natural closeness by way of dorm conversations at 1 a.m., or over a cup of afternoon coffee at the Thinking Cup. However old-fashioned my predispositions may be, an undeniable fact of candid moments like these is that they are void of expectation.

Sherry Turkle, a professor of the Social Studies of Science and Technology at the Massachusetts Institute of Technology, gave a Ted talk in 2012 titled “Connected, but alone?”

She discussed the richness of human relationships and how we “clean them up” with technology. Turkle claims immediate connection online sets people up to be isolated in reality. With solitude seldom presenting itself, we are no longer afforded a space to be separate and can no longer afford the opportunity to reach out and “form real attachments.” Instead we use other people “to support our fragile sense of self,” and consequently fail to form meaningful relationships with people.

“It’s when we stumble or hesitate or lose our words that we reveal ourselves to each other,” Turkle said during the Ted talk. “And are therefore able to form real relationships.”

Nevertheless, come spring of my senior year of high school, I made the decision to join the Emerson Accepted Students Facebook page, among others, to help with the decision of choosing a college. I was hoping to better understand the vibe of the schools I was considering and the personalities of those who may be attending. If I met people along the way, so be it.

I made my introductory post, stating the kinds of things I liked to do and the type of music I listened to, and subsequently made my way through pages and pages of posts and comments from other students. I made no comments and only liked posts I shared commonalities with. By the end, I had successfully gotten an impression of the schools I was considering.

Much to my surprise, people, especially those on the Emerson page, were incredibly receptive. I was impressed by peoples’ willingness to put themselves out there. I ended up connecting with one girl who I really liked. We were both only children with single moms who loved Wes Anderson, Rex Orange County, and pizza. We had many things in common, and a few differences that allowed us to get along in a great way. We facetimed once in March which only solidified our affinity for one another, and then decided to be each other’s roommates.

Needless to say, this was not the route I envisioned myself taking just a few months before. I was set on the idea of being randomly assigned a roommate, so as to avoid the aforementioned expectations and anxiety that come with selecting a roommate beforehand. Nevertheless, I really liked this girl and believed we would be excellent roommates. Why not try to circumvent the intolerable nervousness one feels in the weeks or months leading up to meeting your roommate?

However, due to complications with her enrollment, we did not end up rooming together this fall semester. I found myself without a roommate and defaulting to my previous plan: random assignment. Although I was disappointed to not be rooming with a girl I got along so well with, I felt a flood of relief coming over me, which was quickly followed by a twinge of guilt. I was finally free of the mountain of pressure I felt to be this girl’s best friend and the perfect roommate. Most people dreamed of finding a person online and connecting the way we did. I had that, and actually lost it. I should have been devastated, heartbroken, ranting about it to my mom and friends. But I just wasn’t.

I started to realize the reason behind my lack of disappointment was the very nature of our friendship. It had its roots in a virtual space, and solely existed there. Without any ties in the real world, how was I going to allow myself to invest my emotional stock into our situation? It simply never felt real. So when I received the message from her that we actually could not room together, I was not nearly affected as I would be if our friendship had been rooted in reality.

My roommate now is a testament to that idea. After we received our housing assignment, we briefly chatted over Instagram, but come move-in day, we were virtually strangers. Over the course of our time here, exploring Boston, chatting candidly over dinners, and going to the movies with our other friends, we have grown so much closer, and doing so has proved to be an incredibly fun and valuable experience.

Of course, some virtual friendships do blossom into beautiful, physical friendships, and that is one of the many wonders of the technological world we are now living in. I have since met up with the girl I connected with online, and I adore her. But even so, I stand by my preference for the relationships I manifest in the real world versus the virtual world.