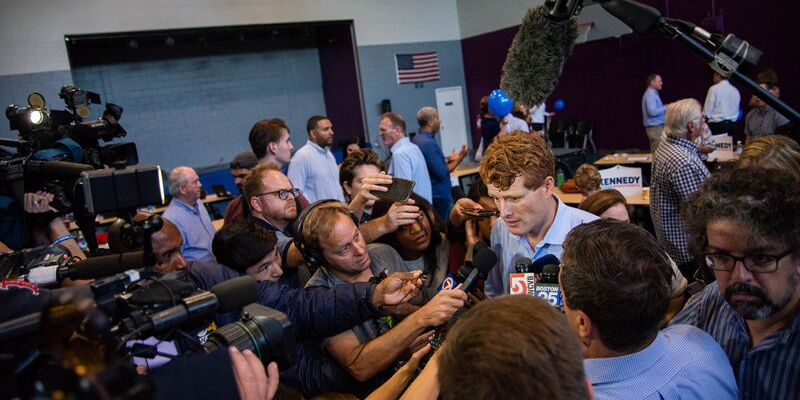 “I’m running for the United States Senate because our country is at a moment of truth,” the 38-year-old representative said. “Donald Trump has forced a long-overdue reckoning in America, and how we respond will say everything about who we are.”

“I’ve spent my career fighting for the folks who have been shut out, let down and left behind,” he said in his speech. “I’m running for the Senate to help build a system that won’t fail them any longer.”

He distinguished himself from Markey, a 73-year-old progressive, by pushing to get money out of politics, planning to abolish the electoral college, and installing term limits for Supreme Court justices.

“Yes, there are going to be areas where we overlap, and he’s been a strong leader on climate, but I would put my climate record up against anyone’s,” he said to members of the press after his short speech.

In his speech, Kennedy did not mention Markey, who has served in Congress since 1976 and as a Massachusetts Senator since 2013. The incumbent did challenge Kennedy and his other primary opponents to a debate on climate change in November in a video released on Twitter Saturday morning.

Although Kennedy is 35 years younger, he insisted that it wouldn’t be a talking point in his campaign, pointing to his support of presidential candidate Elizabeth Warren, and Speaker of the House of Representatives Nancy Pelosi.

“This is not about age, this is about vision, leadership, and energy that needs to be engaged to fix the issues that have divided our country so deeply,” Kennedy said.

The Brighton native comes from a long line of political leaders, stemming from his great-uncle, John F. Kennedy, who served as the 35th President of the United States until his assassination in November 1963.

Kennedy plans to tour around Massachusetts for the next three days, stopping in Boston, Salem, and Worcester among other cities.

A poll conducted by Suffolk University and the Boston Globe found that Kennedy currently holds a nine-point edge over the rest of the five-candidate field among likely Democratic primary voters.

The poll also found that in a head-to-head matchup between Kennedy and Markey, the 38-year-old congressman leads Markey 42 to 28, a 14 point gap.

None of the other three candidates in the race polled above one percent, as 36 percent of voters still remain undecided.

Even though Kennedy currently holds a sizable lead in the race, Markey has been previously endorsed by multiple high-profile Democrats, including Congresswoman Alexandria Ocasio-Cortez, whom he worked with to push the Green New Deal, and presidential candidate Elizabeth Warren, his senate colleague.