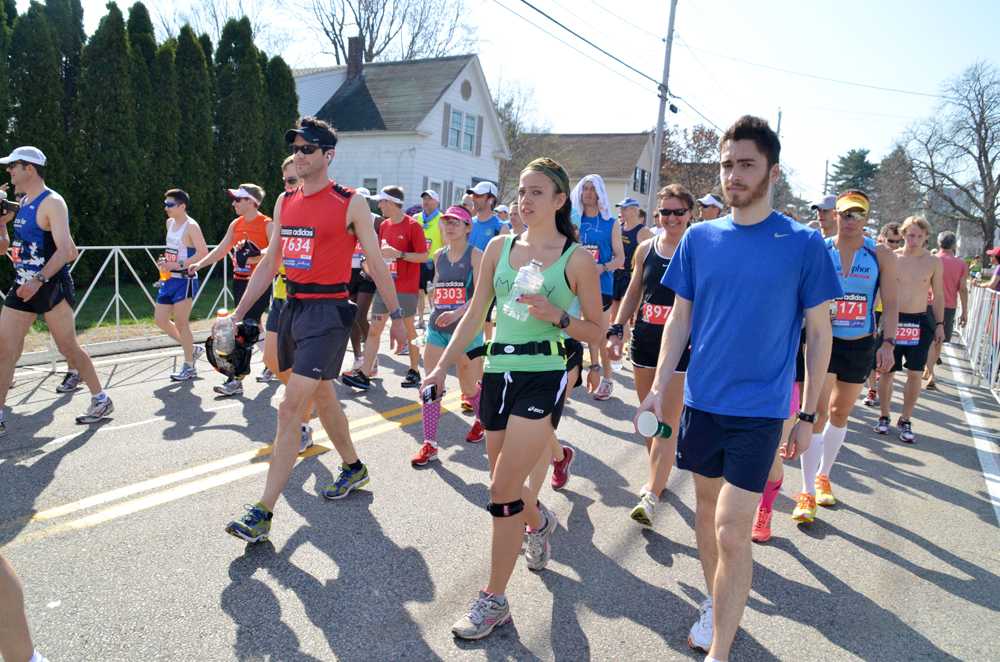 HOPKINTON — After hours of waiting, Andrew Gryzwacz finally arrived at the starting line. With sweat trickling down his face — the temperature a record high 89 degrees — he found his place at the front of the pack of runners set to embark on a 26.2 mile journey.

Gryzwacz was one of six Emerson students and thousands of others who ran the entire Boston Marathon as a bandit, a term used to refer to a person who runs a race without having paid the registration fee.

Unregistered runners are pulled from the course on race day if they are seen, said Marc Davis, the communications director of the Boston Athletic Association. But Gryzwacz said the crowds, volunteers, and even the announcers were welcoming to the bandit tradition.

“Once I was at the starting line and everyone was cheering for us, all of the nerves totally vanished,” said the former member of the Emerson men’s cross-country team, who graduated in December.

John Furey, Emerson’s cross-country coach, said that running as a bandit takes nothing away from the achievement.

Furey has trained runners for the marathon for 20 years and has run it himself — officially — eight times. He helped train all of the Emerson students who ran the marathon.

Grzywacz did not have the opportunity to qualify and register because this was his first marathon, but that didn’t stop him from completing the race in three hours and 54 minutes, in the heat.

“I was just happy to have gotten it in under four [hours],” Gryzwacz said. “The heat was a killer.”

The heat hindered Pietroski from accomplishing her goal time as well. She came in an hour later than she expected at four hours and 25 minutes.

“Nothing will ever be as hard as that, ever. I now know the feeling of true exhaustion.” Pietroski said as she nursed a sizeable blood blister on her toe. “I probably could have hit my goal if it wasn’t so hot out there.”

The Boston Marathon is one of the only races, outside of the Olympics, that runners have to qualify to enter, according to Furey. Runners can also earn a spot by raising money for a charity, or as a complimentary spot for organizing the race, according to an article in The Boston Globe. Otherwise, Furey said, an aspiring runner is left to be unofficial or not run at all.

Molly Pietroski, a runner for the women’s cross country team, said she was offered a number from a charity a few times in the weeks leading up to the marathon, but said it was hundreds of dollars just to register, and she would have had to raise thousands more after that fee.

“I couldn’t commit to it the way I would’ve wanted to,” the senior acting major said.

Qualifying times were first instituted in 1970, and Furey said that banditing allows people who would not normally be able to compete to run the race.

“There are people that, as hard as they train, they will never be fast enough to qualify, but they want to be a part of it,” Furey said. “Bandits are kind of a part of the history of the race and the race’s culture.”

John Hanc, a contributing editor to Runner’s World and author of the forthcoming “B.A.A. at 125: The Colorful History of the Boston Athletic Association,” has run 27 marathons, including the Boston twice, and is an Emerson alumnus. He said he would never run a race unregistered, but can understand the place for bandits at the Boston marathon.

“While I don’t normally condone bandits in races, Boston is indeed an exception,” Hanc said in an email. “They have become sort of their own subculture, the ‘official unofficial’ runners, if you will, and I think they kind of exemplify a kind of feisty, independent streak that many runners can identify with.”

Women’s cross-country captain Heather Hoglund ran her first marathon as a bandit last year.  She said she noticed there were two types of bandits  —  those like herself, and the others who dressed up in funny costumes. One man dressed as Jesus, another in a full business suit with a sign that read, “Playing hooky.” She said that she thinks the culture helps make an elite race a bit more entertaining.

“I think bandits enhance that whole race,” the junior visual and media arts major said. “The elites are great to watch  —  that is a sport  —  but we kind of make it fun, I think.”

Isabel Thottam was the only Emerson student who ran with an official number. She was granted a bib through Samaritans, Inc., a suicide prevention organization that she volunteers for. The junior said she had no qualms with running the race as a bandit, but a chance to register officially presented itself.

“I was planning on just running bandit, but then had the opportunity to do it for charity and do it for a cause I really cared about,” Thottam said. “Tying the cause onto it definitely motivated me.”

Thottam said she had to pay $300 to register for the marathon and raised $5,000 for her charity. She said she plans on running the marathon again next year, but will probably run it unregistered. The association states that the fee is $150 if one qualifies for the race.

“It was a lot to raise for one person. I don’t have that kind of money, and I feel bad asking my friends for it. It was hard to raise the money,” Thottam said.

After hours of grueling pain in the Boston heat, Pietroski and Gryzwacz crossed the finish line in Copley Square, both drenched in sweat, and were greeted by friends and family.

Once all of the runners have crossed the starting line, whether they are registered or not becomes irrelevant, said Gryzwacz.

“Number or no number, you still ran the same race, the same distance, the same course. When everyone crosses that finish line, everyone is just in this weird haze. We are completely drained and we are all kind of united in that sense,” Gryzwacz said, “in that half-dead sense.”