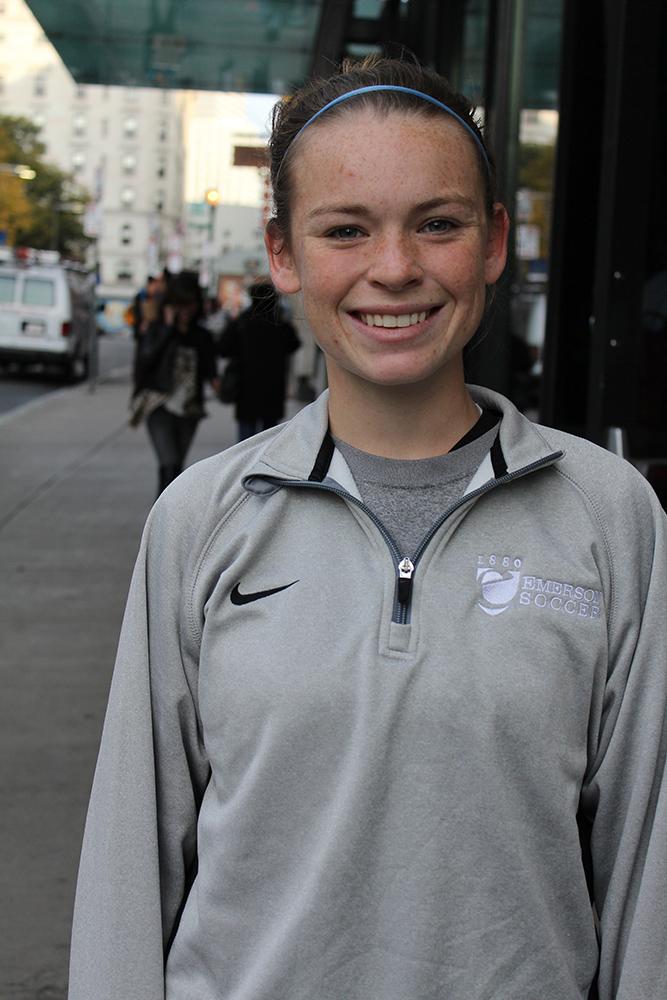 Sophomore midfielder Tayllar Righini leads the Emerson women’s soccer team in goals this season, and no goal was more important than her most recent one.

Emerson had gone winless in six matches before Righini broke through for a 16th-minute tally against New England Women’s and Men’s Athletic Conference foe Coast Guard in a 1-0 win for the Lions (7-10-1, 2-6-1 NEWMAC) on Oct. 26.

The Lions’ senior keeper Marissa MacDonald made four saves, all in the second half, for her second shutout as Emerson won for the first time since Sept. 28, a period of 28 days.

The team’s longest previous win drought during this season was seven days.

Righini has five goals and is second on the team with three assists, making her the Lions’ most productive offensive player ahead of classmate Alyssa Giannone, who has two goals and five assists.

“I feel really good about this group of players,” said Suvak, mentioning that defenders Casey Jablonski and Samantha O’Donovan are Emerson’s only other graduating players. “I think what we have is a very bright future ahead of us.”

Emerson has struggled since beginning a stretch of eight NEWMAC matches to close the season, starting with an Oct. 5 loss at Worcester Polytechnic Institute. The Lions were eliminated from reaching the NEWMAC Tournament with a 1-0 home loss against Massachusetts Institute of Technology on Tuesday, Oct. 29.

Righini has scored two of the Lions’ three goals since they began running the NEWMAC gauntlet in October.

She also scored in the 78th minute on the road against Babson on Oct. 22. That goal sent the match to overtime in an eventual Emerson loss.

“She really is our on-the-field captain, the leader of our attack,” Suvak said. “I’m happy for her because she’s scored quite a few goals, but I’d like to see her even score more than that — I think she has that ability in her.”

Although Righini also plays lacrosse for Emerson, Suvak said she stays sharp by training with male soccer players in the offseason. He lauded her technical skill and her speed of play.

“She has the ability to be very composed on the ball and her stopping and starting and ability to keep a defender off-balance is fantastic,” Suvak said. “Not too many female soccer players that I know have that ability.”