‘Roads is where the heart is: Neighborhood pub kept alumni coming back 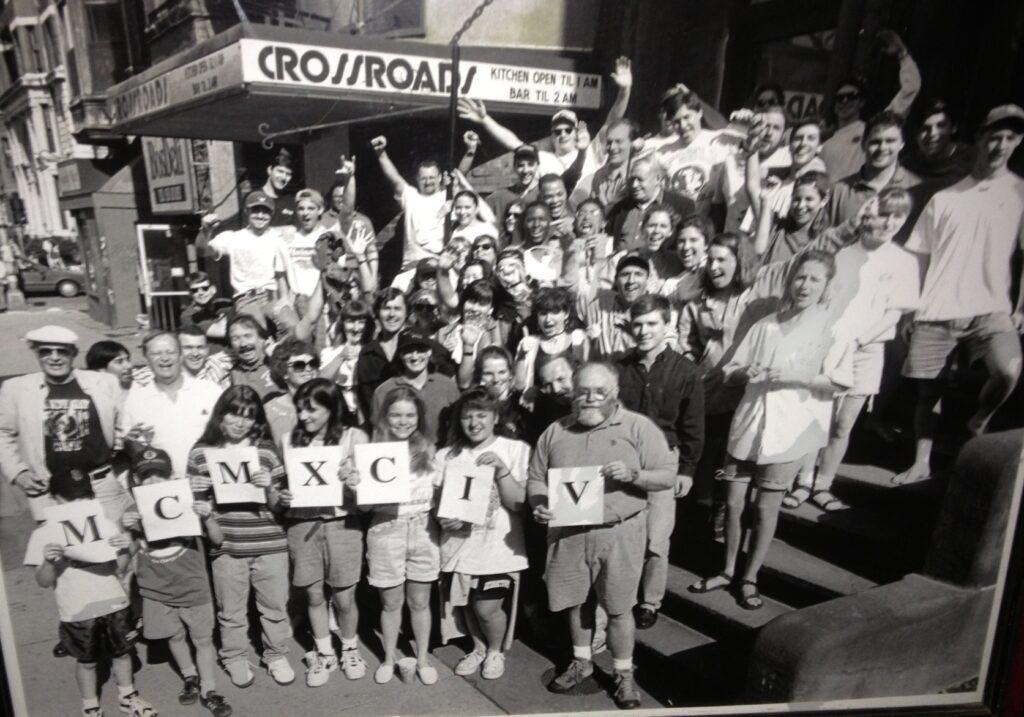 When news broke in June that Emerson College would be expanding into Boylston Place, many students and recent graduates cried foul — but not necessarily over the dormitory the college plans to build. They were more worried about what the expansion would mean for Sweetwater Tavern, the Emerson-favorite bar in the Boylston Place alley.

But Sweetwater-goers are not the first Emerson contingent to face losing a beloved campus-adjacent watering hole — not even the first this year.

On April 12, alumni gathered to drink, reminisce, and find themselves in the pictures on the walls of Crossroads Irish Pub, which would close a week later. From 1978 until the college left Back Bay, ’Roads was an Emerson fixture. Students looking to get a cheap beer, meet someone new, or hang out with friends would make their way to the Beacon Street bar, just a few stumbles away from the Charlesgate and Fensgate residence halls.

“From my sixth floor dorm window, I could look down and see when they flicked on the light that said ‘Crossroads,’” said Andrew Fone, a 1988 alumnus, in a phone interview. He didn’t make it to the alumni event in April, but Fone said during his time at Emerson, and for three years after graduating, he washed dishes, worked the door, tended bar, and managed at Crossroads.

The pub made it easy for a college kid to fall in love with the place: Along with the convenient location, it was affordable — a free pizza came with a $5 pitcher on Wednesday nights. And with two floors, Crossroads hooked younger students by opening its lower level to the under-21 crowd for reasonably priced food.

The relationship with Crossroads was near-official: Fraternities and sororities held events there, and college yearbook The Emersonian dedicated spreads to the bar for years — in its 1993 list “20 Perfectly Logical Ways to Deal with Stress,” number 17 was simply “Crossroads.”

Emerson students would filter through the bar so often that, lacking the methods of instant communication available today, they would leave messages with the bartenders to pass along to their friends, said Margie Sullivan, a former Crossroads waitress and president of Emerson Alumni Boston Chapter.

“Everyone would stop in there at some point,” Sullivan, a 1981 graduate who helped to arrange the event in April, said in a phone interview. “We spent so much time there. It was kind of like home.”

Jonathan Satriale, a 1994 Emerson grad and technology director for Emerson’s School of Communication, said the love was reciprocal between Emerson and Crossroads: Students kept the bar busy, and the bar would employ students looking for work.

Michael Brodigan, who owned the bar from 1978 until 2005, said it just worked out that way — Emerson kids happened to ask for jobs, which would attract their friends to apply, too.

“The BU and MIT kids weren’t really looking for jobs,” Brodigan said in a phone interview. “I don’t know why. The MIT kids were probably busy studying all the time.”

Before Brodigan bought Crossroads, it was known mainly as an Italian joint—Sullivan referred to it as a “mob hangout.” While Crossroads under Brodigan was nominally an Irish pub — all four of his grandparents were from Ireland — he didn’t force the theme (though Crossroads did serve free corned beef and cabbage on St. Patrick’s Day).

Instead, he modeled the place after the neighborhood taverns he saw growing up in Dorchester. He arranged a yearly group photo of patrons, staff, and family members, hoping to build not only a sense of community, but also a loyal base of customers.

“Alumni weekend, all you had to do was go to ’Roads and you’d pick right up where you left off,” said Satriale.

Despite the appeal of having a place for Emerson folk to gather, part of its allure was the diverse crowd, both at the bar and behind it.

“The whole thing about Crossroads was the gestalt of the place. It wasn’t just Emerson,” said Sullivan, recalling a kilt-wearing bartender and Palestinian cooks ranting about Israel. “No one was afraid to say whatever they wanted tosay.”

Fone, who now works as a producer for Fox News, said the scene at Crossroads helped him in his career.

“I learned to speak a handful of Arabic words working in the kitchen,” he said, “and later in life, those few words would become extremely important getting out of jams when I was in Baghdad.”

Crossroads has a few claims to fame, as well. The bar gets a shout-out in the book Bringing Down the House, which later became the movie 21, as a frequent haunt of one of the card-counting MIT students. And Richard Yates, the late author of Revolutionary Road, spent many a rough night at Crossroads. For a while he even lived right above the bar, and later about a block away.

“I knew by Dick’s face what he wanted to drink, whether it would be a beer or a bourbon,” said Sullivan. Sometimes it wouldn’t end well: “I’d go over and say, ‘I think you’d better have something to eat,’ then walk him to his apartment.”

Whether it was the diversity, the community, or the colorful characters, something about Crossroads kept Emerson students coming back.

“I was on a first name basis with most of those kids. Some of them I knew for six or seven years,” said Brodigan, who said he now helps run a bar with his son in Canton, Mass. “I couldn’t tell you their last names, but I could tell you their first names.”

***
The 1986 Emersonian predicted that Crossroads would be an essential part of Emerson as long as the school remained in Boston, probably alluding to the college’s plans, later scrapped, to move to Lawrence, Mass. But the writer might not have anticipated that a move within Boston might diminish the connection, too.

Aubrey LaDuke, a senior visual and media arts major, had no idea of Emerson’s history with Crossroads when she was hired to waitress there in the fall of 2011. But she soon noticed that patrons would bring up the history when she mentioned her school.

LaDuke, who left the job at the end of her sophomore year in spring 2012, said she saw the group photos lining the hallway to the bathroom. But by the time she stepped foot in the bar, that tradition had ended since before Brodigan sold the place to a restaurant group in 2005.

“It kind of felt like it was past its prime,” LaDuke said, though she said she loved the food. “There were Guinness decorations on the walls, but we didn’t have Guinness.”

Looking back on its heyday, though, regulars couldn’t help likening their experience to the massively popular sitcom Cheers. Some parallels are obvious: Crossroads is on the same street as Bull & Finch Pub, which the show’s bar was based on, and the program’s 11-year run roughly aligns with Crossroads’ time as an Emerson mainstay. But more than those reasons, alumni said it really was a place “where everybody knows your name.”

“I used to send Crossroads postcards when I’d travel,” said Satriale. “They put them all up on the wall. I just equated them as a second family.”