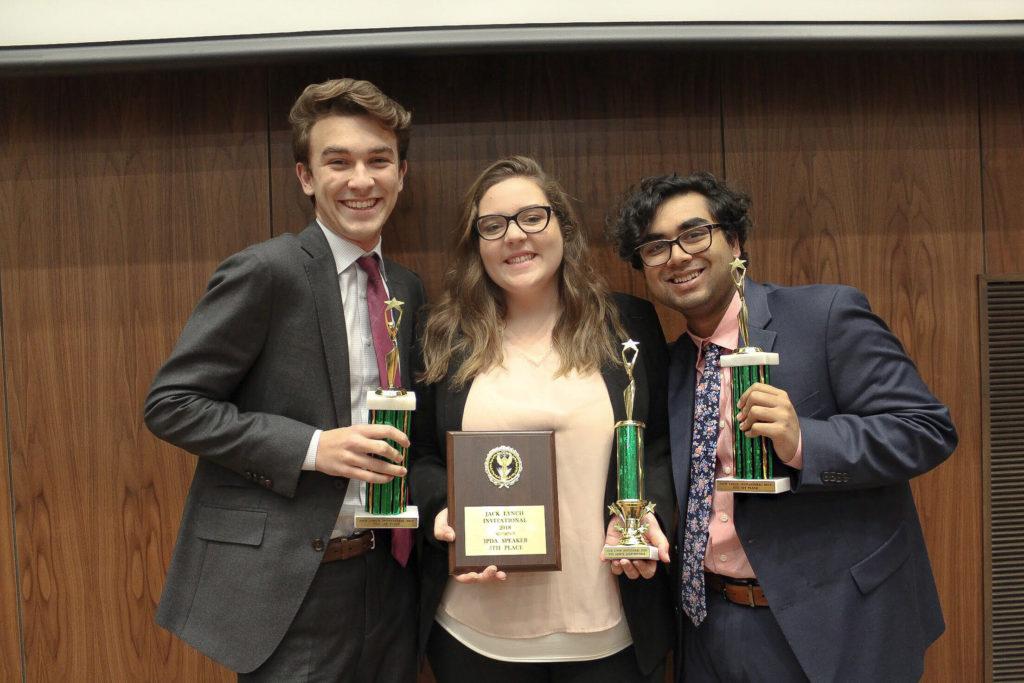 After their first college forensics team competition, freshman roommates Karthik Ramaswami and William Rowley pranced through the halls to get rid of their nervous jitters. The two beat over 50 other students in the duo interpretation category to take home first place.

Ramaswami and Rowley, along with the five other students on the Emerson Forensics Team, competed at the regional tournament held at Saint Anselm College in Goffstown, NH during the first weekend in November. Both roommates had not competed since representing their respective high schools in the national competition in June.

“You’re pretty nervous your first time because it’s the first competition of the season,” Ramaswami said. “It’s obviously an extra nervousness because you haven’t performed your piece in front of an audience yet.”

At the same competition, freshman Sara Hathaway reached the quarterfinals in the International Public Debate Association debate and placed fifth overall out of over 70 debaters.

“My first [round] is one that I won, and it was that the Fourteenth Amendment should be rewritten and I was the affirmative,” Hathaway said. “I also had a proverbial one, which was that a man could still be brave even if he is afraid. You have to contextualize it and put it into a grand scheme of things and prove why that statement is true.”

Duo interpretation is a rehearsed performance where two team members spend weeks piecing together various pieces of literature into one performance. The event also included one-on-one competitive debates, where participants can only prepare to argue in favor or against any topic for 30 minutes.

The duo interpretation event occurred in a classroom with a small audience consisting of the judge and other competitors. Ramaswami said six duos compete in each round.

Forensics focuses on public speaking and debate. Ramaswami described performing with the forensics team as “competitive acting.” Hathaway said her event dealt more with logic and argument, while Ramaswami and Rowley rooted theirs in performance ability. She said she debated in a room with her opponent and one judge.

“It’s very on-your-feet,” Hathaway said. “You prep in 30 minutes while you’re there, and you’re not very scripted. It’s very off-the-top-of-your-head.”

Ramaswami said in duo interpretation, the only two-person event in speech, team members cannot look at each other or touch each other, but must act together. Ramaswami and Rowley performed a compilation they created of pieces of vignettes, articles, poems, and a play.

Ramaswami said students from across the country attended the tournament.

“We had people from Kentucky and Ohio at this tournament,” Ramaswami said. “It’s cool just to see these people perform in front of you. It’s also really awesome to see how people put the time and effort that they do. We’re all really nervous, but we’re all really excited to share what we have.”

Hathaway said she joined the team because Hawkins reached out to her after a speech communication class.

“It seemed like a really good fit and, if he had faith in me, I figured that was a good sign,” Hathaway said.

Emerson professor Deion Hawkins serves as the team supervisor and said that he has participated in forensics since he was 13 years old. He says there is a difference between speech and debate.

“I always like to explain it like track and field,” he said. “In track and field there are different events, different categories, but they all come together for one trophy. That’s kind of the same thing.”

The team meets weekly to touch base with Hawkins. Hawkins said he prepared Hathaway for the International Public Debate Association debate by giving her only 20 minutes to prepare in practice rounds. Ramaswami said he and Rowley practiced almost daily, meeting with Hawkins four days a week and practicing together the other three days.

“[Hawkins is] a very hands-on coach, so he really wants to be with you throughout the whole process,” Ramaswami said. “He really helps you grow as a competitor, and that’s the first time I’ve ever had a coach like that.”