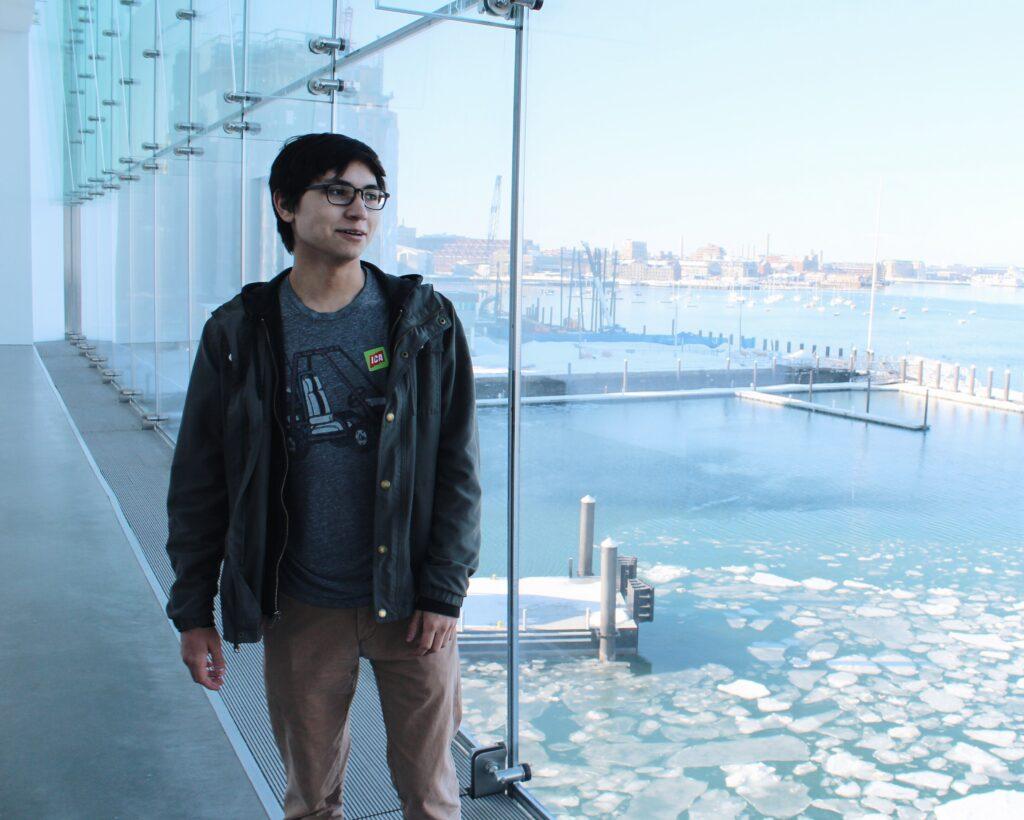 By Laura King, The Berkeley Beacon

Last spring, Ishmael Rosas performed stand-up at The Hideout, a bar in Faneuil Hall. He and his friend, fellow Emerson student Natalie Torres, had signed up for the open mic after participating in similar events on campus.

Torres, a junior visual and media arts major, said she remembers worrying that the “seedy” adult Boston locals at the bar wouldn’t understand the quirky comedy of college students. But when Ishmael told a fictional story about watching his dog die, it got the cynical audience laughing.

Rosas was 20 years old when he passed away on Feb. 29. His mother, Laura Smith Rosas, said he suffered from depression that he hid from those close to him.

Rosas grew up in Storrs Mansfield, Connecticut, with his mother, an elementary school teacher. Rosas started at Emerson in spring 2015, where he was studying visual and media arts to pursue a career in screenwriting.

Smith Rosas said her son found his passion for film early in adolescence. He would use sheets to make green screens, creating videos where his head would suddenly disappear. In middle school, Rosas’ mother bought him a software for producing special effects.

“There are videos where he made my car blow up, or where the house was on fire,” Smith Rosas said.

Along with filmmaking, Rosas was very active. His mother said he got his black belt in karate when he was 12 years old. He also participated in Boy Scouts, gymnastics, and soccer, and enjoyed backpacking and camping.

Rosas and his mother are practicing Quakers. In high school, Rosas was a religious educator for children’s First Day classes at his Quaker meetinghouse, Storrs Friends Meeting.

“They had never hired someone so young to be the teacher,” Smith Rosas said. “Young students responded well to him.”

After graduation, Rosas set his sights on Emerson because of the connections he could gain in the screenwriting industry. He combined his knack for video editing and dry humor in his final project for his Foundations in Visual and Media Arts Production class: a retro infomercial for the obscure and largely metaphorical product, “Neuroscope.” It features kitschy transitions, comedically uncomfortable acting, and an unhelpful description of what this product can do for the viewer.

William Palumbo, artist-in-residence in the visual and media arts department, taught Rosas’ Foundations course last spring. Palumbo said that he refers to Neuroscope when teaching his students in current classes about parody or spoof.

“I’ve seen a lot of bad ones, and that one was really good,” Palumbo said. “The tone of it was pitch perfect, and the randomness came at the right time.”

This was Rosas’ style: quiet, dry, and funny. Pierce Campion, a junior visual and media arts major, lived with Rosas in a Piano Row residence hall suite earlier this year. Campion said that it took a while for Rosas to warm up to the other boys they lived with.

“But when he came around, he was super funny,” Campion said.

Suitemate Ryder Gerring, a sophomore communication studies major, said that Rosas was always introducing them to new comedy television shows, including HBO’s Curb Your Enthusiasm and Adult Swim’s Tim and Eric Awesome Show, Great Job!. Although Rosas did not often play video games, he would stay up until the early hours of the morning with his suitemates as they did.

“He enjoyed being in our company, even if he wasn’t necessarily involved,” George Geanopulos, a sophomore visual and media arts student and a suitemate of Rosas’, said.

Campion, who is in Emerson sketch comedy troupe Chocolate Cake City, said he was initially surprised when he found out Rosas was interested in stand-up comedy.

“It’s not because he wasn’t funny,” Campion said. “The kind of people who are quiet and then they snipe really good jokes, to me, seem too funny to be interested in stand up.”

Rosas’ Twitter account was a source of hilarity amongst his friends. He would tweet ridiculous photos with no captions, like an unproportionately large elderly man hugging a tiny old woman, and other nonsensical statements. One post of his reads, “gonna name my son fondue jr.”

Campion said he appreciated that Rosas knew he was funny, but also could tell when something was worth saying. Rosas didn’t coddle anyone with his sense of humor, either. He did not give pity laughs.

Despite this, Rosas had a comforting presence. Shawn McNulty-Kowal, a sophomore writing, literature, and publishing major and friend of Rosas’, said that there was never any pressure to impress Rosas. He said it was easy to just be oneself around him.

Torres said that Rosas was one of the first people she met at Emerson, and she had a similar impression upon meeting him.

“I felt like he was someone who, from the beginning, I didn’t with to be fake with,” Torres said. “I never had a face on while talking to him.”