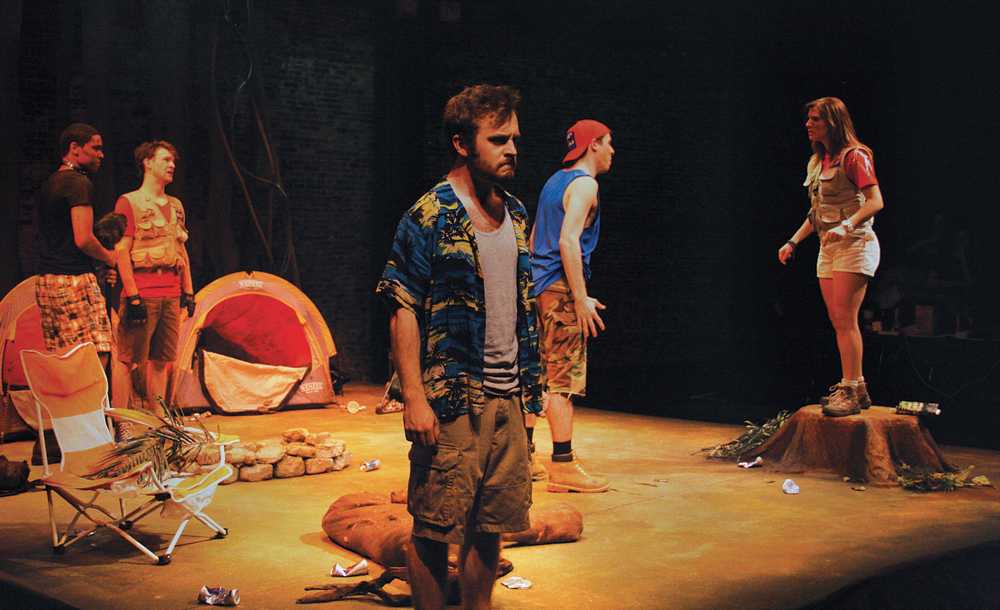 A year ago, Patrick McDonald didn’t have an inkling of the idea that would become the black comedy Rough & Tumble. Now, after a whirlwind past couple of months, McDonald is afforded an opportunity few see: the premiere of his first play.

This past November, McDonald submitted Rough & Tumble, which premieres tonight at 8 p.m. in the Jackie Liebergott Black Box Theatre, as part of this year’s Newfest, an annual festival featuring readings and performances of student-written scripts. McDonald won the Rod Parker Playwriting Award, an honor given since 1991 that grants an Emerson student a cash prize and full production of his or her script to the theater via Emerson Stage.

“It’s incredibly funny, very witty, and it felt finished,” director Joe Antoun said of the script. Antoun also served on the selection committee for the award. “It felt like a play with a heart, a play where something happens.”

“People making others laugh is underrated,” said the senior acting major. “I wanted to write a show that people would enjoy seeing.”

The result of this ambition is a darkly humorous take on survival reality television shows like the Discovery Channel’s Man vs. Wild.

“I wondered, what if the crew hated the host? What if he was a jerk?” said McDonald.

The show ponders what would happen if the crew of a reality show were to accidentally cause the death of the host of their program. Dusty Bronson, the host, remains unseen in the play, but is heard dropping from a tree to his doom early on. The crew of the TV show, also called Rough & Tumble, is then faced with the ethical dilemma of how to proceed — all the while jangling each other’s nerves. Curran Russell, Melina Chadbourne, Giovanni Naarendorp, Andrew Asper, Jeff Mitchell, and Robert Carroll portray the various members of the crew.

The set, from scenic designer Alyssa Dillon, elaborately depicts a campsite in the middle of the Amazon. Tents, lawn chairs, a fire pit, and over a dozen crushed-up cans of Red Bull litter the stage, perfectly yet subtly illustrating the high-strung emotions of the crew members as they devolve into animalistic madness.

“It raises questions about our own humanity,” Antoun said. “It says a lot about humankind when it comes to our ambitions and our survival.”

Junior performing arts major Curran Russell plays scene-stealing Trevor, the production assistant of the survival show. His peppy eagerness — complete with phrases like “Oh, cheese and rice, you guys” — bears a striking similarity to farm-boy-turned-NBC-page Kenneth Parcel on the television show 30 Rock. But Russell was careful not to let Trevor devolve into caricature.

“As an actor, my job was to figure out the balance between keeping this character clownish but still grounded,” said Russell. “My character is not taken seriously at the beginning, but in the end, both the characters and the audience learn to.”

Trevor’s offbeat qualities dominate the character at the beginning of the play, but Russell said that by the end of the production, both the other characters and the audience take him seriously. It’s Trevor that calls for the humans to reclaim their dominance over nature and animals.

“We capture them. We wear them. We eat them,” he says during a show-stopping monologue near the end of the play. “We have risen above the animals, now it’s time we start acting like it.”

Rough & Tumble premieres tonight at 8 p.m. in the Jackie Liebergott Black Box at the Paramount Center. The show runs Friday at 8 p.m., Saturday at 2 p.m. and 8 p.m., and Saturday and Sunday at 2 p.m. Tickets are $12 for the general public and $8 for the Emerson community.