Runners choose between championships and Quidditch 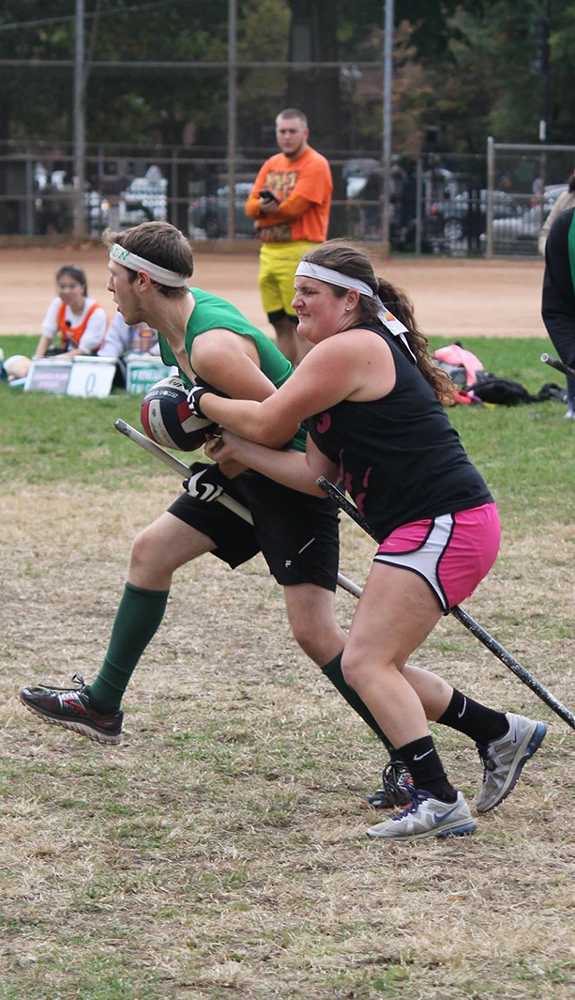 Emerson student athletes are often faced with time conflicts between their sport and the other activities they participate in. Sophomore Martha Connolly, junior Mike O’Connor, and senior Kieran Collier, all cross country runners who also play Quidditch, have had to deal with the multiple conflicts that have arisen between the two.

Because cross country and Quidditch both occur in the fall season, the three athletes agreed that the scheduling conflicts are plentiful. Both the New England Women’s and Men’s Athletic Conference Championship race and the Quidditch regional championships were on the weekend of Oct. 31.

Connolly said she and Collier went to the regionals, while O’Connor attended the NEWMAC race. The three said the decision about which event to attend wasn’t easy.

“Regionals is how you qualify for the World Cup, [the national championship games], so that’s probably the biggest Quidditch event of the year,” O’Connor said. “I just felt like, as a captain, I needed to be there for my cross country team.”

Collier said he was on the opposite end of the spectrum in terms of his choice.

“I was in a leadership position for the Quidditch team,” Collier said. “I will probably play after graduating, so I chose that over cross country this past weekend.”

The three got their start in both sports in different ways.

“I was like, ‘Maybe I’ll go play Quidditch and it’ll be a good time,’” Connolly, who is now the vice president of the House League Quidditch intramural program, said. “Someone from cross country put me in contact with someone from the team and I instantly thought, ‘What a great way to do another sport.’”

Collier, who is a captain on both the full-contact World Cup team and one of the six more flexible, less aggressive intramural teams, said he didn’t do anything athletic until he came to college. He instantly got into Quidditch, and then was asked by his friends to run cross country. Collier started running his sophomore year.

The three student athletes said that the long-term strength necessary for cross country benefits Quidditch, too.

“Cross country is going to help your overall health, so that’s obviously helpful to team sports too,” said Connolly. “From a strictly athletic standpoint, having running practices throughout the week is like cross-training for Quidditch. The two work hand in hand.”

O’Connor said that having athletes with the stamina for playing a whole game helps the general success of the team.

“As opposed to hockey-style quick substitutions, if a lot of the players have the ability to play a full 90 minute game, then there are a lot more options for problems such as players with injuries or other fatigue,” O’Connor said.

With lots of time cut out for practices between both sports, and other extracurricular activities, the question of when they have time for just being normal college students arises.

“Honestly, it’s not that hard,” Connolly said. “Sometimes I need to stay up a little bit later, but I’m in college. I’m taking classes that I really like.”

“We know our cross country schedule, and so we schedule our classes around it,” Collier said. “Usually, on Wednesdays, I’ll go on a five or six mile run at four, and then have about an hour to cool down, and then we’ll have Quidditch from six to eight and then after, I can do homework.”

O’Connor, who said he balances about four or five extracurricular activities with school, thinks that the sports are the most manageable part of his time commitment.

“Sports are such an easy slot of time,” O’Connor said. “I don’t usually find time conflicts with them, but instead with the other activities that I am a part of.”

Collier said that both programs have very strong character.

Connolly said that the future of cross country-Quidditch players is bright.

“The crossover is not something that is just us,” Connolly said, referring to herself, O’Connor and Collier. “There were lots of people before us who were doing both sports, and I’m sure that there will be people after us who do both as well.”