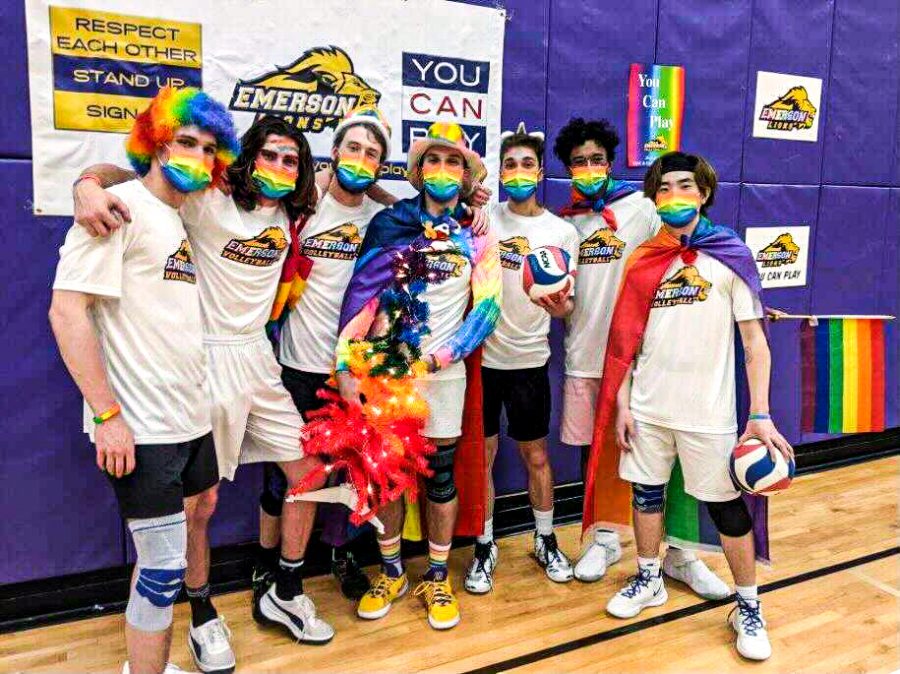 The event is entirely student-run, with Sam Willinger (center) leading the way.

You Can Play Week, an initiative spearheaded by the Student Athletic Advisory Council and the men’s volleyball team to promote safety and inclusion for LGBTQ+ athletes, is underway at Emerson this week.

It is the third consecutive year that the SAAC and the men’s volleyball team have held a You Can Play event, but the past two years consisted of a single game rather than an entire week. With the help of the Athletic Department, SAAC president and men’s volleyball captain Sam Willinger wanted to make this year the best one yet.

“It was just more of us saying, ‘We want to do it bigger,’” Willinger said in a Zoom interview. “And [the Athletic Department] said, ‘All the power to you, do your thing.’”

The event is entirely student-run, with Willinger leading the way. Men’s volleyball head coach Ben Read said he made sure the event did not conflict with their plans for celebrating their senior athletes, but any further involvement from him or any other members of the Athletic Department has been minimal.

“This has really been a big project of Sam’s,” Read said in a phone interview. “He’s kept me in the loop, but I haven’t had to do any planning. This is Sam’s thing, and we obviously support him for what he’s trying to do for Emerson College, our Athletic Department, and all LGBTQ+ athletes.”

The National College Athletics Association acknowledged the discrimination LGBTQ+ college athletes experience in a survey, and emphasized that the majority of discrimination is “in-house” harrassment. While Title IX is historically widely interpreted to protect women from being discriminated against in sports, many current interpretations say the amendment also applies to LGBTQ+ athletes.

To bring attention to the struggles LGBTQ+ athletes face, Willinger and the SAAC decided they needed to take the event to the next level. To do so, they reached out to Emerson’s athletic community. Now, many other teams are participating for the first time this year. Willinger said it was easy to get his peers on board and he thinks it can have a substantial impact on Emerson athletes both now and in the future.

“If a team can post a picture of them wearing [rainbow clothing], it can encourage a lot of students to not only come here, but the ones that are here to feel more included and more involved, even if they don’t want to talk about it yet,” Willinger said.

Willinger and the SAAC hope the event reaches beyond just the Athletic Department as part of a longstanding effort for athletes to take on a larger advocacy role within the Emerson community. Junior men’s volleyball player Josh Elliot shared his thoughts on how other community members can help promote the event.

“Normally, I would say show up to games and wear your rainbow stuff, but obviously that’s not an option this year,” Elliot said in a phone interview. “I would say to share it on social media because it’s more about getting the word out than anything.”

Willinger said he sees You Can Play Week as yet another opportunity for an olive branch to be extended from athletes to the rest of the student body.

“We’re trying to build that bridge, and for non-athletes it’s a great opportunity, so when we do start having games again, come through and see what the vibe is,” Willinger said. “If you have a friend on the team, go support them. They’d love to see you, and ask us to support you, ask us to find time to go to your performances, to see shows.”

Elliot and Willinger also encouraged the use of the hashtag #emersonycp on social media this week to support the initiative.

Willinger, a graduating senior, said he sees room for improvement in many areas of the college, but is grateful the Athletic Department has become his home.

“We still have a lot of work to do, but I think we are so much further ahead than a lot of places,” Willinger said. “That gave me a sense of belonging here that I didn’t have in other places.”

Willinger will soon be moving on from Emerson, and he hopes others fill his shoes and continue projects like the You Can Play Week. He wants the college, the Athletic Department, and all Emerson teams to continue to realize the importance of supporting LGBTQ+ athletes.

“We do need to show our support for groups, even if it’s clear, even if we know it, even at Emerson College, we need to regularly remind people that we’ve got their backs, and that everyone can play.”

The NCAA offers numerous online resources for LGBTQ+ student athletes, which readers can access at https://www.ncaa.org/about/resources/inclusion/lgbtq-resources.