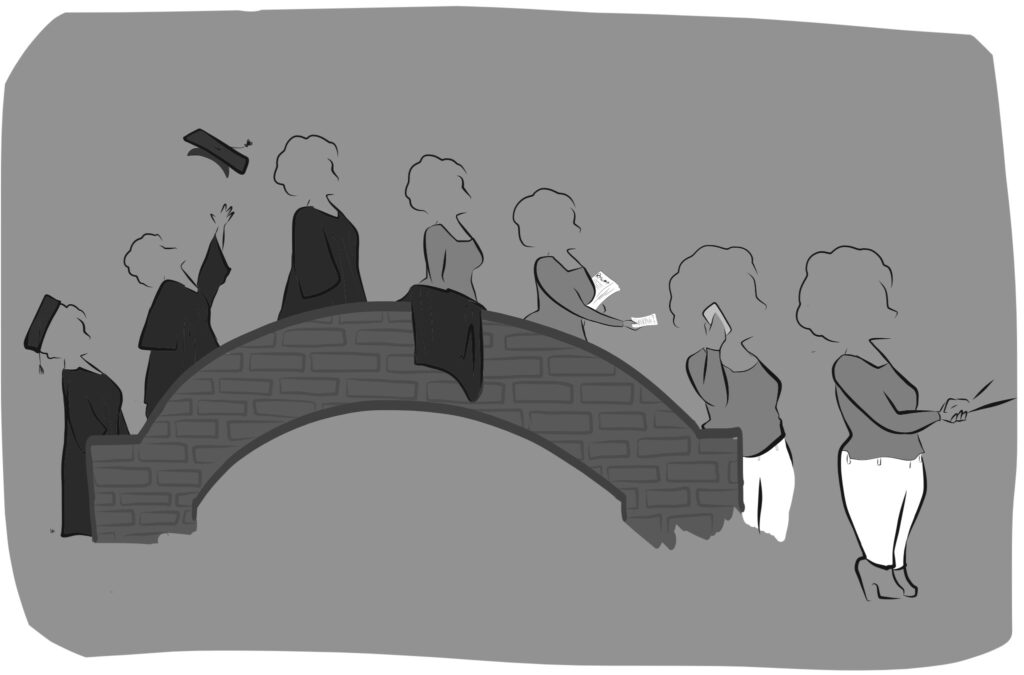 With a degree in hand, many Emerson graduates walk away to post-grad life, moving to Los Angeles or New York to pursue various careers. However, sometimes Emerson connections remain strong and many others return later on in life to work at the college in positions ranging from clinical instructors to professors to coaches.

There are many writing, literature, and publishing professors with master’s degrees from Emerson, a phenomenon that can partially be traced back to a unique opportunity the college offers to its WLP graduate students.

This program allows them to teach a course to undergraduate freshmen for credit. The graduate course is called WR600, and after completion they are invited to apply to teach a WR101––Intro to College Writing or WR121––Research Writing class as part of the first-year writing program. Although not originally designed as a path to get students jobs at Emerson, it has allowed many former students to gain a few years of experience after graduating before they choose to stay or move on. The program usually hires about 10-12 new instructors each time, according to the program director, Steve Himmer.

“The graduate student faculty tend to be very much in tune with working writers,” Himmer said. “In a way that I think resonates with a lot of Emerson students. It makes a really effective connection.”

Another benefit of the program is that the WR600 instructors help students form their class syllabuses. That way, when the students go on to teach, they are a step ahead, and have completed a program with a high focus on professional development, according to Himmer.

Priscilla Andrade is one of these professors. Andrade completed her master’s in 2014, but has already been teaching at Emerson for three years. She described the program as being a bridge that brings graduate students into the working world, which she herself was nervous about.

“[Emerson] was a place that I was familiar [with],” Andrade said. “It was a place I already had allies, and a community of people where I could go for help. [Emerson] sort of feels like a good community for people to return to and continue to incorporate what they feel is important to this institution, because they know it.”

Alumni make up a substantial percentage of the faculty at Emerson. According to the college’s website, approximately 25 percent of both the writing, literature and publishing department and the communication studies departments’ faculty hold at least one degree from Emerson, with multiple professors receiving both their bachelor’s and master’s from the institution.

Collaborations between past students and teachers can be found throughout other areas on campus as well. Elaine Rudel, a clinical instructor, was contacted by an old instructor to work with her in a graduate program. Rudel, who is in the communication sciences and disorders department, is working for the program—which she said she admired and participated in as a student more than 10 years ago—supervising student clinicians.

After completing her graduate degree from Emerson in 2002 in the communication sciences and disorders department, Rudel began work in her field in an early intervention program that included making home visits and supporting the families of children with disabilities.

Seven years after finishing graduate school, she got a call from Betsy Micucci, the director of the Robbins Speech, Language and Hearing Clinic located in Emerson’s Union Bank building, offering her a position in the same program she had completed. This is the Thayer Lindsley project, which helps families who have children with hearing problems by supporting the parents and helping the children develop their communication skills, according to it’s website.

Micucci said that as the original position opened up, she knew that Rudel would be qualified, since her success as a graduate student and the work she had been doing after college provided relevant experience to the position.

“From my perspective it was very smooth and collaborative [process],” Micucci said. “If you hire an alum, they understand the culture and know our systems. They have been through it as graduate students and they know our procedures.”

Andrea Martucci is another alum who found her way back to Emerson. Martucci received encouragement from old professors to return back to the Boston campus less than a year after she left.

Shortly after her graduation in 2008 with a degree in WLP, Martucci was working for a screenwriter when she was invited by Ploughshares to apply for their managing editor position. Martucci got the job and returned to Emerson’s campus.

“[Working here] makes [me] reflect back on when I was a student,” Martucci said. “You get a much better understanding of what the faculty were trying to do before, and an appreciation for the skill that they had, and how hard it is to actually teach.”

Emerson alumni can also be found outside of academics. Newly hired baseball coach Nick Vennochi was a journalism major who graduated in 2011 and played for the team.

Vennochi said that being a former Lion brings an advantage to coaching because he’s familiar with the ins and outs of the college, and hopes to extend his connections from Emerson to his team. This would help the players gain insight from alum to help them become more prepared for a future career.

“It should help the team [that] I know everything they’re going through on a day to day basis,” said Vennochi. “I can plan the way I’m going to be, not just motivate them. I’m one of the same guys that they are.”