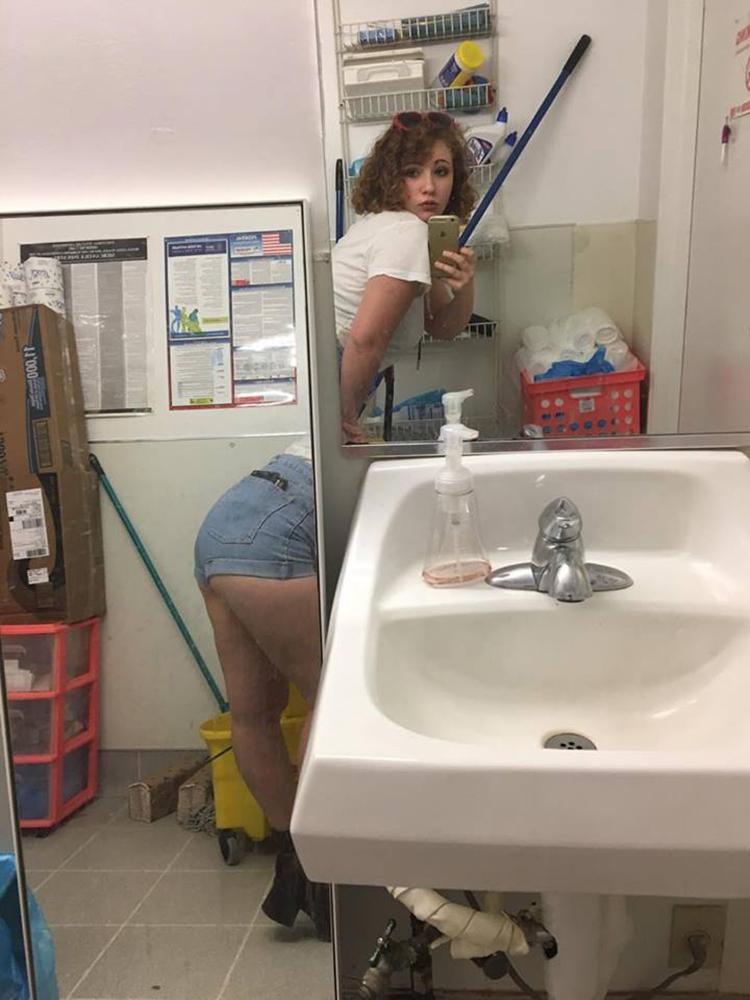 When Danielle Shvartsman snapped a picture of herself in a mirror within Los Angeles’ famous Magic Castle, she was disappointed. She liked the photo, but had nowhere to post it.

The Magic Castle—a large, secretive nightclub dedicated to performance magic and fine dining—doesn’t allow photography inside. But Shvartsman, a 22-year-old who graduated from Emerson in 2016 with a degree in visual and media arts, was not crestfallen for long. One of her friends invited her to a private Facebook group a few days later; Shvartsman immediately knew she found a home for her photo.

This group, called “mirror selfies,” offers a safe space for people to post their self portraits online. These posts are frequently accompanied by text that can be either deep—a thorough description of the photographer’s mindset—or simple—an update on where the picture was taken. Shvartsman opted for the latter, thanking the friends who had invited her to the group.

The group was created in early December by Delilah Kaufman, who also graduated from Emerson in 2016 with a degree in visual and media arts. The 21-year-old set up the group as a way to encourage self-love and to give people a digital sanctuary for their selfies.

The idea for the group came after Kauffman had a panic attack at a roller skating rink during her Emerson years. Kaufman wanted a space to post a completely honest portrayal of herself, something she said other social media doesn’t offer.

She invited around 150 people immediately, who in turn invited their own circle of friends. Kenzy Peach, a junior political communication and performing arts major, was one of the early members.

“I’m a firm supporter of selfie culture because I think it encourages people to make art more than usual,” Peach said. “When you’re your own subject, anytime and any place can turn into art.”

The group currently has 1,910 members. Kaufman estimates that she and the other administrators add about 50 new members a day. She believes the group is made up of 40 to 50 percent Emerson students and alumni.

“A lot of people treat it almost like a diary,” Kaufman said. “It gives people empowerment and control.”

The group is specifically targeted towards millennials, those 20-somethings oft-ridiculed by older generations about their vanity. Some members, like Shvartsman, see “mirror selfies” as a way to subvert the stereotype commonly associated with their age group. To her and others in the group, vanity is a tool that can be used to boost self-esteem and enable self-expression.

“What’s so wrong about leaning into the millennial stereotype?” Shvartsman said.

The popularity of the group shows no sign of slowing down. Kaufman recently created an Instagram account to curate and showcase the best selfies from the page. It is also creating connections. Shvartsman even met a girl in Los Angeles who said she recognized her from Shvartsman’s posts on the page.

By keeping the rules simple (mirror selfies only) and the community supportive, the group allows people to express themselves without fear or embarrassment. Virtually every selfie posted on the page draws some of Facebook’s “love” and “wow” reactions as well as encouraging and friendly comments from other group members. Most of the administrators’ work is scouring the page and deleting fake accounts and selfies that weren’t taken in a mirror.

To Kaufman, who usually refrains from posting her own selfies, the joy of the group now stems from sitting back and watching people share their personalities on her platform.

“I’m glad I can bear witness to all these people expressing themselves,” She said. “There’s so much power specifically in a mirror selfie.”