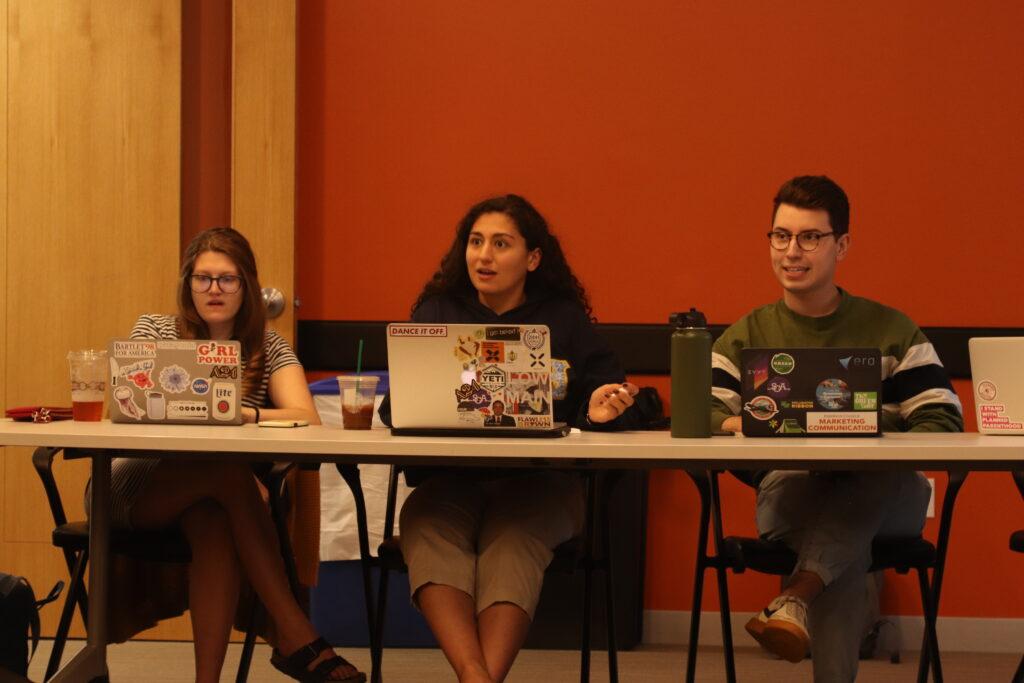 The joint session meeting, which comes in advance of the Financial Advisory Board’s scheduled Thursday vote on the proposal, featured an intense 25-minute discussion regarding the policy.

Semple’s proposal caused intense scrutiny in the weeks after its introduction at the beginning of the semester, as it would remove a key source of funding for multiple student organizations. The proposal states that if an organization receives funding through the appeals process they cannot charge any sort of participation fee.

The EVVYs raises more than any other organization from participation fees—around $25,000—according to the organization’s Executive Technical Producer Leo Duch Clerici.

Each year, the EVVYs appeal for around $30,000 to put on the annual awards show. Should Semple’s policy be enacted, the organization would be forced to appeal for approximately $55,000.

Semple said she could not guarantee that SGA would fully compensate any organization losing money from her proposal.

Other organizations that could lose funding as a result of the policy include the Musical Theater Society, The Emerson Green Gala, EBONI, and Ribbons on the Runway.

Presentations from both Semple and Executive Vice President Will Palauskas headlined Tuesday’s meeting. Semple advocated for the policy with her presentation while Palauskas outlined the dangers of the proposal

“I think that this policy blindsides organizations that depend on us,” Palauskas said. “They rely on us to provide them that funding and give them those appeals that they need to put on these great, sometimes nationally recognized events.”

Following Palauskas’ presentation, members began questioning some of the specifics of the policy, including a line of questions regarding whether or not SGA could afford to fully fund organizations after the loss of ticket sales.

Members also questioned whether the new policy would still leave the leftover $25,000 that SGA used last year to create a scholarship for students with financial need. It is unclear whether or not they would be able to do so.

At the conclusion of the meeting, Semple noted in an interview with The Beacon that the proposal was subject to change during Thursday’s FAB meeting—highlighting the potential of a cap on ticket prices instead of a total ban on admission fees.

When asked about her confidence in the proposal’s ability to pass, Semple remained optimistic.

“Fundamentally, the issue is that when students pay a student participant participation fee, that is their fee to participate in campus events,” the executive treasurer said. “I think that everybody on FAB fundamentally agrees that we should make it as free and as, as accessible as possible.”

Raz Moayed, SGA’s executive president, told The Beacon that while she disagrees with the contents of the proposal, it has generated an important conversation within the organization.

“I think that a really big issue has been brought up with this policy change, and it’s simply that students want to be a part of events—and that’s so valid,” Moayed said. “I think the conversation just needs to change into how can we get more students to join events without creating a policy for a year that students can’t really play with and just get bombarded into.”

Thursday’s vote is expected to be decided by three of the five voting members of FAB, with Semple serving as a tiebreaker.