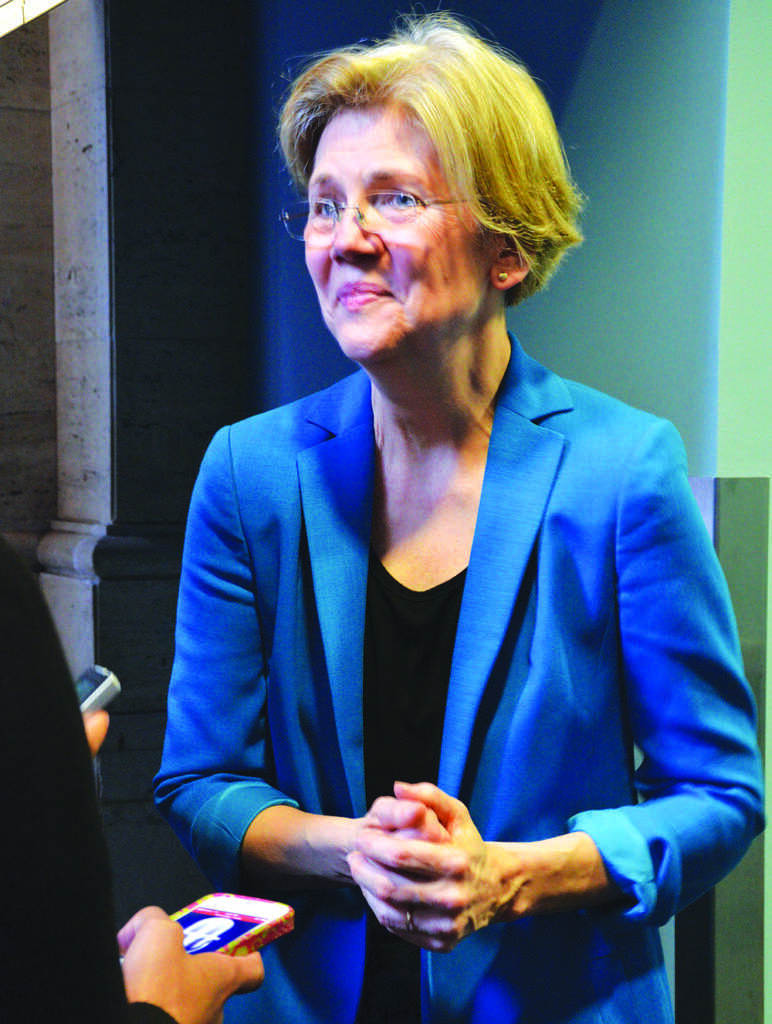 Dressed in all black with an electric blue blazer, Warren was animated as she spoke to the crowd of 100 in the Bill Bordy Theater.

Emerson Democrats secretary Abby Ledoux said she, and many of her fellow club members, were pleased to hear Warren speak about her political platform.

“It’s super refreshing to see,” said the junior journalism major. “I think that she is one of the few politicians that will even stand up for Main Street against Wall Street and fight for the falling middle class.”

Last month Emerson Democrats were denied funding by the Student Government Association for the convention. Ledoux said the group used funds from the College Democrats of Mass. and various outside fundraisers to finance the conference.

The convention was a weekend long event drawing 156 students from 22 colleges to Emerson to engage in the politics of the state. During her keynote speech, Warren explained to students why she decided to run for Senate.

“Ultimately I am in this race because I believe this country has turned in the wrong direction,” said Warren. “This is no longer the country I grew up in. The only way we get it back is if the people in this room are the ones who take it back.”

She also shared the emotional experience of seeking the Senate’s approval of a proposal, focusing heavily on a period of three weeks when she and her colleagues felt their project may be killed by the senate.

Ledoux said Warren likely was fearful of this because of the large Republican presence in the Senate.

“During that time we blogged, emailed, wrote letters, and made phone calls,” Warren said. “We had a clear ask — we just want a vote. You can vote for banks or for families, but you’ve got to give us a public vote.”

Warren said she was recounting her story to make students aware of the importance of fighting those in power who have control over finances.

She finished her speech by appealing to students in the audience and called for help in the campaign process.

“I want to go to Washington so I can have your back, and to do that, I you need to have my back,” she said.

After Warren left the podium at the front of the theater, students rushed to shake her hand and snap cell phone photographs. Many students wore campaign T-shirts with the slogan “the best candidate money can’t buy.”

Among these students was Emerson Democrat Blair Li, a sophomore visual and media arts major.

“She’s an amazing woman,” Li said. “She represents exactly what the democrat believes in. She is us in an nutshell, the complete polar opposite of those guys on Wall Street. I think that she is amazing and very brave for what she stands for.”

In an interview with Beacon after the event, Warren said she thought the crowd was energetic and receptive.

“I want them to knock on doors. The student vote is so crucial,” she said. “Their heart in this campaign makes it run.”