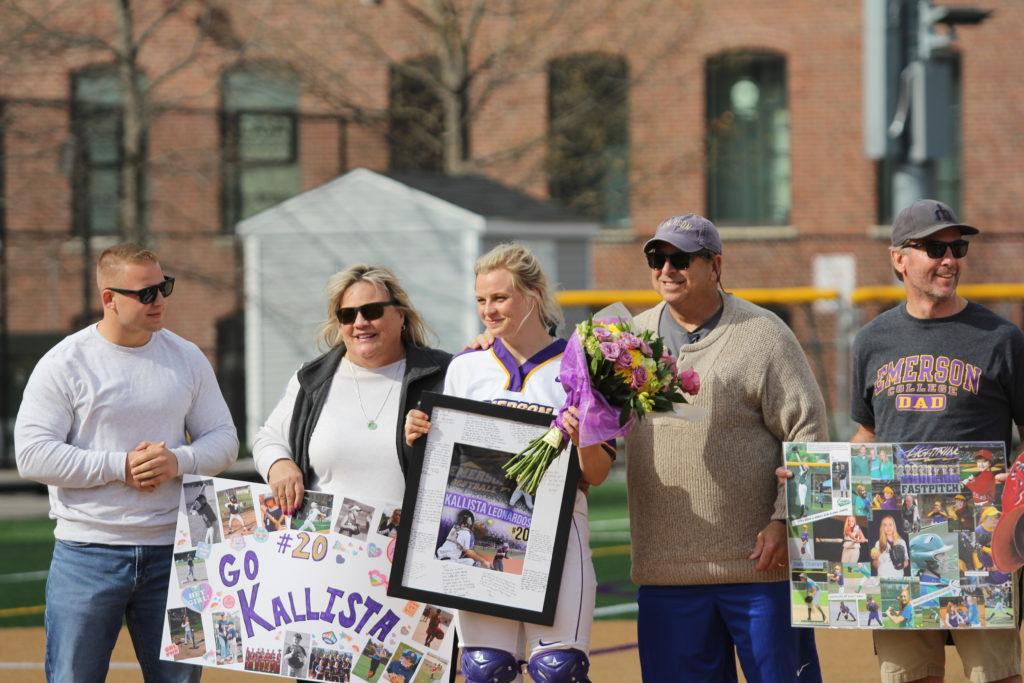 “I’ll be entering [the draft] and hopefully be playing professional softball,” Leonardos said. “I chose it because you get the rest of your life to work so why not play softball a little bit longer and have some fun.”

The softball team played Clark University in a doubleheader on Friday afternoon and won both games.

The Lions edged out Clark 1-0 in the first game.

Both teams remained scoreless after six innings, but sophomore infielder Lindsey Lowe and freshman outfielder Mallory Shofi delivered game-saving defensive plays. In the third inning, Lowe caught a hard line drive towards second base to force an out, and in the fourth inning, Shofi made a hard-sliding catch in shallow center field to prevent a base hit.

The Lions scored their winning run in the seventh inning when junior shortstop Micaela Dix led with a deep double before Shofi bunted to bring Dix to third base. Dix then stole home and scored the winning run after Clark’s senior pitcher Taylor Erickson threw a pitch over Dix’s head.

“Micaela [Dix] led off that inning with a hit and advanced to second. We laid out a sacrifice bunt and so we had first and third with nobody out,” head coach Phil McElroy said in a post-game interview. “I thought it was just a matter of time before we got to that pitcher, but it certainly took a little bit longer than we wanted it to. We were fortunate for the ball to hit the plate and bounce over the catcher.”

Sophomore pitcher Neely Eddleston started for the Lions and pitched a shutout game. She struck out four batters and allowed six hits. Dix led the team with two doubles in the first game.

After the end of the first game, the team honored its three seniors—Leonardos, Alena Jones, and Marisa DeFranco—with flowers and gifts from the home crowd while Nick Pezillo, the Director of Athletic Communication, announced their career statistics and future plans.

McElroy said all three seniors and their dedication to the team impressed him.

“There’s no group more important than seniors,” McElroy said. “This is a huge time commitment and the fact that we have committed players that will stick around and do that for four years, it’s unbelievable.”

As she prepares to graduate, Jones advised the returning players to continue working hard.

“My advice is just push through it, work through the adversity,” Jones said in a post-game interview. “It’s not easy playing four years at Emerson especially because you have to balance school and extra activities. So I just want to see them stick through it for all four years and you’ll turn out good.”

In the second game, the Lions defeated Clark 4-1.

In the third inning, Dix led off with a single before freshman infielder Morgan Mitchell was hit by a pitch to load up first and second base with just one out. DeFranco drove both Dix and Mitchell home after Clark’s outfielders failed to catch the flyball in center field.

In the fifth inning, the Lions loaded the bases before Clark’s freshman pitcher Sarah Woods hit freshman infielder Lexi Semanchik with a pitch, and walked in a run to make it 3-0 for the Lions.

Clark earned one run back in the sixth inning to bring the game to 3-1 after Clark sophomore outfielder J.C. Urella’s home run to center field. The Lions scored another run but freshman outfielder Calli Pratt injured her foot when she scored.

McElroy said the two wins are crucial for the team’s hopes for making the playoffs.

“We’re in the mix for two spots with three teams and one of the teams that we’re in the mix with won both of their games yesterday, so this was very important,” McElroy said. “We still have a long way to go. We’ve got a doubleheader against Wheaton and that will probably determine whether or not we get to participate in the playoffs.”

The Lions will play their next doubleheader against Wheaton College at home. The exact time and date are yet to be determined.