Senior Spotlight: Willinger reminisces about career ahead of uncertain season 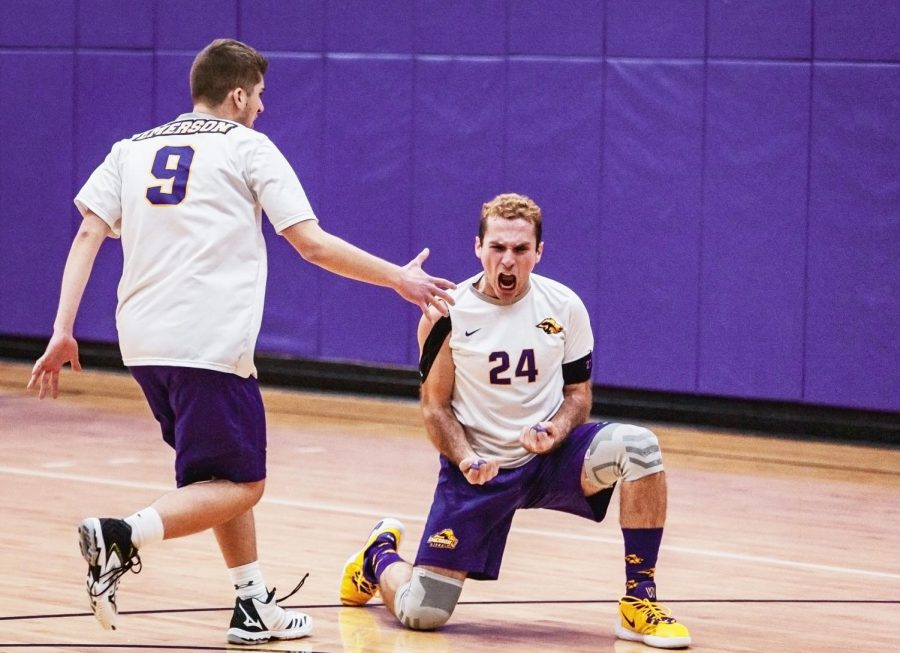 Sam Willinger (right) celebrates after scoring a point for the Lions last season.

In his past three seasons as a Lion, senior men’s volleyball right side hitter Sam Willinger  worked diligently to change the team’s image and culture. He has managed to help create a more inclusive environment and welcoming team that shows more promise now than when he arrived.

Willinger, a film production major and journalism minor, began his career as a Lion in 2017. According to teammates, it was clear he was one of the team’s leaders and unifying forces—he took on the role of team captain during his junior year. Despite not starting off as the best player on the court when he started, he said, Willinger has always been in love with the sport.

“I was never really the best player, but I really loved the sport and I love the fact that it was more of a mental game most of the time,” Willinger said in an interview. “I was still able to get points when my team was down and get us back in.”

Willinger played 61 games in three seasons at Emerson. Last season, he recorded a total of 39 blocks and 179 kills and was named to the GNAC All-Academic Team. The Golden Beach, Florida native began playing volleyball during his freshman year of high school, where he competed all four years with the school and on club teams. He also practiced Brazilian Jiu Jitsu.

The volleyball team plays in the Greater Northeast Athletic Conference, which has not yet suspended competition for the 2020-21 winter season. This has left the team with uncertainty on whether or not there will be a season.

Willinger, who proved to be one of the most audible players on the court through his celebrations and cheers, said he played each game like it was his last. As his senior season approaches, this may be the unfortunate reality.

“I want to make sure that whenever somebody steps out on that court, they appreciate every second of it,” Willinger said. “I’ve definitely done that, and I will continue to do that every opportunity I get.”

Junior setter Josh Elliot recalls a surprising moment where Willinger showed his colors as captain, during a 3-0 loss to the Massachusetts Institute of Technology in January of last year.

“We were enjoying the game, but that year we didn’t have a lot of talent and they destroyed us,” Elliot said in an interview. “He said to us, ‘That game was better than any game we played last year where we won. You guys put your heart into it. We’re not going to beat everyone, but if we play like that every game, where we enjoy it, put ourselves out there, and we are able to actually draw on the crowd, that’s what we want to do.’”

Willinger said that game is one of his most memorable moments as a Lion.

“For the first time that season, we were playing really well as a team against a team that was significantly better than us,” Willinger said. “By the end of it, they were really trying to put their best players back in and just couldn’t get stuff going. That was a pretty memorable moment for me to kind of be the first time as a captain leading the team against a pretty formidable opponent and still putting up a fight.”

Willinger prioritizes team morale during matches. Even when down two sets to none and unlikely to win, he is always there to congratulate his teammates if they score.

“There was only one senior, and he took out the role of being a junior that also was the captain,” Chen said in an interview. “Seeing him step into that role from meeting him in his sophomore year, it was a huge difference to me. Not only was he focusing more on the logistical aspect of the team but also working on motivating every individual member.”

Beyond leading the Lions on the court, Chen said Willinger also makes sure the team is always on top of its responsibilities off the court.

“Everyone can count on him, be it something as simple as remembering to bring down the camera bag to record our games, getting the laundry to the coach, as important as setting up practice times with the coach, or basically scheduling everything for the entire team,” Chen said.

Elliot said Willinger was instrumental in building team culture, which he did by maintaining relationships with players on the team outside of games and practices.

“He’s a very good people’s captain,” Elliot said. “He’s really good at keeping everyone together, and he just makes it a point to be like, ‘Look, we’re all going to try to get lunch together.’ We have a really good team culture, and like everyone really likes each other.”

His desire to connect with each individual player, Willinger said, stems from his appreciation for the opportunity to play at college level.

“I really do appreciate every second I got to be on here with these people,” Willinger said. “I’ve learned so much from each individual person. They lit that fire again for me to play with people that really love playing and love being around the sport. They were doing it because they want to be here.”

Away from volleyball, Willinger is president of Emerson’s Student Athlete Advisory Council and has been enhancing other athletic skills. While quarantining over the summer, Willinger ran 5K races, bettered his basketball skills, and began producing a new YouTube show, The Upbeat. Shooting from his parents’ bedroom with a makeshift teleprompter, Willinger started recording episodes every two weeks.

Although the season is cancelled, senior winter sports student athletes have the opportunity to receive an additional year of eligibility and return next season. However, Willinger said this season will be his last as a Lion.

“I’d love to play another year,” Willinger said. “But, I’m not sure I can hang around for so much longer. I just gotta take that first step, and not in a fun way, to end it. But it’s definitely a way to make a clean break.”

Willinger also said he is focused on graduation and life after college.

“I’m already starting to work on looking at internships and working my way into the area which I want to be doing most of my work in,” Willinger said.

All in all, the senior is grateful for the opportunities he’s received at Emerson to grow as an individual.

“Emerson College has given me the opportunity to figure out who I am, what I want to be, and kind of just decide that some of the stuff that I really thought was super important isn’t,” Willinger said. “I need to focus on and do what I want to do. At the end of the day, it is going to be so much more important than what other people think about what I’m doing.”