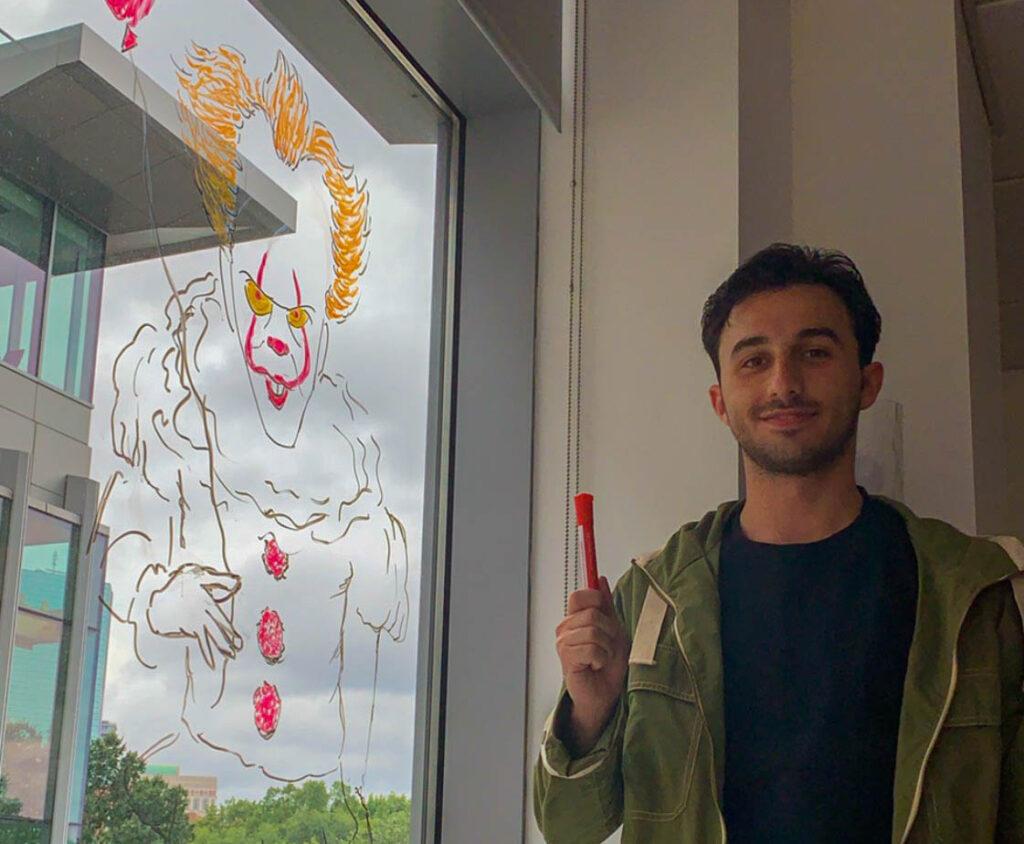 Senior Joe Scardilli grew up drawing—now he works for the SEAL office sketching memes on the new walls of 172 Tremont St. Courtesy of Joe Scardilli

The faint scent of dry erase markers constantly lingers in the rooms of 172 Tremont St. ever since the college hired senior comedic arts major Joe Scardilli to create pop culture and meme illustrations on the building’s windows and white board walls.

Jason Meier, director of student engagement and leadership, recruited Scardilli to draw illustrations of his choice in the many different rooms and floors of 172 Tremont. Scardilli’s paid job entails drawing for five hours a week between classes.

Meier said he found out about Scardilli’s artwork through Facebook, when Scardilli posted his very first white board drawing during the summer.

“I was visiting Boston when my buddy took me to see 172 Tremont St., and we found the white board walls, so I drew the Spider-Man villain ‘the boys’ meme,” Scardilli said. “When Jason Meier reached out to me, I immediately said yes because I never knew it would be an option.”

Meier said the main focus for 172 Tremont St. was to make the space collaborative and unique.

“One thing we kept coming back to was the ability to brainstorm on any surface of this space,” he said. “From there it dawned on us, ‘How do people know that they can use these walls?’”

Meier saw Scardilli as the model of showing what students can do with these spaces.

“Joe is someone I know and trust, and I also love his sense of humor, so I knew he was going to do an outstanding job,” Meier said.

Meier said Scardilli’s job description is to be creative and to utilize all the spaces.

“There is a running joke about Joe’s job title, which is ‘making memes for angsty teens,’ but of course that’s not going to fly in the professional world,” Meier said. “The unofficial job title is ‘marketing specialties for SEAL.’”

Scardilli said he grew up with two artistic parents that influenced him to start drawing.

“I grew up drawing and I took art classes for a year,” he said. “I always loved cartoons a lot and making cartoons.”

Scardilli started creating white board art in high school. He said he drew on his teacher’s white boards between classes.

“I have found strategies and techniques to make the process easier, but it is the most difficult medium that I have worked in,” Scardilli said. “Part of that difficulty is because even if you get everything just right and spend an hour on just one drawing, in a week it’s going to be gone.”

All of Scardilli’s drawings are pop culture references and memes. The internet and his friends are his main sources for finding popular memes that are circulating through social media. He said he wants to make sure that the students walking by will recognize his artwork.

“Any pop culture references that I think that people would be aware of … especially here at Emerson, people will see it and appreciate it,” Scardilli said.

“I saw that his profile picture was of Charlie Kelly from It’s Always Sunny In Philadelphia and I really like that show, so we started before orientation,” Leibas said.

She said that after she followed Scardilli on social media, she found out that he had an interest in drawing.

“When we would hang out Joe would just randomly draw cool things on paper,” Leibas said.

Leibas said that Scardilli has major talent and that the art he creates on the white board walls of 172 Tremont St. are inspiring.

“Joe is incredibly talented, and he is definitely going to collaborate his art into his career in the future,” Leibas said.

Scardilli said that his white board art is just a hobby for now, but he would like to have the opportunity to incorporate this skill into his career of writing and acting after graduation.

He hopes his drawings will make the white board walls more interesting for students to look at. He said he also wants to make a connection with his audience and has been writing personal questions on the white boards so students can answer them.

“I really want this to become a communal thing instead of just me drawing and someone seeing it and ignoring it or erasing it,” he said.

Scardilli will graduate at the end of the fall semester. Before he graduates, he said he wants to find someone who is willing to continue the white board art.

“I hope to find someone not necessarily who has the same interest as me, but whois similarly passionate about putting things that they think will brighten people’s day when they see it,” he said.