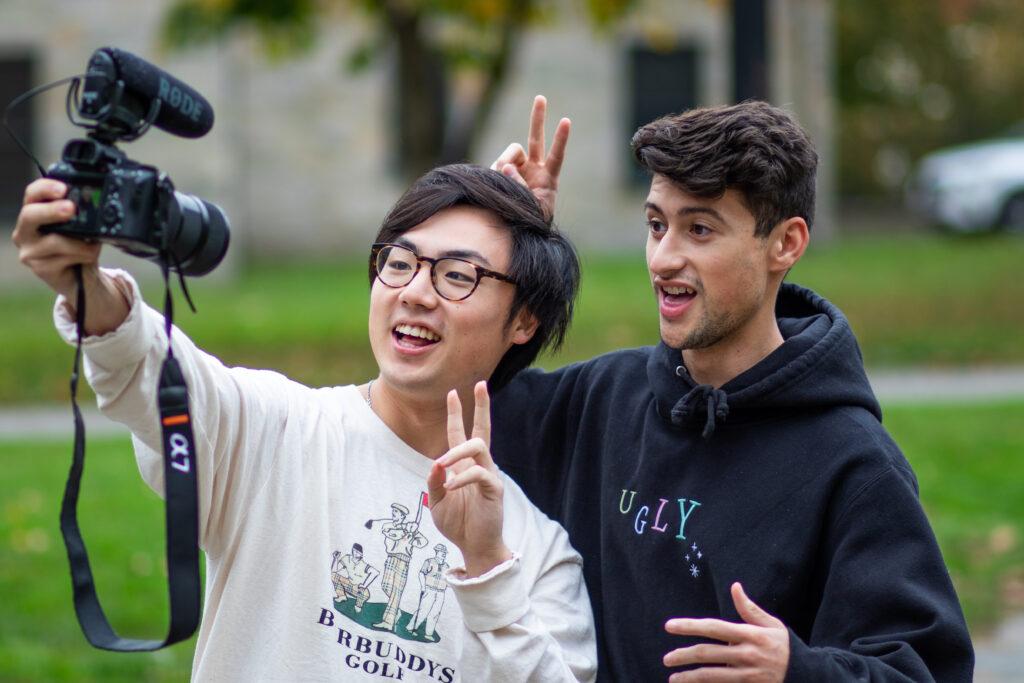 When senior Eliot Lee was in his freshman year at Emerson, a high school friend of his reached out to let him know about an opportunity to work as a video editor for a YouTube channel. After a roughly month-long trial period, YouTuber Kyra Sivertson hired Lee, and he began editing videos for her family’s 1.5 million-subscriber channel, OKbaby.

Lee, now a senior visual and media arts major at Emerson, attended high school with Sivertson and her partner Òscar Morales, the parents behind the OKbaby YouTube channel. The videos follow Sivertson, Morales, and their three children, Levi, Alaya, and Averie, through their everyday life and adventures. Lee worked continuously with the channel filming and editing the videos, starting in the summer following his freshman year. As the family is based in Utah, Lee works with them solely as an editor during the school year.

When his availability changed in summer 2019, Lee recommended senior VMA major Gabriel Araujo as an additional editor and videographer for the family. Morales and Sivertson ended up working with both students this past summer.

Lee and Araujo accompanied the family on excursions and trips, such as traveling to Idaho and Montana to film the family’s adventures. The production is simple, Lee said, as the purpose of the channel is to capture the essence of the family.

“The way that they describe their channel, it’s like they’re home videos that they’re broadcasting to millions of people—they want to make it as personal as possible,” Lee said in an interview. “For the most part, they wanted something they can look back on, memory-wise.”

Araujo and Lee have become friends with the family, which Lee said created a unique work dynamic. Despite the comfortable environment, both students agreed that working with the channel improved their work ethic.

Araujo said his time working with OKbaby expanded his capability to work all day and remain motivated. For Lee, the work with OKbaby has given him an understanding of the demands of work outside of a classroom setting.

“[The job] really gave me some sort of real-world experience in terms of how to deal with other people that are paying you, and to keep them satisfied while also keeping yourself sane,” Lee said. “Filming a video and editing it every single day does get mentally draining, and so I think I did grow from that in that respect.”

Araujo and Lee said working with OKbaby in the social media realm solidified their vision of their future.

“I actually came to college kind of hoping that I would get more into YouTube stuff, but then I slowly grew more into wanting to do traditional Hollywood long-form narratives,” Araujo said in an interview. “Then working for [OKbaby] was fun, but I can’t really imagine doing that full time—smaller-form content on a regular basis like that. It’s a good summer job, but end-goal-wise, it’s not what I want.”

While the work with OKbaby might have pushed Araujo onto the trajectory for Hollywood, it strengthened Lee’s push off from a Hollywood focus and into the realm of social media.

“When I first came to Emerson, I definitely wanted to go into Hollywood and the traditional film industry, but after working for [OKbaby], I’ve kind of shifted my path,” Lee said. “I kind of want to go more into making videos for advertisers or production companies that do stuff online.”

Sivertson said Lee and Araujo had very different ways of filming and editing, which allowed variation in their content.

After working with people who live prominent lives on social media, Lee and Araujosaid being able to see the channel creators’ human sides made an industry that once seemed daunting to the two of them become more approachable.

“That was one thing that shocked me, how normal [Sivertson and Morales] are—they have kids that they take care of and they do regular parent things,” Lee said. “But they just happen to document it on YouTube and have an audience.”

Sivertson said she has enjoyed working with Lee and Araujo. On top of relationships she has made with the two, she said watching them have fun and enjoy themselves while working with them has made filming more enjoyable for her as well. She finds having college students edit for them has led to more creativity in their videos.

“A lot of kids in college, like Eliot [Lee] and Gabe [Araujo], are very open to new ideas and trying new things,” Sivertson said in a phone interview from Utah. “And I think that is also something that contributed to the videos being so awesome, but also just fun to film.”

Lee said he was extremely appreciative of all the opportunities Morales and Sivertson have given him over the past three years.

“The fact that I’m able to do something related to what I want to do with my career, as a college student, and be able to not worry about finances,” Lee said. “I truly feel grateful and blessed, and it’s all because of them.”