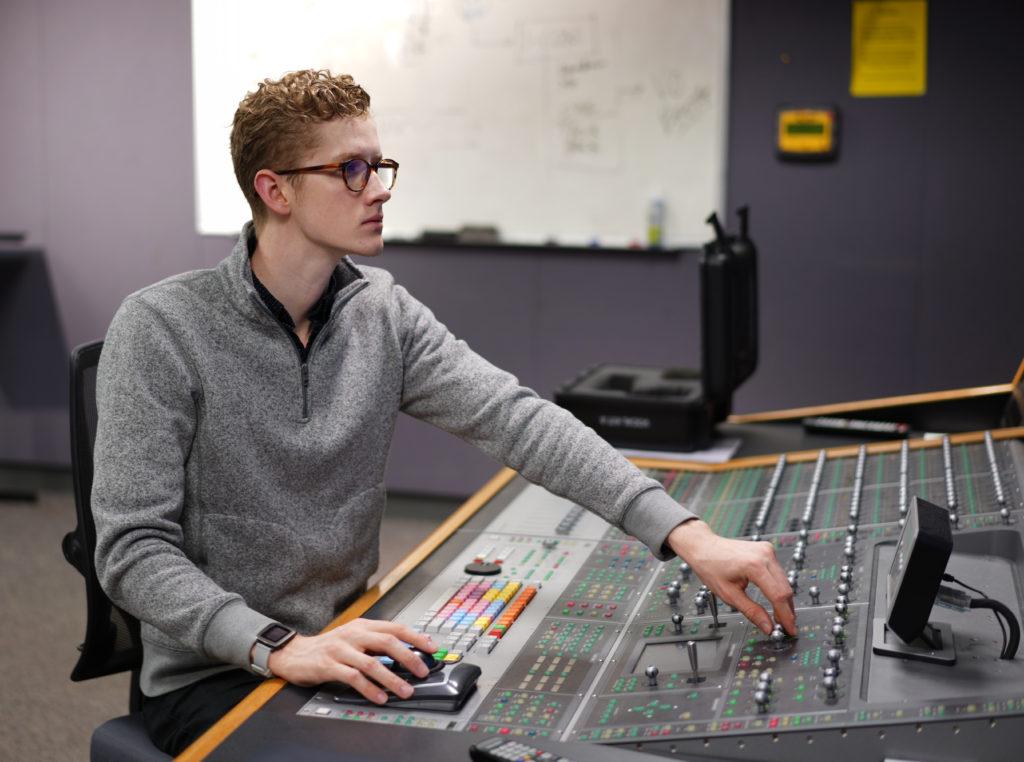 Senior Ian Mandt will upload the second episode of his podcast, 'We Demand,' on April 5. Photo by Xinyi Tu - Beacon Correspondent

Almost halfway through his Podcasts for Change class last semester, senior Ian Mandt asked himself what kind of change he really wanted to make through this medium.

Several semesters earlier, Mandt participated in the 2017 campus protest organized by students of color, even though he did not yet fully understand how institutional racism manifested on campus.

On April 28, 2015, student advocacy group Protesting Oppression With Educational Reform initiated a student walkout at the last faculty assembly of the 2014–15 school year. POWER demanded the college strengthen the cultural competency and racial conversations at Emerson.

In fall 2017, POWER led more than 300 Emerson students in a protest that reiterated their original demands and dissatisfaction with the administration. The organization created a Change.org petition with a list of needs all starting with “We Demand …” that more than 2,400 people supported. POWER sent the petition and list of demands to President M. Lee Pelton, the Board of Trustees, Provost Michaele Whelan, and the faculty assembly.

A year after the 2017 protest, in addition to a 60-minute podcast Mandt created for his class, he began producing more episodes to make it a series called “We Demand.” The podcast features conversations with participants and organizers of the 2017 protest about their experience as minorities at Emerson.

Mandt said the 2017 POWER protest was a transformative experience for him. He said he wishes to open his audience’s eyes in the same way his eyes were opened when hearing students’ personal stories.

“[This series is] for people like me a year ago who didn’t understand and didn’t see why the protest was necessary, for people who have those lingering questions, and for people who may doubt some of what we said in the protest,” Mandt said.

Mandt invited and interviewed eight people on his podcast, including five protest organizers and three participants from the 2017 protest, to share their experience with racial discrimination and micro-aggressions at Emerson. Mandt said he wants the series to serve as an oral history of the protest.

Mandt released the first episode, “Orientation,” on March 22 on various audio platforms, including Spotify, Apple Podcasts, and Listen Notes. At least 30 people listen a week, according to the audience reports from Spotify and iTunes.

In the first episode, Mandt weaves different voices together and contrasts students’ expectations of Emerson and their first impressions when they arrived to campus as people of color. He said that, instead of having one individual sharing their story in each episode, he intentionally combines the guests’ different narratives to let them all tell their collective story.

“Moving forward, my voice will be largely absent. Your tour guides will be taking the reins from here. At moments I may try to provide important context, but this is their story to tell,” Mandt says  in the first episode before his guests start to share their stories.

Jonas Spencer, the president of Emerson’s Black Organization with Natural Interest and one of the people interviewed in the podcast series, said he took the podcasting class with Mandt and thinks his podcast shows the struggles people of color deal with on a daily basis.

“I think it puts a good microscope on it and makes you think about the ways in which the school, or just any institution, carries out racism without it being out there for everybody to see,” Spencer said. “I think a lot of the stories on this podcast bring up ways in which people are uncomfortable based on their race.”

In the first episode, Spencer talks about his beat reporting class, a mandatory course in the old journalism curriculum, and how students were assigned a specific neighborhood to cover. When his class was assigned to cover Dorchester, a predominantly black community, his peers were either upset or reluctant to attend the course.

Spencer said podcasts capture the emotion of someone’s voice while allowing people to listen to the stories anywhere. He said he intends to show his support to other students of color by sharing his story.

“It’s something for the administration as well and letting them know that, ‘Look, things need to change,’” Spencer said. “We’re going to keep pushing until you all make the change that we want and what we pay for every single year.”

Mandt said the podcast is about the experiences of people of color on campus. As a white male, Mandt decided to give his guests the ownership of this story by not narrating their experiences for them.

Despite Mandt’s consciousness of his identity, he said it is important to spread the message from people of color because racism is still an ongoing issue.

“If this series doesn’t exist, then we risk running into the issue of people coming into the school not knowing that this legacy exists, and not being able to pick up where other people left off and being forced to start over,” Mandt said.

The second episode will be out on April 5, according to Mandt.

Former POWER co-chair Lucie Pereira ‘19 was featured in the podcast. She shared the podcast trailer on her Facebook page and said she is grateful for Mandt’s work.

“College communities cycle through members every four years, which means that institutional memory seems to reset with each new batch of students who enter, unaware of the shoulders they stand on,” Pereira said in the post on Facebook. “This cycle enables those in power to avoid making change, as they simply stall progress and wait for troublemakers like yours truly to burn out and graduate.”

Junior Raz Moayed, who spoke at the 2017 protest at Paramount Center and in Mandt’s podcast, said having this kind of journalistic work about a campus protest organized by people of color enhances the notion of representation.

“[The podcast] keeps the momentum going. It helps everyone digest the fact that the POWER protest is not just this one event,” Moayed said in a phone interview. “It is these students’ lives, their names and faces, and they are not just speakers or organizers, they are in your classes next to you, and I think that’s what is really important about what [Mandt] is doing.”

Graduating this semester, Mandt said the fact that there were two protests in two years shows the importance of understanding and resolving the issues. He said he wishes to continue the important work done by other student protesters so that there is no need for a third protest to happen in the future.

“For me, it’s important to make sure that everyone who goes to this school after me and after the people who led this protest knows the legacy that they left behind,” Mandt said. “Otherwise, a protest is going to continue to happen every two years.”

Correction, April 5: Mandt released the second episode of his podcast on April 5. A previous version of this article stated it was his third, including the trailer he released prior to the first episode. The number has been changed for clarity.