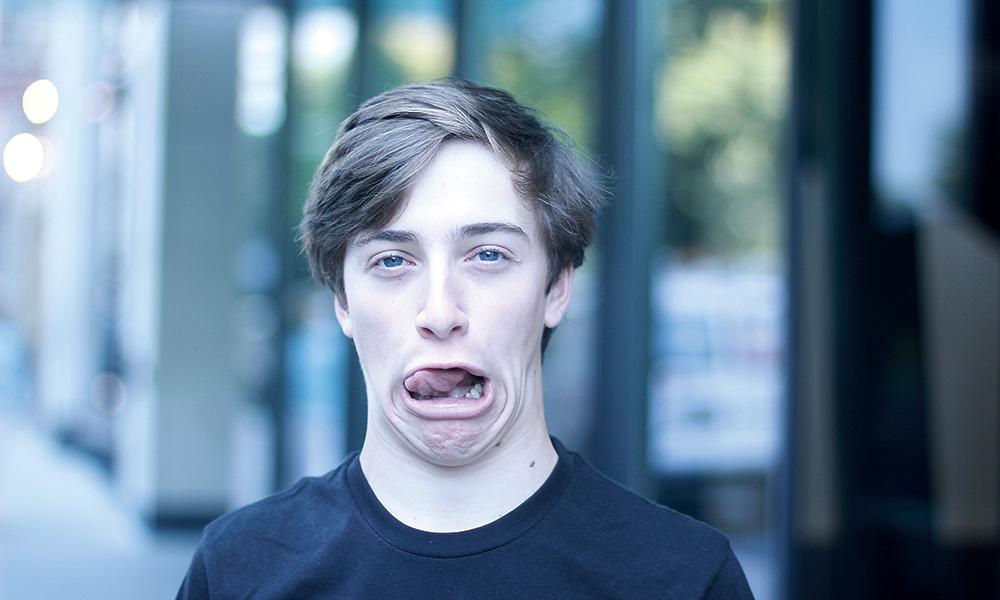 Emerson juniors Charlie Fay and Jordan Perry don’t have too much to say about their comedic experiences, at least not right away. What they really wanted to talk more about was their new apartment by Northeastern — namely, the sad state it was in.

In fact, they seemed uncomfortable at first, meeting with a reporter surrounded by dirt-caked walls and bad lighting, but they swore the squalor was not present when they signed the lease back in May. So there’s that.

On the upside, at least they’ve gotten used to living with a fellow comedian, a point of contention earlier in their Emerson careers.

“It’s great and it’s hell ‘cause when I’m around comedians, I always feel pressured to make jokes ‘cause it’s expected,” said Fay, a visual and media arts major. “I like to separate those parts of my life, and make jokes on my own will.”

As interesting as that dynamic was, the real point of the conversation was the goings-on at a place called Grandma’s Basement. Located in the shadow of Fenway Park and in the bottom of Howard Johnson Hotel inside a Chinese restaurant, as Fay said, the infamous Grandma’s Basement is an open mic venue that brings out a diverse crowd of aspiring comics.

“Everyone from the drunk sad types, to tough Boston guys, to nerdy college kids, to real comics show up there,” said Perry, a visual and media arts major. “I’ve got some great stories.”

Like for instance, the time an old Irish guy went up at the end of the night and read a story he had written throughout the night, or the time another guy drunkedly passed out on stage in the middle of his set. Everything about these stories, down to the dark, dank atmosphere of the venue, serves to highlight how doing stand-up at Grandma’s, or in the “real world” in general, is a lot different than Emerson showcases.

“Emerson is one type of audience, and you know one type of humor generally tends to work,” said Perry. “With open-mics you have to rely on more universal comedic ideas that can connect with anybody, not just your friends.”

Fay agreed: one can’t make Emerson-centric, or even college-centric jokes for that matter at open mics and expect to get laughs. People in the audience at places like Grandma’s Basement, who are usually other comics, just can’t relate.

Events like Inside Joke, a recurring Emerson stand-up showcase that many Emerson comics frequent, can sometimes put you in that mindset.

“I did one of my first sets at Inside Joke and I did really well, but Emerson can be sort of a trap in that sense,” said Fay. “Cause I then did a similar set at an open mic at this comedy club, Nick’s Comedy Stop, and the jokes just didn’t hit nearly as hard.”

So, what is their comedy like? Both admit to having obvious contemporary influences like Louis C.K. and Brian Regan. Fay in particular cites a basis in absurdity he learned from years of watching cartoons like SpongeBob Squarepants as a kid.

It wasn’t easy to get those answers, though. To Perry and Fay, being approached about their comedic triumphs is still a weird reality for them. Neither had any formal comedic work before settling into school here two years ago, and only Perry had any acting experience. But, nowadays Perry and Fay are known throughout Emerson for all of their comedic ventures. To those who don’t follow the Emerson comedy scene, Perry and Fay are president and vice president respectively of popular comedy troupe Jimmy’s Traveling All Stars.

They agree that working in two different forms of comedy certainly helps strengthen their comedic voices, and their stand-up clearly informs their sketches. Therefore, it isn’t shocking that they stressed the importance of performing outside of the “Emerson bubble” with Jimmy’s.

“With Jimmy’s we’ve performed at Boston University, Suffolk, Tufts, and at a comedy festival at Skidmore College in New York,” said Perry. “Working alongside other comedians at different schools definitely helps bridge your perspective, for sure.”

Of course, Perry and Fay didn’t just waltz into the Boston open-mic scene on their own—some upperclassmen friends, who have since graduated from Emerson—originally dragged them out back in their freshman year. They’re eager and willing to do the same for up-and-coming Emerson comedians.

“I would love to be someone who opens up a comedian to that world,” said Fay. “Plus it’s always fun to be there for someone’s first time on stage.”