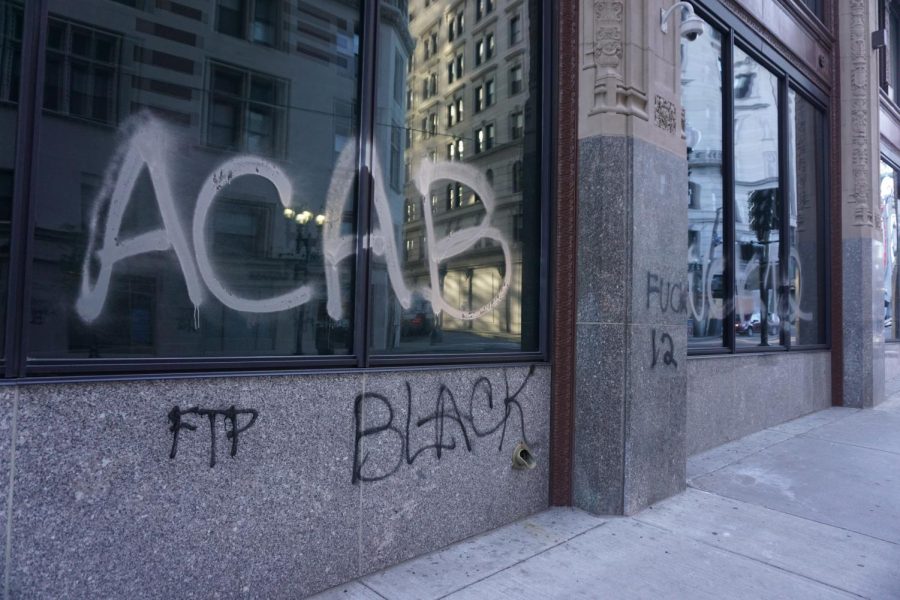 Protesters vandalized several of the college's building's including Little Building.

Seven Emerson buildings were vandalized and had windows smashed after protests erupted throughout Boston Sunday night, following the killing of George Floyd by a white police officer in Minneapolis, according to a college official.

Emerson College Police Department Chief Robert Smith told the Beacon in an email that the Little Building, Print and Copy Center, Barnes & Noble, Dining Center, Piano Row, 172 Tremont, and Media Art Gallery were all damaged in the protests that turned downtown Boston into a battleground and resulted in many other vandalized buildings around campus. No ECPD officers or members of the Emerson community were injured during the protests and none of the college’s buildings were breached by protestors.

Little Building, the Media Art Gallery, and 172 Tremont were all graffitied by protestors. Graffiti on Little Building read “ACAB”, an acronym for “all cops are bastards”, and “Fuck 12”, slang for “fuck the police”.

The protests turned violent Sunday night when police fired tear gas and pepper spray into crowds after protestors threw rocks and bottles. The National Guard was called in by Governor Charlie Baker to assist Boston Police during the demonstrations, which began peacefully in Roxbury and ended at the statehouse.

A police cruiser was set on fire by protestors near the Park Street Church. Separately, several protestors were hit by another cruiser.

Several businesses downtown were looted during the protests including the Wild Duck, Men’s Warehouse, and the Walgreens on Boylston St.

President M. Lee Pelton could not be immediately reached for comment Monday. He has not publicly addressed Sunday night’s violence but did send an emotional email to the community Sunday evening detailing his reaction to the killing of Floyd and recalling instances in which he himself was harassed by police.

In an email to the community Monday, Vice President and Dean of Campus Life James Hoppe said that while many of the college’s buildings were damaged, it is only a small indicator of the long-lasting wounds inflicted upon black Americans.

“Hundreds of years of systemic oppression have brought America to this point,” Hoppe wrote.  “People protest for many reasons, pain, anger, and trauma among them. In some cases, violence is an eruption of people pushed beyond their limits.”