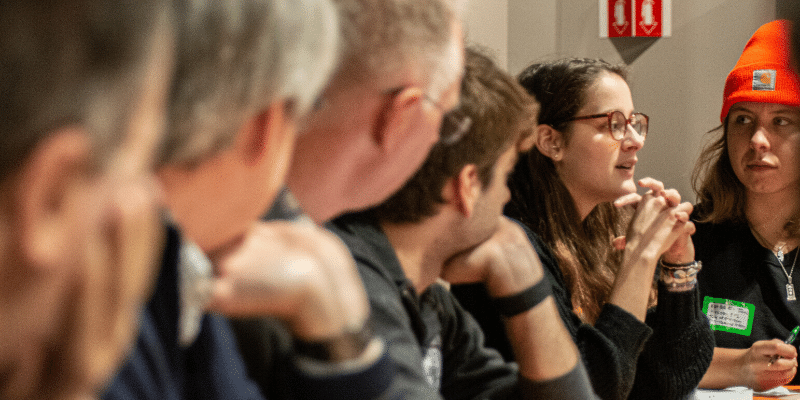 The town hall was structured similarly to last year’s with each department occupying a different space either in or around the Lion’s Den where discussions were held with the aid of facilitators who took notes and steered conversation. SGA provided departments specialized topics of discussion that had been developed in weeks prior with student input.

“We’ve been preparing for two months,” Executive Vice President Will Palauskas said in an interview. “But really, we’ve been working on this since the end of town hall last year.”

The liveliest discussion of the town hall shed light on complaints that have recently surfaced in the Performing Arts Department regarding the restructuring of the dance program this semester. Students told Performing Arts Department Chair Robert Colby that under the new changes, access to dance classes have become further restricted, as some have been unable to schedule the classes they need and others unable to retake classes that they’ve already taken.

Colby, who addressed each student’s concern individually, said while he believed the department shake-up had been for the best, he would be willing to work with any student in the department to ensure that they could take the classes they need.

While the room was visibly tense during the discussion regarding the dance program, faculty and students agreed that “intimacy training,” which prepares performers for intimate stage scenes, was a necessary addition to the curriculum.

The college’s recently announced merger with Marlboro College prompted discussion from students and faculty in the Institute for Liberal Arts and Interdisciplinary Studies, which is set to absorb Marlboro’s $30 million endowment next year.

“I can’t speak for everyone with an [Individually Designed Interdisciplinary Program], but the people that I know are really excited,” Honors Program Commissioner Daniella Baltazar said in an interview. “We can’t wait to welcome them to our community.”

However, an overwhelming concern from those in the institute was that of unanswered questions, an anxiety they share with the community of Marlboro.

Palauskas organized the town hall with the intent to create a discourse regarding issues at the college.

“I think conversations like these are fundamental to our educational system,” Palauskas said in an interview.  “In a modern education system, we all should have a stake in how our curriculum works and how it’s being taught.”

Generally, attendees of the event told The Beacon they felt the event was constructive, noting that the opportunity to engage in conversation was rewarding.

“I’ve taught at other universities, and I’m amazed just how open and accepting both sides are to hear the other’s issues, and that there’s a pervasive willingness to actually work together, especially on things that have been issues for a long time,” Performing Arts Professor Timothy Douglas said in an interview.

Palauskas said the town hall will serve as a stepping-off point for SGA’s work next semester.

“We’re going to take all that great dialogue that happened in these conversations and boil that down into the academic initiative, which comes out in December,” Palauskas said. “Then we’ll move forward from there and work on implementing the change that a lot of these students have asked for.”