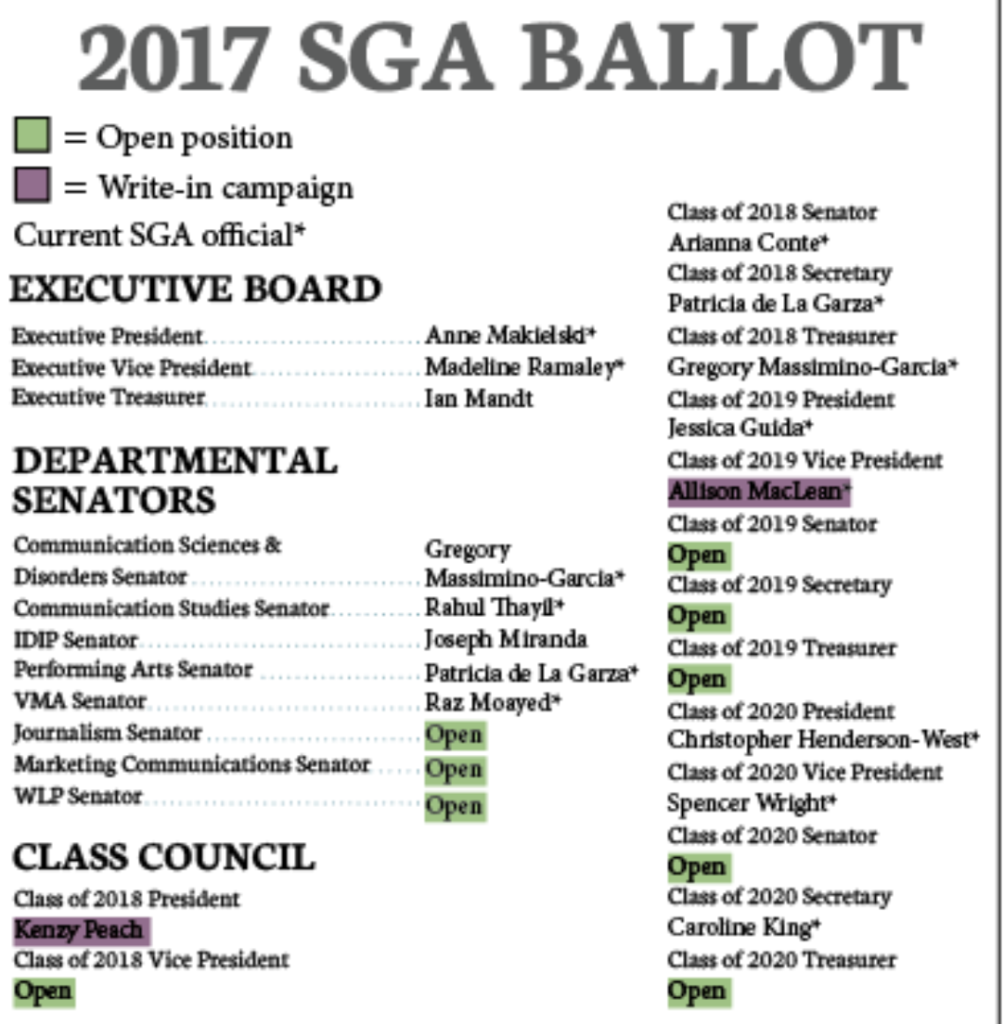 Kenzy Peach started her write-in Student Government Association campaign after she learned no one is on the ballot for the class of 2018 president.

Anne Makielski, who currently holds the position and is running for SGA executive president, emailed the class on Monday to inform students that the ballot for class of 2018 president and vice president positions are empty. She said in an interview that if no one runs for the positions, they will not be filled.

“Honestly, when I heard no one was running, I was really shocked,” Peach, a junior acting and political communication major, said. “I think it’s a valuable and important position. I feel like anyone would be very lucky to have it. I guess not everyone thinks that way.”

Peach said that prior to the email, she was not aware that it was election season and didn’t know when to submit the application to be on the ballot. She said if she had known, she would have applied sooner.

SGA announced on its Facebook page on Feb. 17 that the application to be on the ballot was due on March 3, the Friday before spring break. Candidates were required to get a minimum of 50 signatures and write a statement during the two-week period. If a write-in candidate gets the most votes for a position, they will have to complete the election packet and get the required signatures from students at that time.

“I feel like there is a section of the student body who knows about the election and has resources but [the] majority of the groups [on campus] don’t,” Peach said. “There is a big potential for growth in SGA if more people knew [the] election existed.”

Quinn Madden, a freshman visual and media arts major, said she doesn’t know anything about SGA at Emerson.

“I didn’t even know we had one,” Madden said. “I’m sure they work together to make positive changes on campus.”

Emily Solomon, SGA executive president of three years, said she is aware that many students do not know much about SGA, or its existence.

“This is a problem that has been around since I have been here,” Solomon said. “It was worse when I was a freshman. I don’t want this as an excuse … I only say that as a statement of fact.”

She said student governments at other colleges focus more on planning events, but organizations at Emerson often host their own events, so SGA at Emerson fulfills a different need.

“Our student government does take a behind-the-scenes approach in terms of what we do day to day,” Solomon said. “We are focused on talking to administrators and being [a] more direct liaison between students and administration.”

She said that while most students are not involved with SGA, and she wishes that they would get involved, she understands that people at the college are busy and involved with other organizations.

Senior journalism major Gabriela Kula, SGA executive vice president, said students should still run a write-in campaign, as a lot of the candidates are unopposed and there are a lot of open positions, which will be left empty if no one runs a campaign. There are 11 empty spots where there is no one officially on the ballot.

“I think we need to have more student action, more people showing their voices, more people being a part of student government, and more representatives as a whole,” Kula said. “We need new faces, we need new representations of new areas of SGA.”

Public Relations Chair Christopher Henderson-West, a freshman political communication major, is running for the class of 2020 president unopposed. He said he wants more people to get involved with SGA.

“I feel like Emerson is such a politically charged school, and I don’t see why people aren’t jumping at the chance to be a part of it,” he said. “To me, it is baffling.”