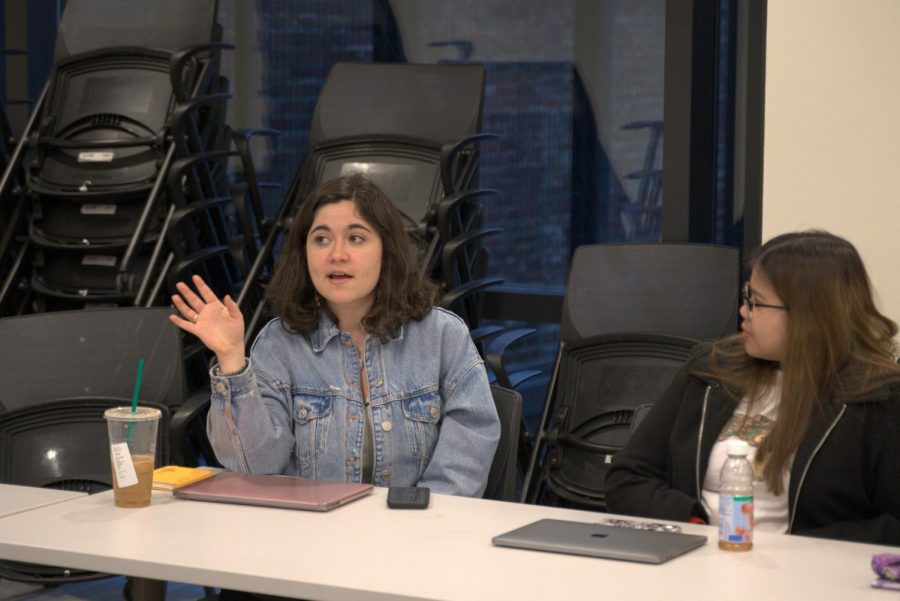 The Student Government Association appointed the first four of out five members of the Executive Cabinet. Photo credit: Yongze Wang

The Student Government Association unanimously voted to appoint the first four members of the newly established Executive Cabinet along with two new commissioners at their second Joint Session on Tuesday.

The executive cabinet is new to SGA, after being officially formed at their first joint session meeting of the semester. Appointments filled the roles of chief of staff, communications director, history and education director, and elections and outreach director.

Senior Gianna Gironda will serve as chief of staff after serving as SGA’s sustainability commissioner for a year. Executive President Will Palauskas spoke highly of Gironda, citing her organization and drive.

“She’s the hardest working environmentalist at Emerson College and so I really want to commend that and I’m really excited to have her in this role,” Palauskas said in an interview.

The role of communications director, which now handles marketing and inner organization communication, will be filled by Hannah Flaherty, a Financial Advisory Board member from the fall semester. She said her focus in the role will be to bring greater attention to SGA and communicate their work to the student body.

“I really want the student body to understand what the Student Government really is doing for them because the people in this room don’t get a lot of press coverage,” she said.

Jay Rosato was appointed to the position of History and Education Director. He said in the meeting that he aims to make the history of SGA more accessible.

“I really have a passion for history–I’d really like to work with the rest of the cabinet and the rest of SGA to make this history better known,” he said in an interview.

Lily Meehan-Egan will serve as the Elections and Outreach Director, the final cabinet position appointed at the meeting. Meehan-Egan said she is excited to recruit new students to SGA.

“I think there are so many fantastic people on this campus who would love to get involved with SGA and just don’t really know how to do that,” she said.

Two commissioners were additionally appointed at the meeting, filling roles that were left vacant at the conclusion of the fall semester.

Joint Session also appointed freshman Eryn McCallum, who currently serves as Associate Chair for Protesting Oppression With Educational Reform, to the role of POWER commissioner. McCallum said her role in SGA will be to address the needs of students of color.

“I feel like SGA’s goals could very easily align with POWER’s goals… we just need solidarity,” she said.

Sophomore Maximo Lawlor was appointed to the role of Fraternity and Sorority Life commissioner, a role he believes could help grow the support SGA gives to Fraternities and Sororities on campus. Lawlor currently serves as the chapter president of Phi Alpha Tau.

“Back in high school, I was the student council kid… I’ve always had a passion for it and always wanted to get involved,” he said. “We can do a lot better of a job being more knowledgeable about the things that we’re both doing.”

Three guests spoke at the meeting following last week’s discovery of swastikas in a stairwell in the Piano Row residence hall: Director of Spiritual Life Julia Avis-Rogers, Vice President of Dean of Campus Life James Hoppe, and faculty advisor of Emerson College Hillel Jake Freedman. Emerson College Hillel is an organization for Jewish students to discuss issues related to Judaism. Freedman and Avis-Rogers emphasized the need for greater education in the wake of the potentially traumatic event.

“I’ve been thinking about the journey we’ve been on as a campus this past week… and what happens as a campus response,” Avis-Rogers said. “Now’s the time to move into education and prevention.”

James Hoppe presented SGA with some of the college’s proposed response plans to the anti-semitic graffiti. Hoppe mentioned four proposals at the meeting, including a sticker placed where the graffiti was discovered that would “reclaim the space.” He added that these ideas are still being formulated and are far from final.

“A suggestion that we [have is to] create some kind of sticker that identifies something happened here, that has some slogan that would try to reclaim that space,” he said.